Home Latest News Can left nationalism stop the rise of the far-right in Germany? 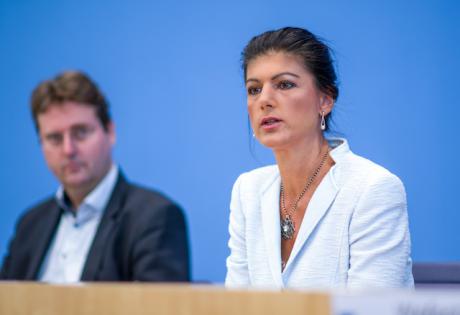 The return to the nation is a trend that marks the politics of more and more European left-wing movements and parties. Those many European social democratic parties that took the path of Tony Blair’s New Labour and embraced globalisation, European integration and economically liberal positions, have become objects of criticism if not outright hostility in recent years. Instead, there has been a return to a nationalist rhetoric.

French politician Jean-Luc Mélenchon and his movement La France Insoumisewere trendsetters in this regard. Founded in 2016, the party deliberately adopted nationalist rhetoric in what they said was an attempt to regain traditionally left-leaning and anti-capitalist supporters who had moved their support behind the nativist Front National. In the years prior, the far-right Front National had successfully branded itself “France’s first working class party” and a sole voice against what it portrayed as a neoliberal EU dominated by German interests. Mélenchon did not shy away from using the same rhetoric during the French elections in 2017, a strategy gathering him almost 20 per cent of the votes in the first round.

In the UK, Labour leader Jeremy Corbyn represents a softer strain of the same trend. His continued strength can at least partially be explained by his ambiguous position on Brexit and the EU, deeply rooted in left-wing Euroscepticism. Through the deliberate lack of a clear standpoint, Labour has managed to appeal both to working class leave-supporters many of whom are keen to reduce immigration by ending EU freedom of movement to the UK, and to younger, more liberal remain-supporters. Corbyn’s preference for national solutions over European ones is widely assumed.

A similar convergence of classical left- and right-wing positions under the umbrella of anti-capitalism, anti-neoliberalism and neo-nationalism is currently emerging in Germany. Similar to the Front National, the far-right Alternative für Deutschland (AfD) has developed a strong social profile over recent years, slowly pushing aside the economically more liberal positions that dominated the party’s inception in 2013. This has allowed the party to become increasingly appealing to traditional left voters.

Inspired by the Front National, AfD-strategists realised that the increasing weakness of the social democratic SPD and the stagnant performance of the far-left Die Linke offers them a prime opportunity. In the end, around a million former supporters of the SPD and Die Linke gave their vote to the AfD in Germany’s 2017 federal elections. The shift in voting patterns was particularly visible in the east of Germany. Much of the AfD’s more recent move to the economic left has been led by Thuringia’s AfD-leader Björn Höcke, around whom a circle with strong links to the far-right think tank Institut für Staatspolitik and its founder Götz Kubitschek has formed. Together with a group of young activists around self-proclaimed national-socialist Benedikt Kaiser, this circle initiated attempts to hijack labour unions with proposals for a more generous national pension, and books published on the utility of left-wing topics for the far-right – a move provoking intense debate at last year’s AfD party conference, where more moderate economic liberals clashed with economic nationalists.

Höcke’s group is embedded in a European far-right network and works in close collaboration with actors from Italy and France, such as Alain de Benoist. Drawing on left theorists such as Karl Marx, but also more recent authors such as Chantal Mouffe and Ernesto Laclau, their central aim is to pave the way for a critique of capitalism from the right and to reconcile it to far-right ethno- and anti-immigration politics.

Another author applauded by Höcke’s group is Bernhard Stegemann, now close political friend of Sahra Wagenknecht and intellectual co-initiator of Aufstehen. In 2017, he published the widely received book “The Spectre of Populism” arguing the case for a leftist populism standing up against the hegemony of neoliberal capitalism – a book that was equally celebrated by intellectuals on the far-right. Together with Wagenknecht, the vocal and media savvy leader of the Die Linke faction in the German parliament, internationally renowned political economist Wolfgang Streeck and politicians from the SPD and the Greens, he declared the official start of Aufstehen in Berlin last summer.

In the accompanying press conference, Wagenknecht claimed that German democracy is in a deep crisis, a crisis which, according to her, is also the driver behind last year’s violent clashes and far-right protests in Chemnitz. For her, the rise of the AfD is not a cultural but primarily a socio-economic question that has to be addressed from the left. More recently, she attempted to gain momentum from the “yellow vest” protests in France by posing in a yellow vest in front of the German chancellery and calling for a similar movement in Germany.

Wagenknecht has repeatedly called for the limitation of immigration into Germany in order to stabilise the welfare state. While large parts of her own party attacked her for this position, she was applauded by Höcke’s group on the far-right, which called her an “isolated sign of hope in a leftist parallel society”.

In the light of three upcoming regional East German elections in 2019, sending signals to the right on migration may seem an intuitive electoral move. Here the AfD has started to become a serious threat to Die Linke’s claim to be the obvious representative of East Germans. In Sachsen, Brandenburg and Thuringia recent polls see the AfD between 21 and 25 per cent, levelling with or even ahead of Die Linke. At the beginning of this year, the AfD’s persisting strength and its emphasis on a more generous pension system even pushed the CDU into calling for a reform of the pension system that would take into account those East Germans who lose their jobs after reunification.

Giving frustrated voters a left-wing alternative for restricted migration became a key selling point for the Aufstehen movement. Combined with the first German attempt to start a non-partisan movement a la Macron’s En Marche, Corbyn’s Momentum and Mélenchon’s La France Insoumise, this it was hoped would mobilize non- and young voters yearning for new and alternative political options. But the first polls have already raised doubts about this, suggesting that Aufstehen so far primarily appeals to an older, more socially conservative and economically left-leaning electorate while largely meeting uninterest among young voters.

However, the appeal it has to the far-right with its anti-immigration rhetoric is another matter. It is a  dangerous game that could end up not weakening but strengthening the AfD. Rather than representing the genuine, forward looking and innovative movement it pretends to be, Aufstehen can also be seen as yet another sign of the normalisation of a new nationalism, this time in the German left – a nationalism driven by the nostalgia for allegedly better times before globalisation and Europeanisation took over, seen as the primary cause of the financial, Euro and migration crises that have shaken Europe over the past decade.

In the long term, Aufstehen might have the chance to shake up Germany’s political landscape. Whether this is for better or for worse remains to be seen. What appears rather more certain is that the AfD strategy to adopt a leftist-anti-capitalist rhetoric will make the party one of the strongest competitors in the upcoming East German elections.