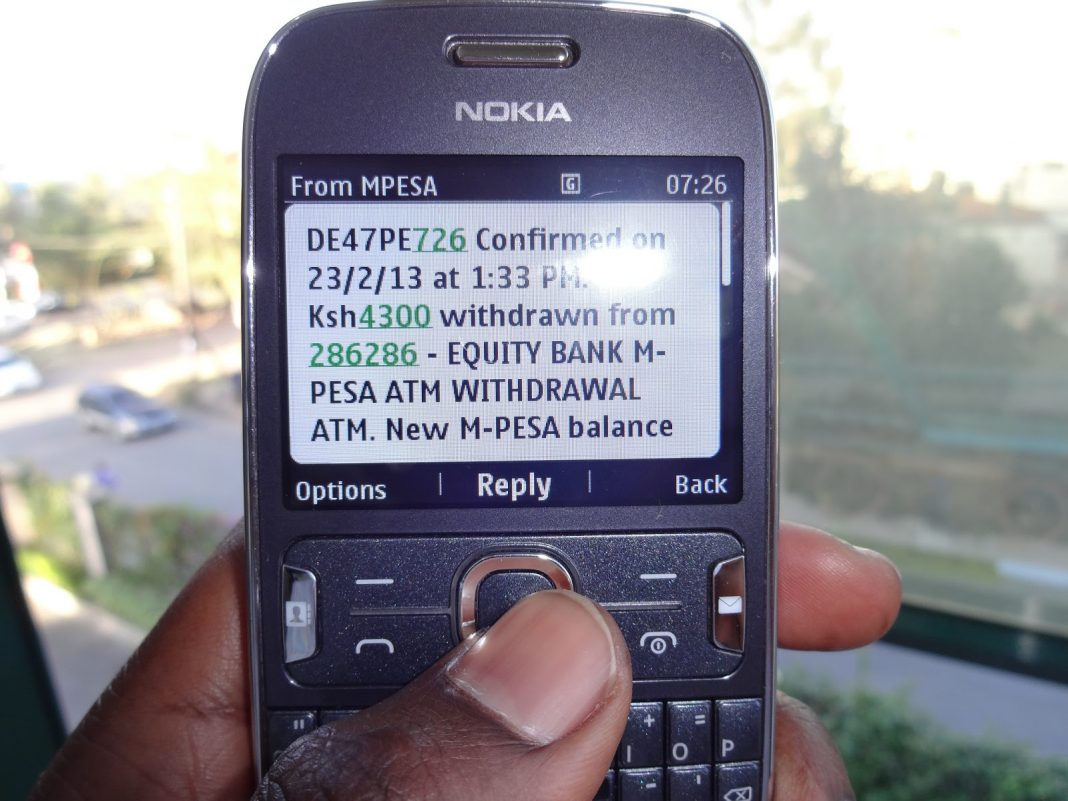 When farmer Isaac Tondo fell on lean times in Liberia’s long rainy season, his brother in the capital sent 8,000 Liberian dollars ($87) to his Lonestar mobile money account, ensuring his children’s school fees would still be paid.

Across Africa more and more people — from urban start-ups to hard-up villagers — are now spending, saving and planning for the future through banking services offered by mobile phone companies. And experts believe growth and poverty reduction will follow, if certain key risks are managed.

Tondo’s brother used to entrust cash with contacts passing through their home village in Grand Gedeh county, but the roads are so bad they can no longer access it.

“The only means of receiving money from Monrovia is through mobile money,” the farmer said.

Collecting and depositing cash at omnipresent kiosks and sending money via text message has fast become the natural solution in African nations where distances are often long, roads and infrastructure poor, and few have access to traditional bank accounts.

Africans are “leading in the world” in their uptake of mobile banking services, Mitsuhiro Furusawa, Deputy Managing Director of the IMF told AFP at a recent conference on promoting access to financial services in Dakar, Senegal.

The IMF has said the potential for further financial development is “substantial” on the continent, and that wider access to banking services could unlock an additional 1.5 percent in annual growth.

Payment systems such as Orange Money in west Africa, M-Pesa in Kenya and Tigo Cash, used in several nations, have become incredibly popular in recent years in sub-Saharan Africa, where the vast majority lack physical or financial access to traditional banking services.

Around 11 per cent of Africans now have a mobile banking account, according to the IMF, rising to 60 per cent in Kenya.

The average figure for the rest of the world is two per cent.

While Kenya, Tanzania and Uganda lead the way in east Africa, Côte d’Ivoire is the bright spot in the west of the continent, where 25 per cent of the nation uses such services.

Jean Marius Yao, President and Director General of Orange Money in Côte d’Ivoire, believes the market is far from saturated.

“There is a big margin for improvement, with some sectors not being fully served, notably rural communities and women,” he said.

One other area of growth was likely to be those who already had traditional bank accounts, he said, including employers paying wages via text.

“The flow is going in both directions,” Yao added.

Africa’s enthusiastic adoption of mobile banking has evolved from a simple way to transfer cash into an entire parallel system of micro-payments of everything from saving accounts to business loans.

Countries such as Kenya could give a glimpse of how the sector will evolve across the continent, said Roger Nord, Deputy Director of the IMF’s African Department.

“There is a very clear relationship in economics between financial development and economic growth and poverty reduction,” he added.

In Ivory Coast, Orange Money offers savings accounts, collective financing of large-scale projects and life insurance to a population previously largely locked out of such services.

Meanwhile East African companies are now able to collect small payments every day for purchases made by clients unable to save up large sums to pay at the end of each month, Nord said.

In Asia above all, others have taken note: Afghanistan now pays police salaries by mobile, while India has just launched an ambitious national payments system for smartphones.

But these systems’ ease of use also pose a significant drawback, however.

The Economist Intelligence Unit (EIU) has described mobile money fraud as “a huge problem,” citing a Kenyan Central Bank study that showed 37 per cent of mobile money transactions were fraudulent compared with 10 per cent by banking agents.

Poor encryption and a proliferation of scams including fake “rewards” offers by text and phones that mimic telephone identifier codes were also a huge problem, the EIU said.

But mobile companies are getting smarter every day, mapping consumer behaviour and judging credit-worthiness from the results.

A recent report by the Washington-based Brookings Institute cited a study in Brazil that showed one month of pre-pay activity provided sufficient information to determine credit risk.

“The data that this generates: people who are saving a lot, saving regularly, suddenly we knew who were the reliable risks and suddenly they were given access to small loans,” Nord commented.

Written by Jennifer O’Mahony and Zoom Dosso in Monrovia