Home frontpage So bye polarity as the manic strong men cast off the old... 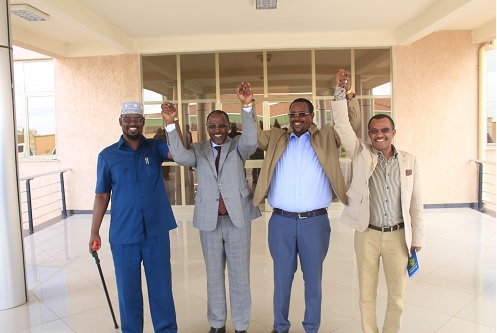 MOGADISHU (HAN) May 10.2016. Public Diplomacy & Regional Security News.  By Ali Sheikh.“But there is neither East nor West, Border, nor Breed, nor Birth, When strong men stand face to face, tho’ they come from the ends of the earth!” Rudyard Kipling’s Poem

History is an interesting stage show; sometimes it comes as a big drama on a small stage, while other times it gives the personal-wit hard time to believe reality of life. What is more, when events unfold at a time of uncertainties and misgivings that saturated the minds and hearts of the people, the eyes will remain stuck in a rut if events turn otherwise on the account of magical impossibilities within a short period of time. History is beautiful, it paints beautiful colors on the events of the past regardless whether disastrous or prosperous, at the end, it present different reflection.

Nearly 30 years ago, there prevailed highest nastiest and rhetoric malice wrapped with extreme dislikes and sadistic stories between Ethiopia and Somalia. Even long before that (more than five centuries), adversary narratives of large extent lived between these two countries which the nature threw them on the same geographical showground—(Horn of Africa) that kept populace apart. Here is Somali proverbial hate stories; “very old hostility exist between children and hyena, despite the fact they never meet each other face to face”  if the past leaders of Ethiopia and Somalia were genuine, the two country would have been more closer to each other than they were by the time they fall from their rule. The public normally believe what they were told by their politicians or intellectuals, these two countries intellectuals never put much time to emphasis the values and virtues they share contrary to what they hear from their leaders. Thus it reminded me the stereotype and anthropological misconception of Castelnau work.

Francis de Castelnau—the famous Frenchman writer published a book in 1851 in which he claimed scientific evidence that there was a “tribe” in the central Africa called “Niam-Niam” who had tails and whose sole piece of furniture consisted of wooden benches with a whole in them to accommodate the tail (Cohen 1980:242; Miller 1985: 3-4)

Castelnua’s evidence was based upon the historical prejudiced reports attributed to the Negroes of Sudan by the Arabs and the Europeans to scare and insert hate atmosphere for their people so that they avoid inter-marriage interaction and socialization with this African tribe treated as slaves. Although majority of the population on both sides of these two countries (Ethio-Somalia) reserved the notion that such long standing bad feelings among themselves would not end very soon. With the passage of time, the situation changed and a new episode of history between these two countries is now on the making. It’s not a new thing according to the recorded history in Eastern Africa, or other part of the world to have same nationalities or ethnic groups who maintain the same ancestral linkage and by the same token stretched across over two or more countries in which each of the group uphold electorate loyalty and peaceful relationship even though they are under different countries with diverse constitutional dispensation. The Luo community of the Nilotic Afro-language group lived across five Eastern Africa countries, for Example, the Luo tribe in Northern Uganda which is a flat lowland area bordering Kenya, South Sudan and the Democratic Republic of the Congo, their Kin align themselves for the purposes of exchange of trade, marriage, and maintain peaceful political alliance that formalized and bridged wider cooperation across the respective countries they lived. Visiting and being visited is the major source of pleasure for the Luo. The social principles regarding kinship impose a heavy schedule of ritual obligations on Luo tribe, regardless of their country of residence. Attendance at funerals, no matter in which country is held a significant obligation for all Luo community, thus governments of different countries offer especial cooperation to ease immigration rules and mobility. If Lou tribe who maintained “early culture” could easily formulate and uphold such significant relationship of politically stable and peaceful environmental with their kin across five countries, what can stop the Somalis across Ethiopia, Somalia, Djibouti and Kenya who share strong kinship, culture, language and over all adopt same heavenly religion (Islamic faith) to peacefully co-exist and carry out cultural and political stability across their respective country of residence?

Another handy example is the Fulani tribe in West Africa countries. The Fulani people lived mostly in three countries; Nigeria, Senegal, and Guinea. In these countries, Fulani became the centerpiece connecting the trade and stability across three countries in West Africa. The Fulani tribe in their folklore believed that with their cattle emerged from a river, practice pastoralism as economic activities, thus their mobility in crisscrossing three countries’ borders were eased largely by their strong kin connection while respecting laws and regulation under which they live correspondingly. Despite the fact that they exist across these countries, they still maintain their cultural and physical attachment through, trade, intermarriage arrangement and symbolic traditional leadership honored all the Fulani people across the three West African countries. The language of the Fulani is known as Fulfulde (or Fula or Pulaar). Even though there are at least five major dialects, still Fulfulde is the only language predominantly identified for the Fulani tribe. For a Fulani person living in one of these three countries will not violate rules and regulation practiced across the other country where his Fulani relatives live in case he/she visit. To uphold such practice crosswise along the tribe, the Fulani people have take on a handy and cautious proverb that goes; He who hits his neighbor’s knee, curls up his own legs. Which means, beware, if you hurt someone’s values and virtues, then it’s likely that someone will hurt yours. The innovative president of Somali Regional State of Ethiopia Mr. Abdi Mohamud Omar’s initiative to converge in Jigjiga the Jubbaland regional administration and Galmudug presidents of the federal republic of Somalia as well as other leaders from the federal Somalia was the long awaited strategic collaboration and start of a new hope and historical chapter that cast away proxy old feeling of resentments and hatred. President Abdi Mohamud Omar in his speech over the courtesy dinner held Jigjiga for the two regional presidents of Jubbaland and Galmudug noted that, “It’s true that with the leadership presence of General Mohammed Siyyad Barre and Col. Mengistu Hailemariam of Somalia and Ethiopia respectively politically wouldn’t have been possible for us Somalis (Ethiopian Somalis and Somalis in Somalia republic) to meet in Jigjiga in the interest of cooperation against our common enemy” Somali Regional State has now a lot to share and offer to their brothers in Somalia federal republic, in that before seven years ago, Somali Regional State was among the least educated in the Federal Democratic Republic of Ethiopia, with barely less than 5 per cent of the population ever making it into schools and with the highest dropout rate in the country. Not only that, in rural parts of the region most never made it to school at all due to absent of educational facilities. Since the last five years, Somali Regional State annual budget for last fiscal year alone hit over $ 500 Million dollars, in which 42% are recurrent budget. The region now has more than eighty six thousand employees who are on regional government payroll. Within a period of five years only, Somali region got more than 2552-km federal roads of which 814 –km is tarmac/asphalted that goes beyond and to the most inaccessible districts and zones in the region, the most interesting in Somali Region this days is that, all the districts and zones have got well design master plan making the towns good-looking, well visible and attractive. This development and stability in action in Somali region of Ethiopia can be a very good showcase in which the regional states in the federal Republic of Somalia can borrow and ask technical support for their respective regions in Somalia. So bye polarity as the manic strong men convergence in Jigjiga to once and for all mold off the old Ethio-Somalia historical malice and pledge for oneness in all spheres of collaboration and corporation. As part of his gifted innovations President Abdi Mohamud Omar may also invite the three counties Governors of North Eastern Region in Kenya for further cooperation and share with them experience beneficial to their respective counties in North-Eastern province.

The writer can be reached at Dhagaweyne3@gmail.com