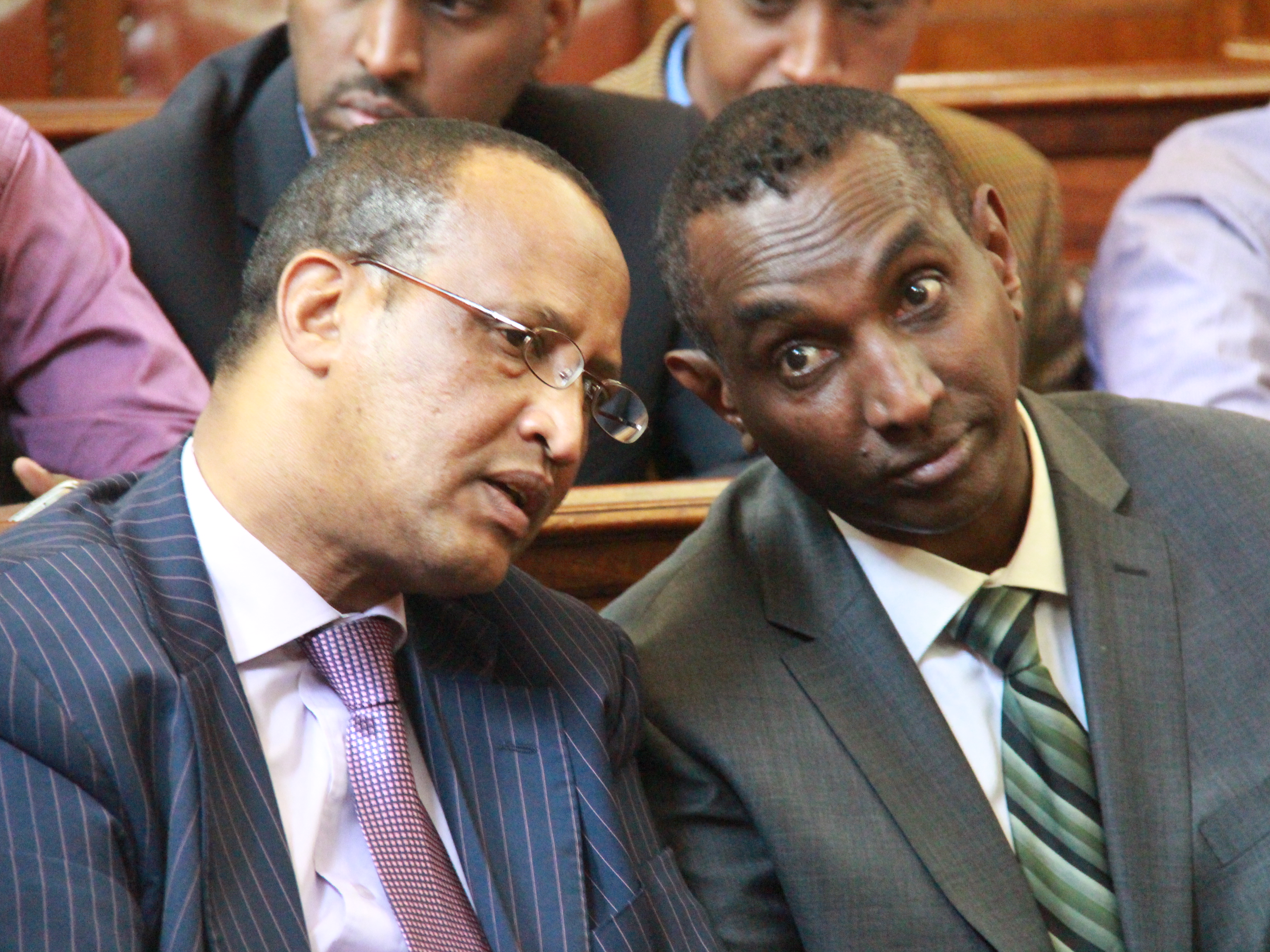 GARISSA (HAN) August 2.2016. Public Diplomacy & Regional Security News. By Ali Sheikh. For sure, this opinion article has no interest in taking sides on the basis of political party affiliation, tribal ties, or the mere emotional feel of fondness against one over the other. The outcome and the ruling expressed on this page I supposed has nothing to do with exaggeration and fabrication, but is what has lived in your minds and hearts (Garissian) for quite a long time. But ended up unaddressed throughout the political span ranging from 2002 up to the present day. By the same token, It’s my expectation that Garissa County intellectuals have long graduated from unconstructive interpretation of healthy opinions reflecting realities on the ground as “hate-thoughts.” Thus, an opinion is just, but  judgment or estimation of the merit of an issue/person or thing, in other words, it’s a paltry preposition given on account of special knowledge of a particular thing or circumstance. Consequently, It’s the responsibility of the learned people to shed light issues of paramount importance to the community in a pertinent way for the search of “good.” It will be of myopic for any thinker or learned not to beat the drum to wake up “shot makers” (voters) so as to prevent the same mistake to happen come 2017. As fortune would have it, on 10th  March 2013, Governor Nathif Jama Adam was elected on  Wiper Democratic Movement party ticket. The shifting from centralized to the devolutionalized County system, particularly in NEP region was, thought it to be the final  hope to stamp out resource marginalization in North-Eastern Region. NER region suffered under the successive centralized government ever since Kenya was born. Garissa County people, like any others in the country expected that true sense of development will be at their reach. That lots of the idle youth tarmacing will be employed, better health services for all centres in the urban and in the rural will be fixed. Poor student will get priority educational support from the County resources. Special schools with state of the art equipment for the increasingly children with disabilities in the county will be put in place. That everyone will soon drink clean water flowing 24/7. Improved value chain for the local agricultural produce will be regulated and maintained. Seasonal fruits produce; tomatoes, banana, onion, pawpaw, mangoes, oranges to name but a few will enjoy appropriate market linkages at County level as well as lobby for across-counties market with the support of the County government. Lastly but not the least, Garissa Town will no longer be a stinking town. What happen to those wishes? All those anticipations crushed in a span of four years if not less than. One elder (name withheld), in a kangaroo discussion once said”

“At first, when I heard a system of County Government, I thought that revenues that use to go Kenya government pock is now back to our disposal, and that we will be salaried on monthly bases. Forget about salary for everyone, even the those government employees, the medical personnel in the hospital’s  ordinary salaries are in a question mark.”

It’s true to say that, Governor Nathif had no any political experience before 2013. He overstayed abroad as a technocrat for economic reasons (Job). He had had a good record as a manager but not as a political leader. There were many things he pioneered that deserves appreciations; such as, the thinking of having an Islamic bank in Kenya right after high school, as one of his classmates put it. He was also the  founding managing director of the First Community Bank (FCB) in Nairobi and had remained with the image of an authority in the banking industry. Governor Nathif made the wrong choice in joining politics at the eleventh hour of his life.

Everyone is good in some aspect of life, but no one can be good for everywhere, anywhere.  If anyone feels that because of being good in one position, he can be as well good in everywhere, then that person will become too passive for his own good. And he will be fitting in  the Nirvana on Nirvana song “you know you’re right.” As a result of that mistake on the part of Governor Nathif, many good things are no more in existence, for instance:

June 2010, the International Police report expressed that Garissa town is the safest town in East and Central Africa. On top of any Kenyan town, Garissa appeared as a classical example to talk big among Kenyans and attracted lots of investors, while others were on their way to invest Garissa. Everyone in Garissa could speak volume in public and in private to brag the success they achieved. Unfortunately, the model town since 2013 misshapen and turn to be “boiling hell” forget about staying in the town, thinking about it led others sleepless nightmare. No more investors, no more peace and security. In early April 2015, the worst assault carried by Al-Shabaab militia in Garissa killed 147 innocent university students and left 80 injured if not more than. The following month in the same year, that is, on the eve of  25 May, 2015 the Al-Shabaab’s brazen attack claimed 20 police officer’s in Yumbis village, under the Fafi sub – county jurisdiction. What is more, the daily needs of life such as; Health services, water and electricity are no more for all everyone’s right, but the facts are, “do you anyone?” These days, in Garissa the water runs twice in a week if not less than, and if by chance water-run is eased, its either mud-spattered or over chlorinated. However, in the 1970s, scientists discovered that when chlorine is added to water, it forms Trihalomethanes (THMs), one of which is chloroform. THMs increases the production of free radicals in the body and are highly carcinogenic (cancer causing). Its strongly believed that cancer risk among people using chlorinated water is as much as 93 percent higher than among those whose water does not contain chlorine,” according to the U.S. Council of Environmental Quality.

In another related study, the drinking of chlorinated water has finally been officially linked to an increased incidence of colon cancer. An epidemiologist at Oak Ridge Associated Universities completed a study of colon cancer victims and non-cancer patients. The study concluded that the drinking of chlorinated water for 15 years or more was conducive to a high rate of colon cancer,” according to Health Freedom News. With that in mind, in Garissa County, this year alone, of I know, more than 13 people died of cancer in Garissa and twice more than that are on the verge of being a casualty of cancer (God forbid).

To a large extent, from Monday to Monday through Tuesday, the G-County resources ran unshod across the pipes and down the road of Integrity House, Nairobi, just to save the name. While the rest goes to the accumulation box to buy votes come general election in 2017. The Kenya Auditor-General Edward Ouko in his report on July 2016 noted that among other counties, Garissa had excess spending and irregularities by referring to the financial statement for the year ended 2014/2015 which projected a lot of unaccounted withdrawals.

Not to know is bad, not to wish to know is worse, by now everyone in Garissa is aware that corruption in the County is like the way whirlwind is to hay (Read Nathif). Inter and intra clan conflict ensued in the County. Nearly a year ago, tribal clash sprouted on the borderline between Shanta Abak (Garissa Country) and Meri town (Wajir County) unnecessary losses of lives and properties occurred. This year alone, the worst conflict in the history of Garissa County occurs in one of the most commercial towns of Garissa County. Killing and counter killing, burning and counter burning ashes into ashes go after. The fundamental causes of “Dujis conflict” between the brethren Abudwak against Auliyahan of Ogaden progeny were basically blamed on the dissatisfaction of the County administration leadership.

With better administrative experiences, headship skills and transparency, Garissa County will have been the most prosperous both in safety and in trade.  Nevertheless, it will imperative for one to be guided by motive rather than emotion, you all practically witnessed what is going on in the County, the true sense and the feel of government presence is now mysterious. If anyone is thinking to bring back Governor Nathif, then prepare for the worst. Even though his family as well as his “Muqarabiin” (his inner clique), the political pundit who really supported him during the 2012 election, advised against running for election 2017, and instead recommended him to step down from politics. Other than that, Governor Nathif doesn’t want to compromise anything less than another term in Gunberitoarial position. Garissa County voters’ choice will design the destiny they wish to live in come 2017. For sure, brother Nathif with time proved politically incapable. To elect him back to the same seat will never bore witness of wonders; as the reverine Somali-Bantu saying goes;  no matter how long a log stays in the water, it doesn’t become a crocodile.

For comments and quotes, the writer can be reached at Dhagaweyne3@gmail.com