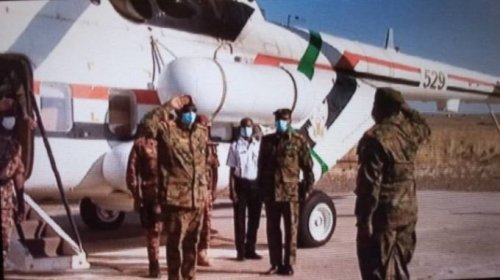 December 17, 2020 (GARAREF/KHARTOUM) – The head of the Sovereign Council Abdel Fattah al-Burhan Thursday inspected the Sudanese troops deployed on the eastern border, following an attack by the Ethiopian forces and its Amhara militiamen on Tuesday.

The Sudanese government and political groups voiced their support to the national army and condemned a coordinated attack by the Ethiopian army from the neighbouring Amarah region.

The attack, intervened as Addis Ababa sought Sudan’s neutrality in the conflict with the recalcitrant TPLF of the Tigray Region and after the deployment of Sudanese troops along the border.

In a short statement released on Thursday, the Sudanese army stated that al-Burhan was in Gadaref to inspect the Eastern Command and the troops deployed along the border with Ethiopia.

He was accompanied by the Chief of Staff Mohamed Osman al-Hussein and senior military commanders.

In a short extract of his speech to the troops released after the visit, al-Burhan who spent most of his carrier in the border army enumerated all border towns with the neighbouring countries and vowed to defend it.

An army officer and three soldiers were killed, in addition to 27 soldiers injured during the attack on Tuesday evening the Ethiopian army.

The Sudanese army force “came under artillery shelling from the Ethiopian troops that sneaked into the Jebel al-Teyyour area at a depth of 7 km in the Sudanese territory,” a soldier told the Sudan Tribune.

He further said they were surprised by the heavy shelling and attacks from several sides.

“The attack tactic suggests that it was the work of organized forces and not just militias,” he further said.

Other military told the Sudan Tribune that assailants belong to the Amhara ethnic group intending to stop the deployment of the Sudanese army in the areas cultivated inside the Sudanese territory by Ethiopian farmers.

The Amhara Region army and militias are heavily involved in the war against the TPLF of Tigray Region.

The former President Omer al-Bashir had ordered to tolerate the presence of Ethiopian farmers in the Sudanese border area. However, al-Burhan seemed determined to change the situation, after the regime change in Khartoum.

In statements to the BBC Amharic, on Thursday Dina Mufti Ethiopian Foreign Ministry Spokesman said the attack “was a precautionary measure when some Sudanese militants tried to cross the border and try to seize the farmers’ property”.

He implicitly admitted that the military operation was implemented by the government forces when he spoke about the precautionary measure without saying who carried it out.

For his part, the Prime Minister Abiy Ahmed said that “The (Ethiopian) government is closely following the incident with the local militia on the Ethio-Sudan border,” he wrote in a tweet posted on Thursday.

He did not explain whether it is about a Sudanese militia or an Ethiopian one.

“Such incidents will not break the bond between our two countries as we always use dialogue to resolve issues. Those fanning discord clearly do not understand the strength of our historical ties,” he further said.

The Ethiopian prime minister was very popular in Sudan and appreciated by the government officials.

However, the good cooperation and friendly relationship between Addis Ababa and Khartoum are now experiencing troubles after the repeated attacks by the Amhara soldiers and militiamen and the recent statements by a parliamentary committee accusing the Sudanese army of backing the Tigray rebels.