Home frontpage Fahma Mohamed to be one of the youngest in the UK to... 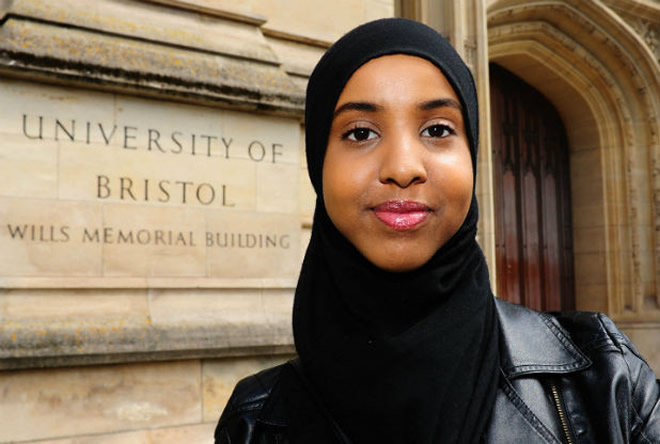 BRISTOL (HAN) July 13.2016. Public Diplomacy & Regional Security News.By Michael Yong. A teenager from Bristol is set to become one of the youngest doctorate holders in the city – before she has gone to university.

Fahma Mohamed will be awarded the Doctor of Laws by Bristol University – an honorary degree acknowledging her campaigning work to end female genital mutilation (FGM).

The former City Academy pupil will be starting university at Kings College London this September, taking on an undergraduate degree in Biomedical Science.

But before she even starts her new adventure, the 19-year-old will be given the doctorate this Friday at Bristol University’s graduation ceremony.

Fahma rose to fame after she led a campaign to end FGM – with charity Integrate Bristol – nearly five years ago.

Then just 14 years old, Fahma bravely spoke out about the horrific acts of FGM in Britain and violence against girls.

Two years ago, she fronted a national campaign to stop the abuse, with United Nations’ secretary general Ban Ki-Moon meeting her and directly praising her work.

She also launched a petition and wrote a letter to then Education Secretary Michael Gove, asking them to protect every girl from FGM.

The campaign culminated in compulsory training for public sector workers to help teachers, doctors and social workers identify and assist girls at risk.

You would think Fahma would be outspoken and loud, but she admitted she was once “shy” and “reserved”.

The former Weston College student, who is finishing her gap year before university, told the Bristol Post she was honoured to receive the doctorate.

“I couldn’t believe it when the university told me,” she said.

“I had just started school at City Academy where Lisa Zimmerman (from Integrate Bristol) was my English teacher at that time.

“We kept hearing about the charity and the work that was done there, but I had no idea what FGM was. I was even more shocked it was practised in Bristol – in Britain.

“It was such a taboo subject that no one talked about it.

“I knew then I wanted to get involved with the charity. I was quite shy and reserved at first, but they helped me grow into it.

“I kept thinking about how helpless the girls [victims] were feeling and that was what motivated me to keep going.”

She is now looking forward to the ceremony this Friday, which will be held at the Wills Memorial Building.

“I’m quite nervous, but it’ll be nice to have my family there with my friends,” Fahma said.

“It can be quite overwhelming, but I’m really looking forward to it.”