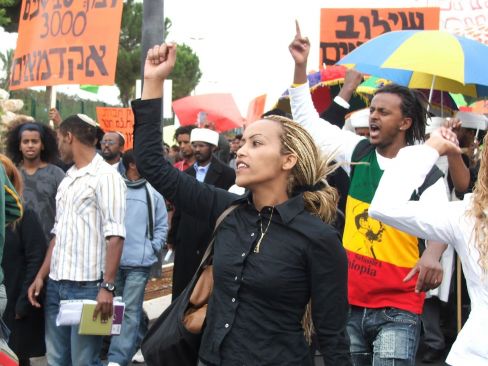 By Omri Bezalel. Israeli Prime Minister Menachem Begin called the head of Mossad, Israel’s intelligence agency, into his office in 1977 and said to him, “Bring me the Ethiopian Jews.” What followed were a series of missions by land, sea, and air that brought more than 56,000 Jewish Ethiopians through Sudan into Israel over eight years. It was a highpoint in Israel’s history, followed immediately by a massive failure to integrate Ethiopians into Israeli society—a failure that carries immense consequences for today’s young Ethiopian-Israelis who experience racial discrimination and sometimes feel as though they’re not part of Israeli society.

The scale of the calamity can be found in demographic statistics. There are about 140,000 Ethiopian-Israelis living in Israel, about 50,000 of whom were born in Israel. Sixty-five percent of Ethiopian children live in poverty and one-fifth are incarcerated in juvenile detention centers. Less than 11 percent of Ethiopian-Israeli high school students are eligible to graduate. One in five Ethiopian-Israelis—five times the number for the general population—are jailed during their military service, making up 12 percent of the military prison population but only 2 percent of the military. There are fewer than 40 Ethiopians (one out of 3,000) who practice law.

Today’s problems can be traced to the integration process Ethiopians went through when they first came to Israel. Addisu Masale, the first Ethiopian elected to the Knesset, remembers the segregation starting on arrival when he and others were put in permanent public housing. But these projects didn’t exist in prospering neighborhoods, which feared property devaluation; it was the neighborhoods lower on the socio-economic scale that were forced to take in the newcomers. Non-Ethiopian residents soon left, leaving the Ethiopian community isolated from the rest of Israeli society.

“In that way,” Massale said, “the schools and kindergartens, the offices, the neighborhoods, everything naturally became 100 percent Ethiopian with no connection to the rest of Israeli society, and no integration whatsoever.”

Masale, 63, was born in a Jewish village 500 miles north of Ethiopia’s capital, Addis Ababa. He went to a Jewish elementary school where he heard fairytales about Israel as a place without death and illness. The communist regime in Ethiopia at the time had many citizens looking for asylum in neighboring countries, and Zionist Ethiopian Jews, including Masale’s family, escaped to Sudan in hopes of making it to Israel. As many as 4,000 people died during the journey.

Masale recalls a long history of discrimination in Israel that led him to organize protests. In 1985, the Chief Rabbinate of Israel questioned Ethiopians’ Judaism and decreed they all had to convert; in 1996, the Ethiopian-Israeli community found out the blood bank was throwing away any blood they were donating.

Pnina Tamano-Shata immigrated to Israel from Ethiopia in 1984 at the age of three. Even though she excelled in school, she was routinely taken out of class to attend reinforcement lessons with other Ethiopian children.

“The separatism starts with the basic misperception that Ethiopians are weaker, based on the old reality of Ethiopians from 30 years ago who came to Israel with little or no education,” Tamano-Shata said. “Educators have projected this view onto students, many of whom have been tracked down special educational programs that don’t necessarily fit their skills or ability, and that isolate them in a homogenous environment that hinders their development and integration with Israeli society.” This separation leads to isolation, hostility, frustration, and increasing differences between Ethiopian children and their peers.

Israeli society has also been unwilling to accept Ethiopian-Israelis. In a 2013 Ministry of Finance survey asking employers which demographic groups they most preferred hiring, Ethiopians came in last after women, people aged over 45, people with disabilities, immigrants from the former USSR, Orthodox Jews, and Arabs. A 2012 survey by Geocartographica said that less than half of non-immigrant Israelis supported mixed classrooms, and only a quarter would allow their children to marry Ethiopians.

In an opinion piece called “I’m Not Your Cleaning Lady” for Ynet News, Israeli-born Esther Bisur gave examples of society’s institutionalized racism through her day-to-day interactions. These included strangers offering her jobs as a housekeeper, constantly being asked “when did you immigrate to Israel,” and her non-Ethiopian boyfriend being commended for “volunteering with the Ethiopian community” when seen together with her and her family.

This ongoing discrimination—along with greater awareness of the situation, through means such as a viral video of an Ethiopian-Israeli soldier beaten by a police officer—led to massive protests in Tel Aviv last year. The demonstrations were organized by a new generation of Ethiopian-Israelis, most of whom were born and raised in Israel. They claim they’re treated like second-class citizens and refuse to carry on what they consider to be their parents’ generation’s passive mentality.

“The older generation was content in fulfilling the dream of coming to Israel, and then were too busy surviving,” Tamano-Shata said. “The younger generation is fighting for its place within Israeli society, navigating its way between their love for their country and the many blows they absorb based on their skin color.”

While the situation for Ethiopian-Israelis has improved in recent years, many in the community agree they should be more involved in decision making. Various government and civil society programs have attempted over the years to close the gap between Ethiopian-Israelis and the rest of the population, but program leaders have, in the past, mostly been non-Ethiopians. This has led many in the Ethiopian community to see these programs as another means of differentiating them from the general population.

Many in the Jewish community in the U.S. and abroad, out of true concern, have insisted the money they donate be used to help Ethiopians. This has led Israel to fund segregated programs that haven’t helped integrate Ethiopians. Tamano-Shata, who won a seat in the Knesset in 2013, pushed to pass a bill that said donors couldn’t dictate where their money went, allowing funds to be allocated in ways that meet the true needs of the community.

One of Tamano-Shata’s solutions is to have differential treatment in the budget, but integration in practice. For instance, instead of budgeting for Ethiopian youth centers, money would go toward providing Ethiopian children vouchers to attend community centers with the rest of the neighborhood children.

Masale believes there must be one authority in charge of all Ethiopian-Israeli matters, from policy regulation and distributing funds to publicity efforts that inform the public about the community’s history and culture in an effort to get rid of the stereotypes and ignorance that fuel discrimination.

On the one hand, things are better today than they once were. Two Ethiopian-Israeli female judges were recently appointed, the Ethiopian community is becoming more involved in decision-making processes, and there are many people, in and outside of government, who are working toward further improvements. This year, the prime minister signed a policy stating the Ethiopian National Project must spend its $130 million annual budget on programs that promote integration. But social media has also made the Ethiopian-Israeli community more aware of the injustices happening around the country as more cell phone footage, personal stories, and investigative journalism bring to light the harsh barrier of racism Ethiopian-Israelis face today.

“The flag of immigrants still waves in Israel,” Masale said. “People want immigrants in Israel, just not in their backyard.” Israel prides itself in being a beacon for Jews everywhere, and even has a Law of Return that promises citizenship to every Jew who wants it. But the true challenge of that promise isn’t in bringing Jews to Israel, but in what comes after.

Eritrea The Most Peaceful country in the Region: Farah Maalim

Ethiopia: Army Says It Is in Control of Tigray Capital

Eritrea: Abey Ahmed “A True Beacon of Peace and Liberty”

geeskaadmin - December 3, 2020
0
Asmara (HAN) December 4th, 2020. Public Diplomacy and Regional security. During the EPRDF/TPLF rule, the Eritrean border dispute with Ethiopia was embedded within a...