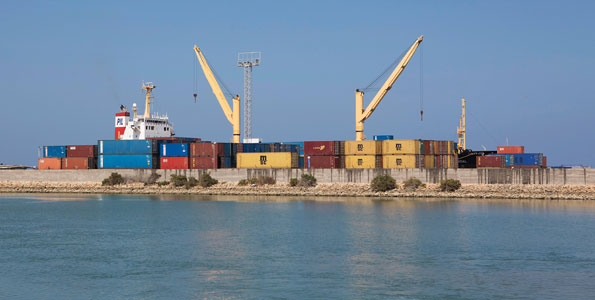 HARGEISA (HAN) June 1.2016. Public Diplomacy & Regional Security News. Creaking wooden fishing dhows bob alongside each other in the sparkling blue waters of the port of Berbera, a key trade point along one of the world’s busiest shipping lanes.

But big changes could be coming. While container ships are rare here in the main transport hub of the self-declared republic of Somaliland in northern Somalia, a contract just signed with Dubai’s giant global port company DP World will see the port developed.

For Somaliland, unrecognised as a country despite 25 years of de facto independence from the war-torn rest of the Horn of Africa nation, the planned port development symbolises hopes of being taken more seriously as a nation.

For now, the port mainly exports sheep and camels to Gulf nations, and the some 40,000 containers it handles each years are but a tiny fraction of the 900,000 containers shipped through the far larger neighbouring port of Djibouti.

The Dubai port investment is not only a financial windfall of hundreds of millions of dollars, but is also seen as a vote of confidence in the stability of this small self-proclaimed state.

“We’re going to make Berbera one of the world’s busiest ports, and become a gateway for the Horn of Africa,” said port director Ali Mohamed.

While exact details of the agreement with DP World have yet to be finalised, Somaliland says it will include a doubling of the port’s capacity.

“Berbera is as strategic as Djibouti.”

On the southern coast of the Gulf of Aden, Berbera offers an African base sitting at the entrance to the Red Sea and the gateway to the Suez canal, at the crossroads for cargo traffic between the Arabian Peninsula, Asia and Europe.

Somaliland itself is far from being a major international trading partner, but offers another route into neighbouring, landlocked Ethiopia, with a growing market of 96 million inhabitants.

Expanding the port could help bypass the congested port of Djibouti. An agreement signed in March with Ethiopia forecasts that almost a third of the country’s cargo traffic might be funnelled through Berbera.

Plans to boost the port have long been in the works: France’s Bollore Africa Logistics had hoped to win the contract, but Dubai clinched the deal amid wider investment and expanding influence in Somaliland by Gulf nations.

Kuwait has already financed the renovation of the airport in the capital Hargeisa, as well as construction of religious schools, while Emirates is one of the few airlines providing daily flights.

“The DP World bid was the best,” said port chief Mohamed, adding that Bollore may have “a second chance” as Berbera will undoubtedly need further development if the port is a success.

The most pressing challenge will be building a road able to handle the lorries carrying containers to Ethiopia.
For Somaliland, with a population of some four million, the port offers a chance of taking a bigger role in the region.

Without legal recognition Somaliland is in limbo. The government has a budget of $250 million (220 million euros) and its own currency, but cannot directly access the World Bank or IMF loans needed to develop infrastructure.

The government in Hargeisa hopes that the port might offer economic independence, even if political recognition remains a distant dream.

“We did all that was possible politically, and it did not work,” said Hanad Hashi, a councillor in Hargeisa. “We have to try the economic way. We need investors.”