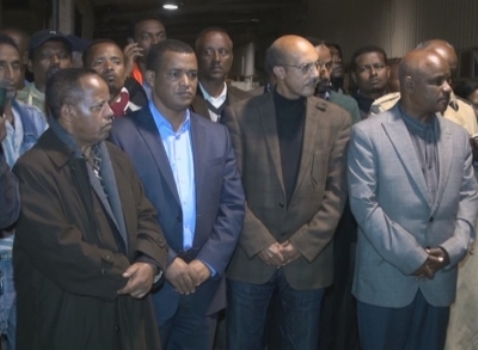 In a sad and grim homecoming, the bodies of 19 Ethiopian who died last week in Democratic Republic of Congo (DRC) while trying to cross into South Africa arrived in Addis Ababa, Bole International Airport last Saturday (June 25, 2016). High-level officials of the Ethiopian Ministry of Foreign Affairs, including State Minister Ambassador Taye Atske-Silassie and members of the bereaved families laid a wreath of flowers in honor of those who lost their precious lives.

Speaking at the wreath laying ceremony, State Minister of Foreign Affairs, Ambassador Taye said, “The Government of Ethiopia and its people are mourning over the death of these Ethiopian brothers and sisters. It’s a tragic and heartbreaking incident particularly to the bereaved families and the nation at large.” The State Minister expressed his deepest sympathy and condolences to the families and friends of the deceased.

Tricked by traffickers, these young Ethiopians have lost their precious lives, he added.  The State Minister further said, “This tragic incident should remind everyone that the masterminds of these vicious transnational crimes are willing to do just about anything to get away with their criminal activities, even if it means putting the lives of their victims into tragic end.” He maintained that the Government of Ethiopia, in partnership with INTERPOL, will do everything it can to bring those responsible to justice. He also related that trucks involved in transporting the migrants were detained by authorities in the DRC.

It was learnt that some 88 Ethiopians, who had been jailed for months in Tanzania and Zambia while trying to enter into South Africa, returned home recently.   According to the International Organization for Migration (IOM), more than 1,700 Ethiopians migrants returned home this year.