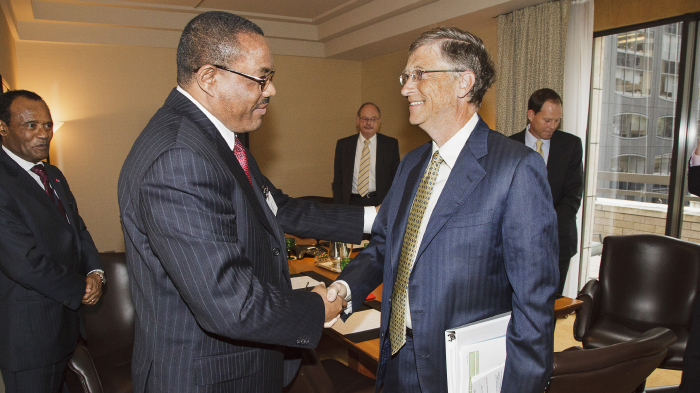 Dr Arkebe Oqubay, Special Advisor to the Prime Minister, who attended the meeting said, Bill Gates was briefed in detail on Ethiopia’s second Growth and Transformation Plan (GTP-II) and 2025 target.

The Premier and Gates discussed on new areas of cooperation which would be implemented in the coming ten years.

According to Dr Arkebe, the meeting created a good opportunity to listen advice from the founder of the philanthropic organization and the type of support his foundation would offer for the country.

The foundation has provided massive support for Ethiopia’s health and agriculture sectors in the first Growth and Transformation Plan (GTP), he said.

Foundation’s Deputy Director to Africa and Representative to Ethiopia and African Union, Haddis Tadesse, told reporters on the foundation’s interest to diversify its engagement in Ethiopia.

Haddis said climate change, rural development, agricultural commercialization, manufacturing, and pharmaceuticals are among the areas where the foundation would provide assistance in the future.

In Ethiopia, the foundation is implementing 150 development projects worth over 500 million US dollars.

Since beginning their great philanthropic mission in 1997, Bill and Melinda Gates have become a powerful catalyst for the improvement of lives in the world’s poorest countries.

Its focus has been on bridging the enormous health deficit between rich and poor countries and on fights it sees as vast, but ultimately winnable.

Among its goals are the eradication of malaria and polio, and controlling the spread of tuberculosis and HIV.