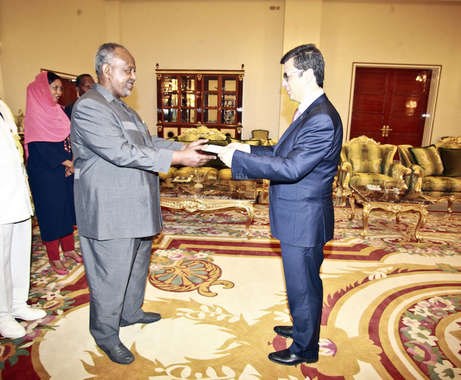 Djibouti (HAN) June 7.2016. Public Diplomacy & Regional Security News. By Amina Nazarli. Djibouti is one of the significant countries of the African continent, said Azerbaijani Ambassador to Ethiopia Elman Abdullayev, as he presented his credentials to President of Djibouti.

The ambassador hailed great potential for the development of bilateral relations between the Azerbaijan and Djibouti, which he described as one of the important countries of the African continent.

Pointing to the Armenian-Azerbaijani Nagorno-Karabakh conflict, the ambassador noted that the decisions and resolutions of the UN Security Council, the Organization of Islamic Cooperation, the European Parliament and other organizations condemning the Armenian aggression against Azerbaijan had not been implemented so far.

He said that Armenia still continues the occupation of Azerbaijani lands and as a result of the aggression more than one million Azerbaijanis became refugees and internally displaced persons.

President Guelleh, in turn, asked the ambassador to extend his greetings to President Aliyev.

He said his country attached great importance to developing relations with Azerbaijan, noting that the two countries support each other within all international organizations.

Eastern African country Djibouti always called for a peaceful settlement of the conflict between Armenia and Azerbaijan on the basis of respect for the principles of territorial integrity of states and inviolability of internationally recognized borders.