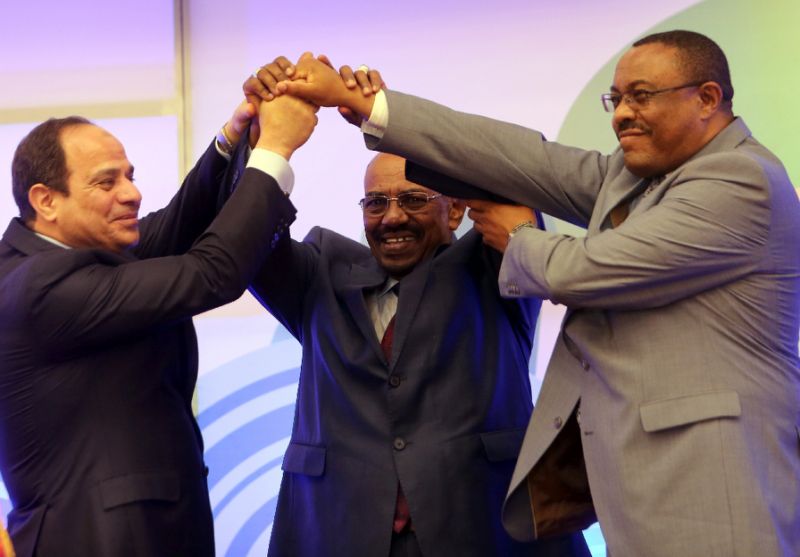 BY: Mohamed Saied. Netanyahu’s visit to a number of countries in the Nile River basin has stirred up curiosity in Egypt concerning the goals of this visit. In particular, some are questioning the timing, which coincides with the approaching conclusion of construction on the Grand Ethiopian Renaissance Dam, which precipitated a crisis between Cairo and Ethiopia. Egypt said the dam threatens to reduce Egypt’s historic share of the Nile River waters, which are estimated at 55.5 billion cubic meters (14.7 trillion gallons) annually.

Netanyahu said that Israel will support Addis Ababa to enable Ethiopia to benefit from itswater resources in agricultural development by extending advanced technology to Ethiopia. Water, Netanyahu said, is an area where “Israel has great expertise.” In a brief speech addressing the Ethiopian parliament July 7, he said, “Israel would like to participate with you as you develop your country and your society.”

Atiyah Isawi, a journalist specialized in African Affairs at Al-Ahram newspaper, told Al-Monitor, “Israel seeks to increase its presence on the African continent, to confront rising Iranian influence in East Africa.” He told Al-Monitor that African states seek to gain experience in the realms of security, counterterrorism, cultivating desert lands and the modern means of irrigation at which Tel Aviv excels, as well as investment in the agricultural and mining sectors, particularly in Ethiopia.

Concerning any hidden goals, Isawi said, “Israel is attempting to increase its influence by adopting a policy of ‘pulling in old parties’ against Egypt and Sudan in particular. Israel will use these good relations with African states to pressure Egypt when any [future] Israeli-Egyptian dispute of [sufficient gravity] merits it. This might influence Cairo’s interests in the continent, particularly the crisis over the dam.”

Saeed Okasha, an expert in Israeli affairs at Al-Ahram Center for Political and Strategic Studies, disagrees with this take. Okasha told Al-Monitor that Netanyahu’s visit will play a positive role should tensions grow between Egypt and Ethiopia, noting that Cairo and Tel Aviv face shared challenges, especially in the realm of countering terrorism and Hamas’ movements in the region.

During his visit, Netanyahu obtained promises from seven African heads of state that they will work to restore Israel’s observer status in the African Union, which he said holds “very great significance.” However, the Sudanese ambassador to the African Union (AU), Osman Nafie, in a statement to Anatolia News Agency, dismissed the possibility that Israel would obtain that status, due to the union’s “rejection of the ongoing Israeli occupation of Palestinian lands.” The AU rejected a previous Israeli request on the same matter in 1976, when African states considered Israel an aggressive and expansionistic state.

Mai Mahmoud, the secretary of the African Affairs Committee in the Egyptian House of Representatives, said Israel has exploited Egypt’s growing distance from African states since the era of former President Hosni Mubarak, to forge its own relationships with the states of the continent. He told Al-Monitor that Israel’s growing presence in the region will require greater caution and observation on Egypt’s part. However, he dismissed the possibility that Israel would exploit its ties with Ethiopia to pressure Egypt concerning the dam, out of deference to Egypt’s peace agreement with Israel.

“We wish to upgrade bilateral ties with Israel, and the principle of cooperation will be sustained between us in international forums, particularly given Tel Aviv’s support for our bid to become a temporary member of the [United Nations] Security Council,” he said July 7 on the sidelines of the signing ceremony for a Cooperation Agreement and Memorandum of Mutual Understanding in several areas with Israel.

Dore Gold, the general director of the Israeli Foreign Ministry, said on Israeli public radio July 8 that the growing ties between Israel and the African continent could help Israel in votes at the UN and its institutions. Israel faces international criticism concerning what are often described as “dark horizons” for the peace process with the Palestinians, which has been on hold since April 2014.

At the same time, Arab countries are seeking proposals that will affect Israel at the UN and other international organizations.

In a rapid development, Egyptian Foreign Minister Sameh Shoukry made an official visit to Israel July 10 — the first of its kind in more than nine years. During the visit, he held a joint press conference with Netanyahu and said the visit was part of Egyptian President Abdel Fattah al-Sisi’s vision for achieving a “warm peace” between the Israeli and Palestinian sides. The leaders also discussed the political aspects of the bilateral relationship as well as regional conditions, and Shoukry said that “the vision of a two-state solution is not far-fetched.”

Isawi expects that Ethiopia will seek to use Israel to pressure Egypt to pass or advance various concessions, particularly pertaining to the dam.

He said, “Whenever Israel feels that Egypt has begun to pressure it into making some concessions that it rejects in order to resume negotiations with Palestine, or if Egypt should threaten to sanction Israel in international forums over its hindrance of peace efforts in the region, or even for Israel taking some security measures in the Sinai Peninsula contrary to the terms of the peace accord, then Israel will seek to harm Egyptian interests in Africa” — especially once Israel builds stronger ties with states on the African continent.

Okasha disagreed with Isawi’s view, saying, “I don’t believe that Israel expects to use Ethiopia to pressure Egypt concerning the Palestinian cause,” noting that Cairo’s and Tel Aviv’s interests largely coincide there. But he said, “At the same time, I don’t trust Israel.”

Cairo is playing the role of mediator in an attempt to revive negotiations between the Israelis and the Palestinians. Accordingly, Shoukry visited Ramallah and met with the Palestinian leadership. He held protracted talks June 29 concerning Sisi’s initiative, which was welcomed by Tel Aviv.

Israel has already announced that it rejects the French initiative, which calls for establishing an international peace conference by the end of the year to relaunch Israeli-Palestinian negotiations under international supervision. The Palestinians welcomed the initiative, but Israel rejected the proposed talks on the grounds that they call for “the return to the 1967 borders, the withdrawal from the Golan Heights and a just solution to the refugees’ issue.”

Concerning possible dangers to Egyptian national security resulting from a growing Israeli presence on the continent, Maj. Gen. Kamal Amir, the head of the National Security and Defense Committee in the House of Representatives, told Al-Monitor, “We are tied to Israel by [shared] interests.”

He said, “It is their right to operate in Africa to break out of their international isolation, but Egypt must be alert in the event that this influences our own national security. The Israeli presence on the continent does not worry us. All the cards and all the eventualities are on the table before Egyptian decision-makers.”

He noted that Shoukry’s visit to Israel was a natural event that could be used to drive peace efforts in the Middle East.