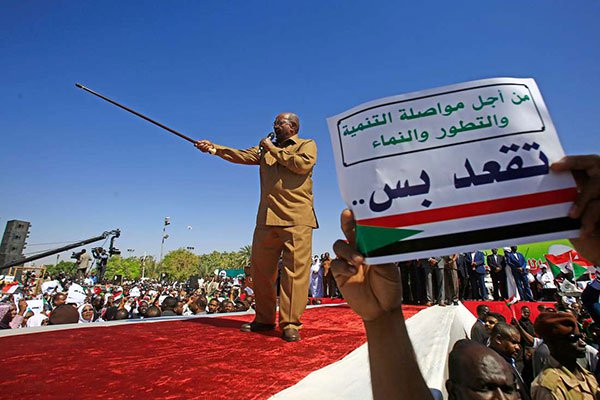 Sudanese President Omar al-Bashir has flexed his muscles, getting the military to declare that it will not allow his administration to collapse.

On January 30, Sudan’s Defence Minister Awad Ibn Auf and the Sudan Armed Forces Chief of General Staff Kamal Abdel-Marouf, held a meeting with army rank and file and announced that they would not allow the country to collapse or slip into the hands of people with unproven records and credibility.

“Those who are in the demonstrations are the same faces that have remained hostile to Sudan, distorting the country’s image among international organisations and supporting rebel movements that have been fighting the armed forces over the past years. We will not hand over the country to traitors and will not hesitate to confront them at any cost in order to preserve the security of the country and the safety of citizens,” said Gen Abdel-Marouf in a statement to the Sudan News Agency.

Gen Auf said that the military was aware of ‘‘the schemes to exploit the current economic conditions to incite the security forces to illegally take power,’’ adding that the disciplined forces will not be dragged into action that could ‘‘stain their status and history.’’

This comes in the wake of the fifth week of street demonstrations, with observers wondering whether they could grow into an uprising or fizzle out in the face of a mounting crackdown by security agencies and biting economic conditions.

The protests, led by the Sudanese Professionals Association, have attracted the support of opposition parties and the civil society.

The inner circle of President al-Bashir’s ruling National Congress Party is concerned that the protest organisers are trying to recreate the Arab Spring that swept away the leaders of Tunisia, Egypt and Libya.

What started as protests in Khartoum over the high prices of fuel and bread following the removal of government subsidies, has now attracted opposition parties who are calling for sustained efforts to force the collapse the regime.

A group of 22 opposition and civil society groups had earlier in the year called for al-Bashir to step down or they would support a revolution.

Sudan is one of the few African countries that saw post-Independence popular uprisings that ousted military regimes in 1964 and 1985.

The question now is whether President al-Bashir is ready to use the army to crush the protests or is merely testing the waters. Some analysts say that al-Bashir — who came to power in 1989 via a coup — unlike his predecessors, has been restructuring the army throughout the past 30 years and filling the top ranks with regime loyalists.

Second, he has been playing out his foreign policy cleverly where he remains friends with Egypt, Iran, Turkey and Qatar— who provide military and financial aid.

But Dr Luka Kuol Abiong, a South Sudanese academic and an expert on Sudan, told The EastAfrican in an interview that the difference between the 1964 and 1985 scenarios and today is that the current protests seem resilient in terms of time, intensity and have attracted the youth and women.

“Unlike previous uprisings, the current protests are led by the new forces of youth and middle-class professionals who are informed, connected and equipped with enabling social media technology that makes them difficult for the government to contain easily,” he said.

Dr Abiong, a professor at the Africa Centre for Strategic Studies at the US National Defence University, said that the 30 years that President al-Bashir has politicised and Islamised the army had subjected citizens to even more suffering rather than uplifting their living standards.

For instance, the Islamic groups and scholars, he said, have come out strongly against the government’s mismanagement of the economy, and gradually the protests if they continue are likely to erode the cohesion within the security institutions because it is getting into their households through their children and spouses.

Dr Abiong says that President al-Bashir has three options; initiate reforms and genuinely negotiate with the opposition on the best way forward for the country.

Secondly if things gets worse, he could hand over power one of the neutral military who could be acceptable to the protesters and who could also ensure his safety.

Thirdly, he could continue to resist with the hope of wearing out the protesters, declare a state of emergency and violently suppress the uprising. But he says this could be counterproductive because the scenario could descend into a protracted and fragmented conflict similar to that of Syria and Libya.

“Given the reliance and the difference shape the protest are taking including using plays and poems to pass messages against the government, it appears that uprising seems to gain more traction the more the government uses violence to suppress it,” said Dr Abiong.