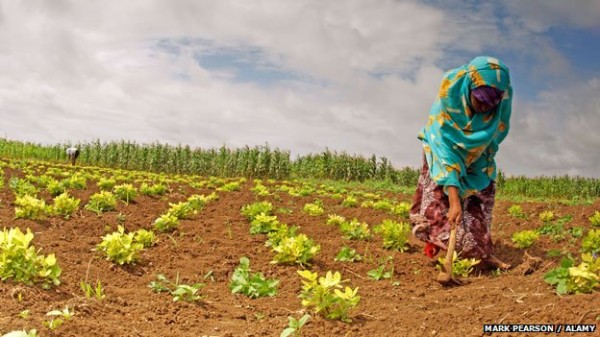 Banana farmers in southern Somalia’s Afgoye district have suffered huge losses due to the damage caused to banana plantations by the drought earlier this year.

The river Shabelle in this part of Lower Shabelle region dried up in March after the faisure of the rains, causing the numerous farms dependent on river irrigation to shrivel up.

Afgoye is one of the richest agricultural districts in Somalia.

The chairman of the local banana farmers’ cooperative, Hassan Barkhadle Wardone, told Radio Ergo that about 300 plantations had been destroyed in Afgoye and the surrounding villages of Jambaluul, Awdheegle and Arimoog.

A number of local farmers replanted in May and were irrigating the new trees hoping to get an early fruit yield after five months. It usually takes up to 11 months for a banana tree to produce fruits.

Mire Warsame told Radio Ergo that he had spent $29,000 on replanting 30 of his 70 hectare land with banana trees. The entire plantation dried up in the drought.

Osman Maalim Fanah, a banana trader in Afgoye, told Radio Ergo that bananas were now scarce and prices had shot up.  A sack of bananas priced at 400,000 shillings ($18) four months ago was now selling for 1.2 m shillings ($54.5).

He said the transportation of bananas to other regions for sale had ceased and a dozen stores that used to sell bananas had closed.

Residents wishing to buy a single banana to eat would pay today what it used to cost to buy 15 pieces of the fruit.

Bananas form a significant part of the diet for Somali families.