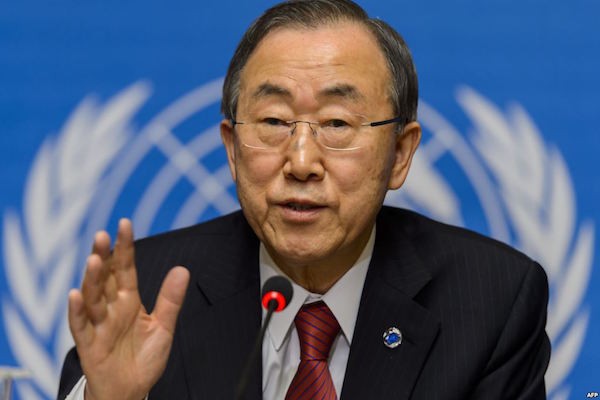 In a telephone conversation with President Uhuru Kenyatta on Wednesday, the UN chief asked Kenya to use an agreement signed with Somalia and the United Nations High Commissioner for Refugees (UNHCR) to return refugees safely to their countries of origin.

“The Secretary-General urged President Kenyatta to use the Tripartite Agreement, signed in November 2013 with the Federal Government of Somalia and the UN Refugee Agency (UNHCR), as a basis for the voluntary return of Somali refugees in safety and dignity,” a statement from Ban’s spokesman said Wednesday evening.

“He expressed UN’s support to Kenya, including the proposal by the High Commissioner for Refugees, Filippo Grandi, that a high-level bilateral review on the refugee situation in Kenya be conducted by the government of Kenya and UNHCR,” said the statement.

It is the first direct approach from the UN boss in a bid to stop the closure of the refugee camp considered the world’s largest, hosting about 350,000 Somali refugees.

It also precedes an imminent visit by UN Security Council members expected to tour Kenya, Somalia and Egypt from Thursday. The exact itinerary for the trip had not been released by Wednesday.

“The reasons the Security Council is coming here is because they are preparing to discuss renewal of the mandate of Amisom and so they will come to check the status of the situation on the ground.

“They will travel to Somalia before returning here in the evening,” she said.

Despite opposition from relief and human rights groups, Kenya announced last week that it would starting closing the Dadaab camp and eventually repatriate all refugees, arguing the camp had become a haven for terror merchants, smugglers and drug traffickers.

The government says it receives little funding to help host refugees and has been frustrated at the way the agreement has dragged on.

It argues the camp has caused serious environmental degradation in Garissa County, where it is situated.

Mr Ban’s initiative indicates that the UN is determined to avoid what it calls exposing refugees to danger.

Somalia is not yet safe, the UN argues.

Instead, the UN chief is proposing that his deputy in charge of refugees travel to Nairobi later this month to discuss the issue together with Somalia.