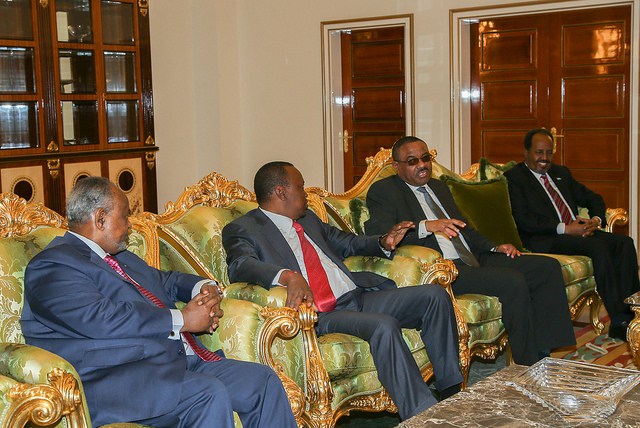 Djibouti (HAN) March 1, 2016 –Opinion By:Hassan MK. Public Diplomacy and Regional Stability Initiatives News. As its name indicates, Intergovernmental Authority on Development (IGAD) is a Guide for development in the region. However, in its revamped and ever-expanding mandate, IGAD has increasingly embarked upon various projects and initiatives in its region and discreetly cut its mediation and peace and security deals teeth on Somalia and Sudan.

This article is written to cast some light on what kind of IGAD Somalia wants and the Somalia IGAD wants to shape. As my usual writings, this piece contributes to the debate towards the regional integration in the IGAD region.

Somalia has virtually become an IGAD responsibility. This is no wonder as IGAD is Somalia’s premier resort. Without it, Somalia would have been no more. IGAD is seriously trying to shape the political environment of Somalia; a very imperfect setting. IGAD stayed on for over two decades trying to help Somalia move out of its chronic crisis and will hopefully stay on until peace and security return to Somalia. Indeed it is a good thing that IGAD is there for Somalia.

The consensus of IGAD is that Somalia needs more economic, military and political backing to deepen its peace and stability. This forceful role of the regional bloc has brought into sharp focus the role of IGAD in Somalia. This is a further testament to IGAD’s relevance in its member states.

After months of political deadlock, Somalia leadership finally agreed on electoral model for the 2016 elections. The model is not completely suitable but nothing more suitable is available to the current proper Somalia.  It was selected as the only viable option for power-sharing and selecting the next crop of representatives in the Lower House. This is acceptable, willy-nilly, when Somali political class have collectively failed to offer viable alternatives.

For fear of unnecessarily continued political stagnation in Somalia, at the 55th extraordinary session of its foreign ministers in Addis Ababa, in January 2016, IGAD issued a strongly worded Communique which proved how much IGAD is going to act as the last bastion of restoring Somalia statehood.

No doubt that IGAD has the mandate and privilege to conduct political and security audit in its member of state, Somalia, but the question is: Is IGAD driven by a genuine desire to solve the problems in Somalia and help the people of Somalia? Or does IGAD have the vision and the political clout to fulfill the resolve to shape the Somalia it wants?

In support of Somali Federal Government’s decision on the electoral model in 2016, Ambassadors and representatives from the International Community paid visit to different parts of Somalia to press the implementation of the decision into service and give guarantees of a political Map that will lead to universal suffrage by 2020.

The challenge now is implementation of the model which is vigorously opposed by Puntland, albeit the recently concluded Ministerial High-Level Partnership Forum, in Istanbul, not only noted the absence of Puntland from the Forum but also urged the Federal Government to make every effort to ensure that Puntland is fully on board for inclusive electoral process in 2016.  The Somali leadership promise to leave no stone unturned to get Puntland on board.

Today Somalia is largely dependent for its authority on its international partners in general and the AMISOM and IGAD in particular. Therefore, in order for IGAD to deliver, in a positive manner, on its commitments to Somalia, it should keep in mind that Somalia wants the IGAD with the following five characteristics:

One thing for certain is that all self- respecting Somalis note with appreciation the long history of IGAD’s engagement in the stability of Somalia especially its efforts to recover the country from the lawlessness that took away the nations’ dignity and self-respect.

Finally, who suspects Somalis’ real aspiration to have united, peaceful and democratic Somalia? The International Community in general and IGAD in particular really need to trust Somalis and invest in their institutions rather than overlooking many dishonest motives that either outsource the state functions or directly get involved in them. This is the only way to reduce corruption and enhance capacity for credible statecraft in Somalia.