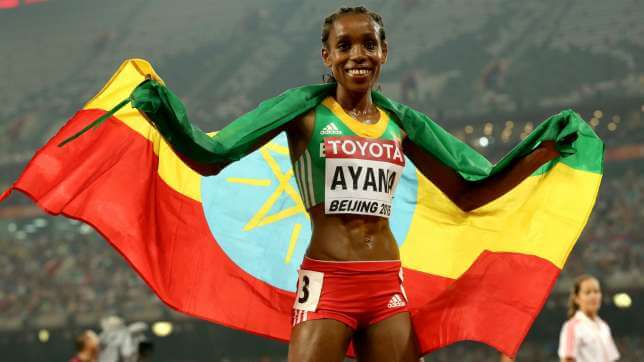 Ethiopia’s Almaz Ayana will seek to become just the second woman in history to win Olympic gold in both the 5000m and 10,000m at the Rio 2016 Olympic Games next month.

The 24-year-old was announced for both events by the Ethiopian Athletics Federation and appears to hold a strong chace of emulating the feat first accomplished by countrywoman Tirunesh Dibaba in 2008. Ayana tops the world lists at both distances this year, having run 14:12.59 for 5000m at the IAAF Diamond League meeting in Rome and 30:07.00 for 10,000m in Hengelo last month.

Reigning Olympic 10,000m champion Tirunesh Dibaba is slated to compete solely over that distance in Rio, though is also listed as a reserve for the 5,000m.  The 30-year-old will be seeking her fourth Olympic gold medal in Rio, though has competed sparingly so far this year. In her only outing over 5000m, Dibaba clocked 14:41.73 at a small meeting in Kortrijk, Belgium last weekend, and in her sole 10,000m race she finished third in the Ethiopian trial race in Hengelo in 30:28.53.

Genzebe Dibaba will narrow her focus and compete over 1500m, the event at which she holds the world record at 3:50.07. The reigning world champion clocked 3:59.83 in her sole outing at that distance in Barcelona last weekend.

Dejen Gebremeskel, the silver medallist over 5000m at the London 2012 Olympic Games, will bid to go one better over the same distance in Rio and will be joined by Muktar Edris and Hagos Gebrhiwet.

Another looking to go one better in Rio will be Sofia Assefa, the 3000m steeplechase silver medallist at the 2012 Games, though the 28-year-old has a best of just 9:18.16 this year.

Former world champion Mohammed Aman is the sole Ethiopian entrant in the men’s 800m and will be looking to win his first Olympic medal, having finished sixth in the 800m final four years ago.

The men’s marathon team is headed Tesfaye Abera, a winner in both Dubai and Hamburg this year. Lemi Berhanu, a runner-up in Dubai this year, will join him on the team along with Feyisa Lelisa, a winner at the Tokyo Marathon earlier this year.

ETHIOPIAN TEAM FOR RIO (INCLUDING RESERVES)