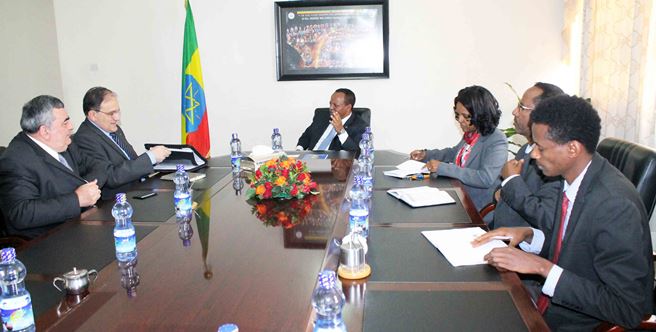 ADDIS ABABA (HAN) May 17.2016. Public Diplomacy & Regional Security News. Ambassador Armen Melkonian, Ambassador of Armenia to Ethiopia (Cairo-Resident) during his meeting with State Minister of Foreign Affairs, Ambassador Taye Atske-Selassie this morning (May 17, 2016) announced that his country is set to open an embassy in Addis Ababa Ethiopia.   On the occasion, Ambassador Armen Melkonian expressed his country’s decision to open an embassy in Addis Ababa, would bring Armenia closer to the country in particular and the African continent in general. The opening of the embassy will strengthen the age old relationships between the two countries in cultural ties, education trade, information technology, investment and other sort of bilateral co-operations.

The Ambassador also said the opening of the embassy in Addis Ababa could be significant for Armenia to strengthen the antique and historical relationships that had existed between the two countries and further deepen the bilateral relations. He related Armenia’s interest to work with Ethiopia in Investment, Agriculture, Food processing, Machinery and Jewelry in a bid to enhance the trade ties between the two countries. Ambassador Armen said Armenia would also be keen to establish political consultation platforms with Ethiopia and prioritize the promotion of inter cultural exchange. Furthermore, Armenia looks forward to establishing and promoting parliamentary friendships between the two countries, he added. State Minister of Foreign Affairs, Ambassador Taye Atske-Selassie also mentioned that the countries have enjoyed historical people-to-people relations. The State Minister added Ethiopia would appreciate and consider Armenia’s quest to open an embassy in Addis Ababa, which he said was instrumental to expand the existing relationships between the two countries.