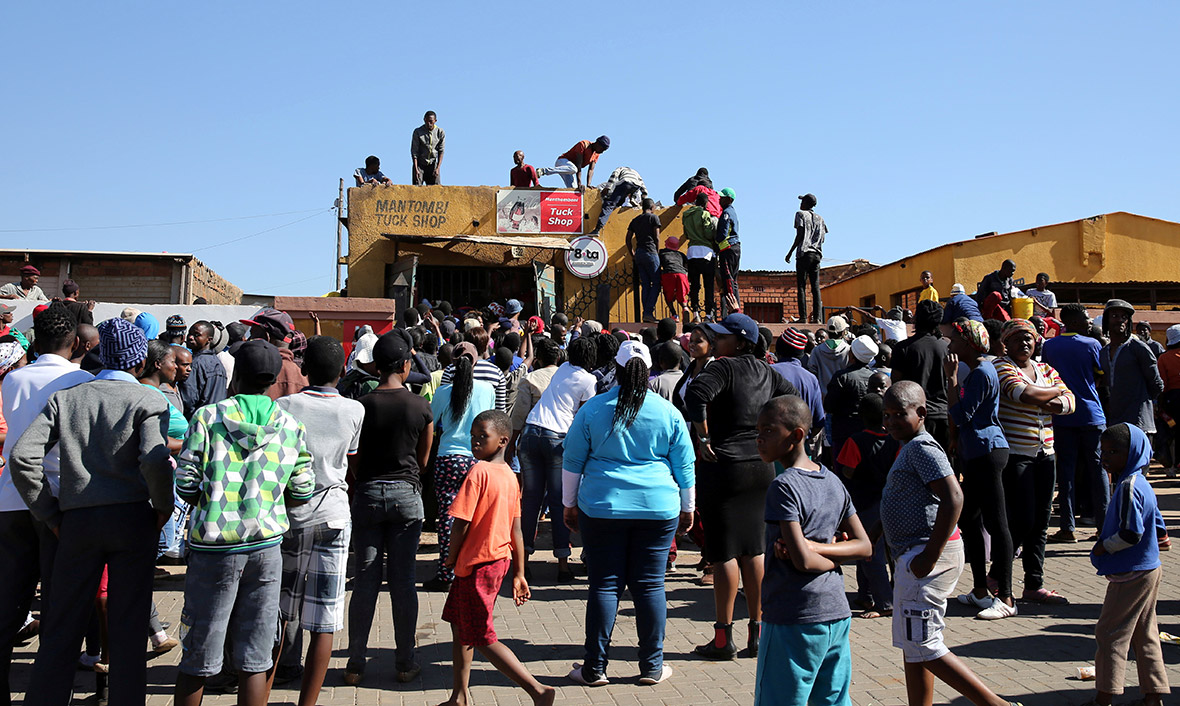 Even some members of the South African police service are seen here stealing from poor foreign spaza shop owners they supposed to protect. Unimaginable chaos, brazen looting and extreme anarchy just few kilometres from the presidential palace known as the union buildings. State security Minister David Mahlobo said on Thursday that the violence Pretoria faced has reached a new level involving gangs, youths on drugs and opportunistic members of the community with a criminal agenda.

“Although trouble had persisted overnight, law enforcement had restored a semblance of calm to the capital.” The Minister added as Pretoria braced itself for a third day of violent protests. However, the Minister didn’t update anxious foreign nationals on the fate of their counterparts that are remain trapped in the affected areas and left to the mercy of xenophobic and extremely cruel criminal gangs. Several hundred Ethiopians, Nigerians, Zimbabweans and other African nationals are believed to have been stranded inside the lawless and dangerous townships where looters run amok without any fear of the police.

Worst affected areas where looting reached fever pitch are Mamelodi, Atteridgeville, Mabopane, Soshanguve, Hammanskraal and Ga Rankuwa. For now the death toll stands at five and we are unable to establish whether Ethiopians or other African nationals were among the dead.

“ya gents please…please…anyone who can assist…please…we need urgent backup at central city…we are even out of rounds…these people are attacking us…please,” a South African police officer was heard pleading in two radio  transmissions obtained by News24 journalists on Thursday morning..

Furthermore, a police source with knowledge of the operation, who could not be named as he is not authorised to speak to the media told news24 that officers are struggling to quell the criminality which utterly embarrassed the authorities.

“There are simply not enough police officers and we are overwhelmed. With the way we are engaging these people while trying to protect property and disperse them, we are running out of rubber bullets. A lot of people (police officers) haven’t been issued with rubber rounds.” The unnamed officer said.

Currently, (on Thursday) the looting frenzy that was ignited on Monday night after the announcement of ANC stalwart Toko Didiza  as mayoral candidate for Pretoria, has moved to Mabopane central city shopping centre. The area was hit by ugly violent protests and looting overnight (Wednesday night).

Meanwhile, Gauteng Premier David Makhura says looting is of great concern to him, the police are acting firmly. “We can assure people of the province that ANC members are helping to stop looting incidents.” And as events shifted to theft, the Premier conveyed his regrets to those who have lost their property to looters.

As the dust settles, more news and updates on the fate of Ethiopian refugees and other Africans trapped inside affected areas to follow shortly….