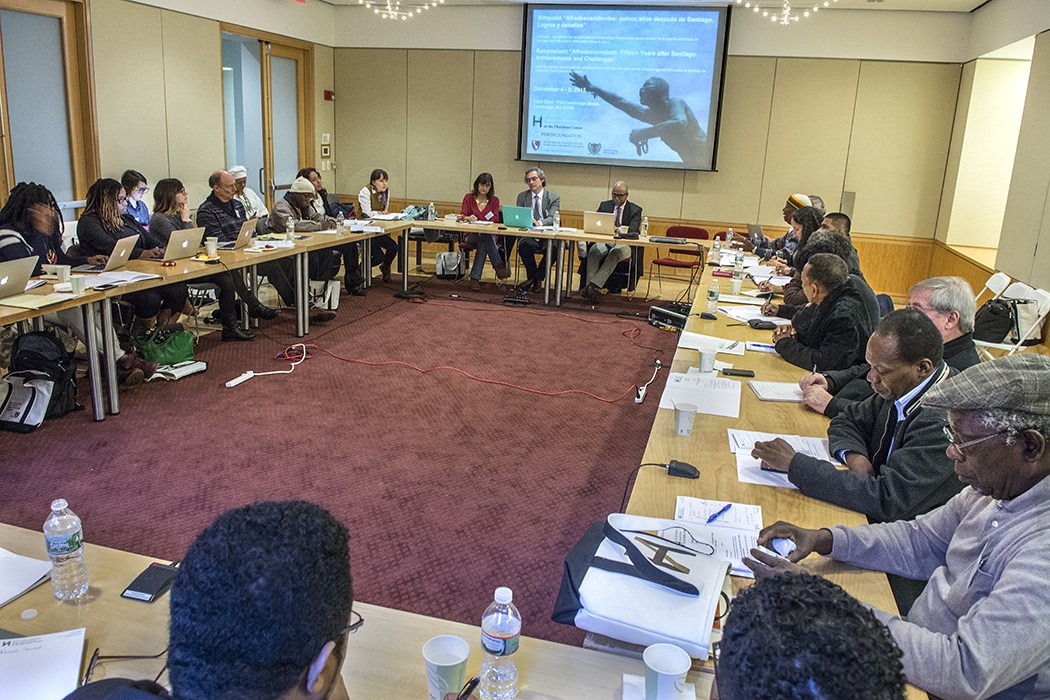 Activists from twelve Latin American countries attended the Harvard Symposium together with representatives from the Ford Foundation, the Inter-American Development Bank, the World Bank, the United Nations Committee for the Elimination of Racial Discrimination and the Organization of American States.

In the short span since its inception, the Latin American Afrodescendant movement has had an extraordinary impact on the formulation of anti-racism policy in Latin America and beyond. Its origins date back to the December, 2000, Latin American Regional Conference Against Racism in Santiago de Chile, convened to articulate the region’s agenda in advance of the World Conference against Racism to be held in Durban, South Africa the following year.

It was at the Santiago Conference that the category “Afrodescendant” was coined and obtained regional endorsement. The term identified people born in Latin America whose ethnic ancestors were Africans, and who face economic, political and cultural exclusion and inequality. This new category allowed an international movement to emerge and demand recognition and protection of collective economic, political and cultural rights.

In response, Latin American governments and international institutions have introduced a remarkable number of anti-racist policies that acknowledge Afrodescendants and attempt to address their specific needs. To this end, almost every country in the region has adopted significant constitutional reforms. Some countries – like Brazil, Ecuador, Uruguay, Peru and Colombia – have gone further, taking steps to put these principles in practice by creating affirmative action policies, specialized anti-racism institutions and school curricula.

The recent Harvard Symposium took advantage of the 15th anniversary of the Santiago Conference to reflect on the achievements, lessons and challenges of the Afrodescendant movement. In terms of the former, participants took stock of the organizational, institutional and normative transformations that have taken place since the year 2000.

Referring to challenges, the conversation focused on the existence of ideological disagreements between the so called “left-” and “right-wing” branches of the movement, especially on the issue of building alliances with governments, intergovernmental entities and funding agencies. Participants also dedicated time to exploring how governments and human rights agencies are addressing the Afrodescendants’ continued situation of social inequality. This included a discussion of the current funding allocation practices of multilateral and donor agencies.

Concerns were raised that the lack of proper and effective access to financial resources is debilitating the movement. Finally, the Symposium facilitated a fertile dialogue on movement leadership models. In particular, it is worth highlighting the presentation made by the delegation from Cuba, a newcomer to the movement, recounting a fascinating experience of grassroots social mobilization and leadership in the absence of support from domestic and international public and private agencies.

The Harvard Symposium represented the first meeting of its kind in that Afrodescendant leaders and policy makers convened to engage in a well-rounded and focused reflection on the movement itself. By facilitating this kind of dialogue between a wide-range of actors, this meeting opened up a conversation grounded in real life problems.

This conversation will continue next year at a second meeting, to be held at the University of Cartagena de Indias in Colombia. The Cartagena meeting will invite activists and scholars to explore policy strategies that respond to some of the challenges identified at the Harvard Symposium. Source: africasacountry