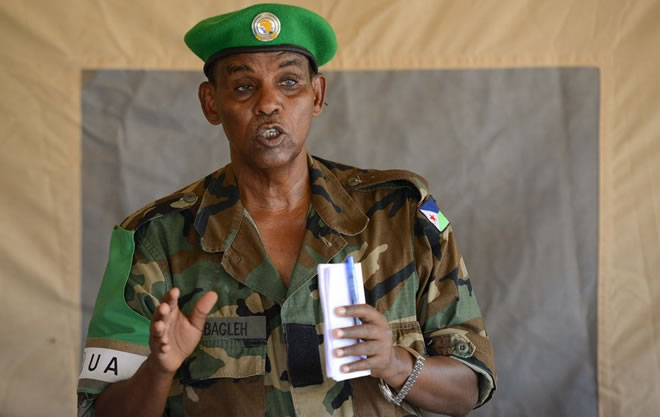 The Force Commander met with the Special Representative of the African Union Commission Chairperson (SRCC) for Somalia and Head of AMISOM Ambassador Francisco Caetano Madeira, who noted that his arrival comes at a critical time for the Mission.

“The General is coming at a moment when we have just revised the AMISOM Concept of Operations for 2016 and I am glad that he did fully participate in the deliberations that led to the adoption of the same. Now that the Concept of Operations has entered into force, he is the Commander-In-Chief when it comes to its implementation,” Ambassador Madeira said.

He highlighted the forthcoming electoral process in Somalia as one of the key priority areas, to which the new Force Commander will have to pay particular attention and provide the required leadership to ensure that all stages of the electoral process take place in a conducive and secure environment.

Lt. General Soubagleh has previous experience working with the African Union Mission in Somalia, having served as AMISOM Chief of Defence Staff between 2012 and 2013.

Before his appointment as Force Commander, he regularly participated in meetings of the Joint Military Operations Coordination Committee (MOCC) of AMISOM, on behalf of Djibouti.

Ambassador Madeira wished Lt. General Soubagleh success in his new mission at the service of our continent.