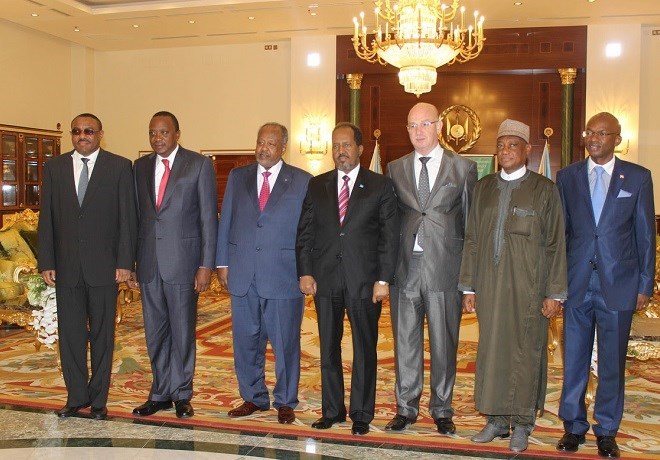 Mogadishu (HAN) February 29, 2016 – Public Diplomacy and Regional Stability Initiatives News. Presidents from countries that contribute troops to the African Union Mission in Somalia (AMISOM) have agreed at the Djubouti summit to bolster operations in Somalia.

According to a statement released by AMISOM, the aim of the Djibouti summit was to seek ways to bolster troop operations and enhance the strength of the Somali National Army.

“The Summit was attended by Presidents of Somalia, Kenya, Djibouti, and the Ethiopian PM as well as Uganda, Burundi and Nigeria Defence Ministers,” a statement from AMISOM noted.

The summit was convened yesterday a day after a ministerial meeting of troop contributing countries to the African Union Mission in Somalia (AMISOM) in Djibouti.

Uganda was represented by Gen. Jeje Odongo, the State Minister for defence.

“Discussions are aimed at reviewing and revamping the mission’s operations in Somalia, working in-conjunction with the Federal Government of Somalia and Somali National Security Forces,” the AMISOM statement added.

AMISOM urged leaders to consider recommendations for revitalised operations in Somalia, which were agreed upon by defence ministers from states that contribute troops.

“Today I travelled to Djibouti to attend the Heads of State Summit of Troop Contributing Countries to AMISOM,” President Uhuru Kenyatta stated on his official twitter-page.

The host of the summit, Ismael Omar Guelleh, the President of Djibouti, also stated on his official twitter page that the Prime Minister of Ethiopia, Hailemariam Dasalegn had yesterday joined Uhuru for the summit.

“Despite the progress made, a lot more needs to be done for sustained peace in Somalia. We must work together to eliminate Al-Shabaab from Somalia and from the region. The political will is evident from this meeting and we need to double our efforts for total eradication of Al-Shabaab,” stated Djibouti Defence Minister Hassan Dharar Hufane in his address to the ministerial meeting.

The AU Commissioner for Peace and Security Smail Chergui said aggressive operations against Al-Shabaab militants must be fast tracked.

“We have to make recommendations to the Heads of State that will ensure adequate resources for the mission to execute its mandate. Any decrease of resources will impact on the gains realized so far. As discussions continue towards addressing logistical needs and reinforcement of the Somali National Army, the operations must continue,” he said.

Uganda was the first Africa country to contribute troops to Somalia, and has the largest number of troops in the war-torn country