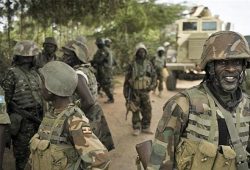 MOGADISHU (HAN) April 17. 2016. Public Diplomacy & Regional Security News. The African Union Mission in Somalia (AMISOM) has learned, with great concern, that an incident in which civilian lives were lost has taken place in Bula Marer, Lower Shabelle Region, where AMISOM troops are involved in the fight against Al-Shabaab militants.

Preliminary reports indicate that earlier today, in an operation to neutralize suspected Al-Shabaab insurgents in the area, forces set up a roadblock. A speeding vehicle approached the roadblock and failed to adhere to repeated warnings to stop. Assuming the car to be a Vehicle Borne Improvised Explosive Device (VBIED), the troops opened fire resulting in the death of four occupants of the vehicle.

AMISOM profoundly regrets the loss of Civilian lives that occurred during the operation and presents its heartfelt condolences to the bereaved families.

In the fulfilment of their obligations in the battle front, AMISOM personnel are bound by the International Humanitarian Law as well as by the African Union Peace Support Operations Code of Conduct. In line with the AMISOM Rules of Engagement (RoE) which are in consonance with International Humanitarian Law (IHL), AMISOM troops are obligated to exercise maximum restraint, strictly respect human rights and avoid civilian casualties even in situations of  imminent attack.

The matter has been referred to the appropriate instances of the AU Commission.

In accordance with AMISOM’s standard operating procedures in such situations, a board of inquiry will immediately be set up and, working very closely with the Federal Government of Somalia and South West Regional Administration, it will seek to clarify, in the minute detail, the exact circumstances in which the incident occurred and propose the action to be taken.

CCTARC, a body set up on recommendation by the United Nations Security Council to track and analyse situations and circumstances in which civilian casualties have occurred in AMISOM operations and make the required amends, will also be involved.