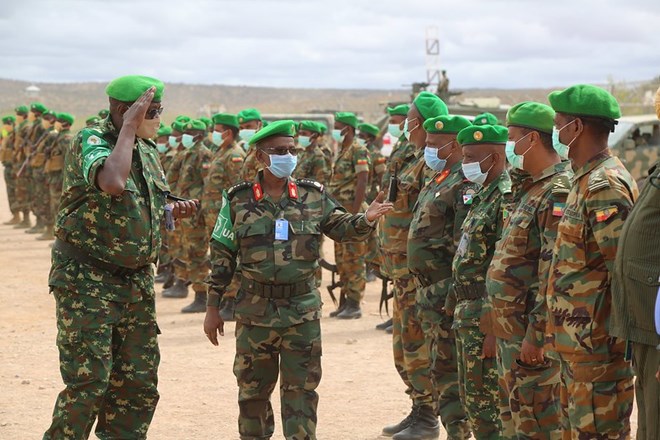 On landing at Ugas Khalif airport in Beletweyne city on Tuesday, which is protected by AMISOM forces, Lt. Gen. Ndegeya and his delegation were received by Sector 4 Commander Col. Abdirahman Riyale Hared and other AMISOM officials. He immediately inspected a guard of honour mounted by sector 4 forces and later held a closed-door meeting with the sector commander and his top officers.

The Force Commander Lt. Gen. Ndegeya also later met with Hiiran region governor Ali Jeyte Osman who briefed him about the situation in the region and how close the Somalia government forces and AMISOM forces work together in maintaining peace and security in the region.

Lt. Gen. Ndegeya commended AMISOM troops in sector 4 for pushing out Al-Shabaab terrorists from swathes of land under their control and opening main supply routes that connect the major towns in the region. He also commended them for saving lives during recent floods that engulfed Beletweyne after river Shabelle burst its banks.

“You have managed to keep the enemy at bay and this has helped the people of HirShabelle State and in particular those living in Hiraan region and more precisely Beletweyne get a reprieve and an opportunity to peacefully go about by their business and farm their land to continue feeding the rest of Somalia,” Lt. Gen. Ndegeya said.

“You displayed courage, humility and kindness in going out of your way to transport women and children and the elderly who could not swim from the affected areas into high grounds to save their lives. You also provided non-food items like tents, dry rations and medical support to the people. I also know you have done an excellent job   in the sector to secure the main supply routes from Beletweyne to Buulo Burde, this and many other supply routes have enabled these areas to develop and support to reach the public,” He added.

AMISOM Sector 4 Commander, Colonel Abdirahman Riyale Hared thanked the Force Commander for his visit and said the troops morale is high to deliver on their mandate.

“Today, we had a visit from our Force Commander, Lieutenant General Diomede who came for an assessment visit and introduction of sector 4 headquarters. He wanted to understand what sector 4 troops are doing, we have briefed him about the general situation politically and operational wise,” said Col. Riyale.

This was Lt. Gen. Ndegeya’s maiden visit to Beletweyne and Sector 4 since taking over the helm at AMISOM earlier this month. AMISOM has 5 sectors in Somalia served by Ugandan, Kenyan, Ethiopian, Burundian and Djiboutian forces.