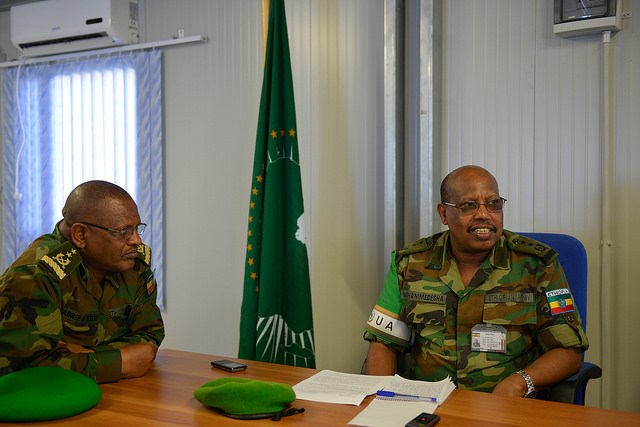 Maj. Gen. Zeyinu, who was in charge of Operations and Planning, officially handed over office to Maj. Gen. Abreha Tesfay, who takes over from him.

In his remarks, Maj. Gen. Zeyinu said he was proud to have served under AMISOM, adding he had acquired invaluable experience in counter-insurgency operations.

“I am happy to have participated in this Mission. It is an African Mission and I have acquired immense experience working alongside my African brothers. We have shared experiences and we know our strength as Africans and what is needed to develop and manage similar missions,” he remarked.

The outgoing Deputy Force Commander, thanked AMISOM staff for their support. He urged them to work accord similar support to his successor.

The incoming Deputy Force Commander Maj. Gen. Tesfay paid tribute to his predecessor for his role in the military operations that greatly contributed to weakening of Al-Shabaab.

He noted that Al-Shabaab remains a threat and emphasized the need to completely degrade the terror group.

“As a new comer, I need your usual support in accomplishing these tasks. We need to work hand in hand towards our common goal, which is to ensure peace and stability in Somalia by destroying Al-Shabaab,” Maj. Gen. Tesfay said.

In her remarks during the ceremony, the Deputy Special Representative of the Chairperson of the African Union Commission for Somalia (DSRCC), Hon. Lydia Wanyoto praised Maj. Gen. Zeyinu for his contribution in Somalia’s stabilization process.

“We would like to recognize the contribution you have made to the African Union as the Deputy Force Commander Operations and Plans,” she added.

“On behalf of the entire AMISOM fraternity and on my own behalf, may I take this opportunity to congratulate you for the good service you rendered to AMISOM,” Lt. Gen. Soubagleh said.