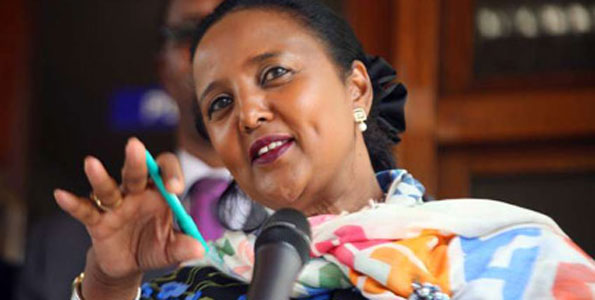 By Charles Onyango-Obbo. President Uhuru Kenyatta revealed that Kenya had thrown in the name of Foreign Affairs Cabinet Secretary Amina Mohamed to be the next head of the African Union (AU) Commission.

AU leaders meeting in their July summit in Kigali, Rwanda, failed to choose a new chairperson, who functions as the CEO of the continental body, to replace South Africa’s Nkosazana Dlamini-Zuma, who decided to step down after a very un-African one term.

None of the three candidates who had been nominated to take her place could muster the necessary two-thirds of the vote from the continent’s leaders. The AU leaders will give it another shot at the next summit in January in Addis Ababa.

Ms Mohamed’s name emerged early after the Kigali flop as a suitable candidate. But is her nomination about getting her the job or something bigger?

Consider, for one, that her deputy, Erastus Mwencha, is a Kenyan. Before moving to Addis Ababa, Mwencha was former secretary-general of the Common Market for Eastern and Southern Africa (Comesa), headquartered in Lusaka, Zambia.

It would be truly historic then as it would require the vote of Comesa countries too, to get them to vote for a Kenyan as chief at AU and also get Francophone Africa on board.

But there is an even bigger complication. A vote for Mohamed would mean she would have been elected at a time when another East African, Rwanda’s President Paul Kagame, is also chairperson of the continental body.

Would the rest of Africa indulge us so much?

Also, Nairobi would have an interest in protecting the Mohamed brand and ensuring that it is not damaged by a loss. So, either despite everything else, President Kenyatta knows something that gives him comfort in the likelihood of a Mohamed victory or the proposal is a fake pass to throw opponents off their game. An outsider can only make informed speculation.

As The EastAfrican reported at the weekend, Kagame has picked a “dream team” to help him draw up a plan for the reform of the AU. The reforms, among other things, are supposed to make the AU, which is donor-dependent on funding, more self-reliant.

The EastAfrican reported that Lopes, who is leaving his Uneca post early, might be tapped as a compromise candidate. In August, there was also speculation that Kaberuka was under pressure to step up to the plate and “do for the AU what he did for the AfDB”. He flatly refused.

Kagame’s “dream team” reflects a growing tendency in Africa that the AU must be “corporatised” and run by technocrats, which would make it easier for the body, which is technically bankrupt, to raise money. A more corporatised AU would function like the World Bank and the AfDB.

Now, one of the signature actions of Kaberuka at AfDB was that he decentralised the bank, breaking it into East, West, South, and North Africa regional operations.

It can be expected that some of that thinking will come through the “dream team’s” work. Ms Mohamed’s candidature helps highlight the need to decentralise the AU.

For Kenya, post-ICC, the focus is Somalia and violent extremism. Violent extremism also exercises the Maghreb, and North and West Africa. But it is not a big issue for southern Africa.

An overly centralised AU is limiting its ability to be responsive to regional crises.

One could be wrong, but in practical terms, Mohamed’s candidacy presents the AU with two choices: pick her and accept a very East African-flavoured AU, or don’t and back the Kagame reforms.

In the end, they are one and the same thing.