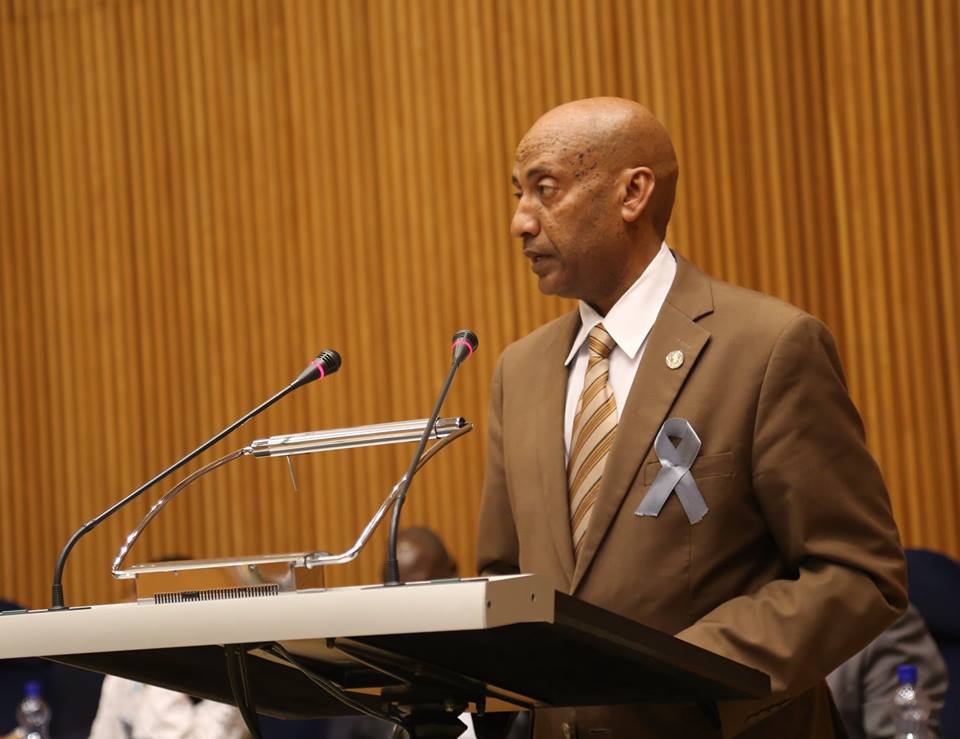 Remarks by  Ambassador Wahide Belay: Permanent Representative of the Federal Democratic Republic of Ethiopia to the African Union and UNECA at the 21st Commemoration of the Rwandan Genocide April, 2015, Addis Ababa.

Excellency Dr. Nkosazana Dlamini Zuma, the Chairperson of the African Union Commission,
Distinguished Ambassadors,
Invited Guests;
Ladies and Gentlemen;
Today we have gathered to solemnly remember and indeed pay tribute to the innocent Rwandan sisters and brothers who were mercilessly massacred during the genocide of 1994 ─ a genocide that has few parallels since the Second World War in its bestiality and horrendous cruelty. This is also an occasion that we are reminded of the devastation that can easily happen in front of our eyes when Africa and the world fails to take its collective responsibility to prevent such mass atrocities as the genocide in Rwanda
Excellencies,
Since the Ethiopian peacekeeping troops were among the first to arrive after the genocide, this atrocious crime is engraved in our national consciousness. The International Panel of Eminent Personalities that was established by the then Organization of African Unity upon the proposal made by my late Prime Minister H.E. Mr. Meles Zenawi, investigated the 1994 Genocide in Rwanda and concluded that

“If there is anything worse than the genocide itself, it is the knowledge that it did not have to happen. The simple, harsh, truth is that the genocide was not inevitable; and that it would have been relatively easy to stop it from happening prior to April 6, 1994, and then to mitigate the destruction significantly once it began”.

The Panel further indicated that “Ultimately, we reached the extremely disturbing conclusion that the international community was in fact in a position to avert this terrible tragedy entirely or in part”. It is therefore very clear that those in the international community, who had the position and the means, and most of all the obligation, to prevent the genocide, lacked the will to do so. The world failed Rwanda and hundreds of thousands of innocent human beings were senselessly massacred. That was indeed an unfortunate rude awakening for Africa that we have to build our capacity as a continent to prevent the occurrence of, and indeed act when necessary to stop, such egregious crimes. It gave us a sad lesson that Africa has to take a leading role in matters relating to its peace and stability.
Excellencies,
It is incontrovertible that times have changed in Africa, and for the better. In the aftermath of the genocide, the OAU established the Central Organ for Conflict Prevention, Management and Resolution, as agreed few months prior to the Rwandan genocide. Latter, as it is very well known, with the transformation of the OAU to the African Union, Africa did set up the AU Peace and Security Council as one of AU’s principal organs. The establishment of the PSC together with other organs, such as the African Court on Human and Peoples’ Rights, is indeed an institutional affirmation of the continent’s collective determination to give to the African Union the right to intervene in Member States in situations of grave circumstances, mainly war crimes, genocide and crimes against humanity, as stipulated in Article 4 of the Constitutive Act.
Today, we are extremely delighted to say Rwanda has come a long way from where it was some 21 years ago. Its economy has been growing in an impressive manner and has covered significant ground to achieve reconciliation among communities. It has also become a major Troop Contributing Country for the UN Peacekeeping missions, and has emerged as a major voice in Africa’s collective call for reformed UN peacekeeping system. Rwanda has also transformed some of its killing fields into memorial sites. We are of the view that the world should learn a lot from the people of Rwanda, who used home-grown solutions to bring reconciliation and overcome the after-effects of the genocide in their country. A country whose women have suffered the cruelest forms of savagery has now become a beacon of progress in empowering its women. This is even more relevant as we are celebrating the year of Women Empowerment in Africa.
Finally, Excellencies, I would like to close my brief remarks by once again stressing that the commemoration of the genocide in Rwanda should be an occasion to renew our commitment to prevent all forms of crimes against humanity, including genocide, from ever happening in our continent. We should strengthen our early warning system, build a rapid deployment capacity and strengthen the coordination between the RECs and our continental Union. We also should put in practice the commitments that we have all made in our Constitutive Act by fighting impunity and ensuring good governance.