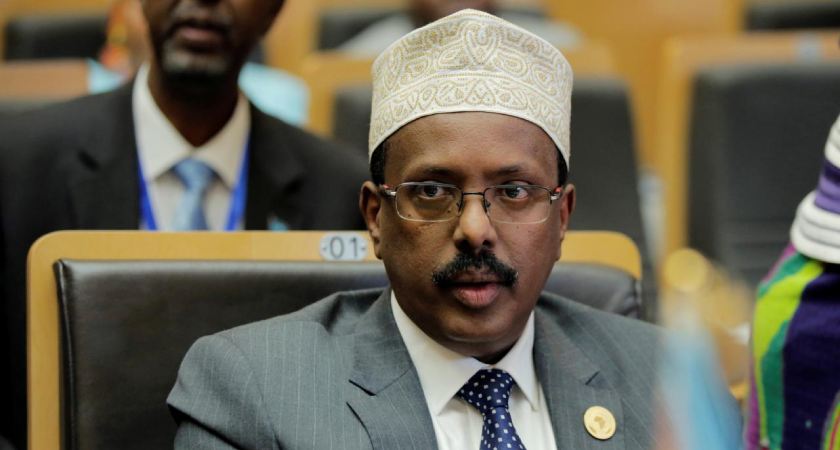 Dubbed the National Salvation Council (NSC), the alliance which comprises of the two regional leaders, the 15 member Council of Presidential Candidates (CPC) and the leadership of the pro-union Somaliland group announced Thursday they will be working on delivering elections after several rounds of talks with Farmaajo hit a brick wall.

In building their case for the new alliance, the NSC said it was forced to take action after Farmaajo frustrated talks for an electoral deal accusing him of bolting out of the Dhusamareb IV round as the ‘talks progressed’.

“The leaders have been meeting for some time to reach a consensus on how to hold free and fair elections in the country, [but] it is clear that the outgoing President, Mr. Moamned Abdullahi Farmajo, is a hindrance,” the Council said.

“It is unlikely that the country will be able to hold free and fair elections.” The Council which met at Airport Hotel within the precincts of the UN compound in Mogadishu also raised earlier accusations against Farmaajo citing the attack by security forces on a hotel hosting former presidents Hassan Sheikh Mohamud and Sharif Sheikh Hassan on February 19 which the CPC said was an assassination attempt.

The new alliance also accused Farmaajo of failing to convene another round of talks and using security forces to block opposition protests.

The Council said it would now proceed to ‘work for a peaceful and mutually acceptable election’ but did not indicate the modalities for achieving this goal. Also, the NSC will work on ensuring peace and stability and fight against any attempts which could destabilise the country. The CPC had made a similar call last month calling for Farmaajo’s resignation and handover of power to a Transitional National Council.

The NSC did not however make any demands on Farmaajo.

The Farmaajo faction has stood ground against revising the composition of the talks and might now be forced to choose between accepting the new structure or stick to its position. Either way, the road to an electoral deal in Somalia is getting bumpier.

As the NSC was meeting at Airport Hotel, across the expansive Halane compound, the joint elections committee which concluded its work last month was summoned at Decale Hotel within Aden Adde Airport by the Federal Government. Representatives of Farmaajo’s allies-HirShabelle, Galmudug, South West and Banaadir attended as Jubbaland and Puntland gave it a wide berth.

The coming together of the Deni-Madobe faction and the CPC could now pose adverse challenges to prospects for any meaningful talks with Farmaajo. Deni and Madobe who have insisted on the presence of CPC in the talks now have a stronger push since they might likely vacate their attendance to the talks as a Federal Member State only but now under the NSC umbrella.

The Farmaajo faction has stood ground against revising the composition of the talks and might now be forced to choose between accepting the new structure or stick to its position. Either way, the road to an electoral deal in Somalia is getting bumpier.

Sources have also told Goobjoog News Galmudug president Ahmed Qoorqoor is contemplating joining forces with the opposition. This comes following a meeting with the CPC members this week in Mogadishu. A source said the former minister was implored by the CPC against ‘blind loyalty to Farmaajo and was urged to resume hi mediator role.

The sixth round of talks has been hit by delays despite all the FMS leaders arriving in Mogadishu. Sources however indicate the talks might resume on Sunday. UN head in Somalia James Swan told VOA Somali yesterday he was banking on the country’s leadership to secure a compromise deal.

“We hope these political leaders along with others will get down to business and talk seriously about the future of the country,” Swan said.