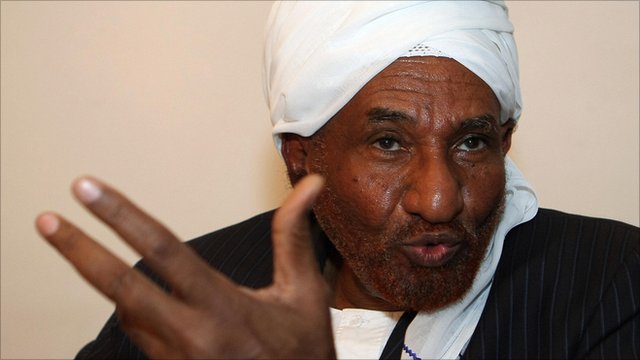 KHARTOUM (HAN) November 1, 2015. Public Diplomacy & Regional Security.  The leader of the National Umma Party (NUP) al-Sadiq al-Mahdi said he is prepared to return to Sudan by mid-November but said the exact date will be decided by the party leaders back in the country as well as signatories of the ‘Sudan Call’ and ‘Paris Declaration’ from other opposition groups.

Al-Mahdi said in a speech from his residence in Cairo, on the anniversary of the October 1964 popular Revolution that he tied his return to Sudan to holding a meeting between opposition forces in mid-November along with his needed presence in Sudan to launch an appeal conference to mobilize the Arab and Islamic nations which he said now only requires the formation of a “wise men committee”.

“This means that by mid-November I will be ready to return to the homeland and the actual date will be subject to the consultations of the NUP and colleagues in the Paris Declaration and Sudan Call,” he said.

The NUP chief left Sudan in August of last year, few months after his release from a brief detention after being accused of insulting the government militia Rapid Support Force (RSF).

His legal adviser secured his release after issuing an apology to Sudanese authorities and retracting his statements.

In his speech today, al-Mahdi called for seizing the dialogue opportunity to transform Sudan and bring about peace, democratic transformation and normalization with the international community.

He warned that the alternative is a violent scenario similar to the Libyan one.