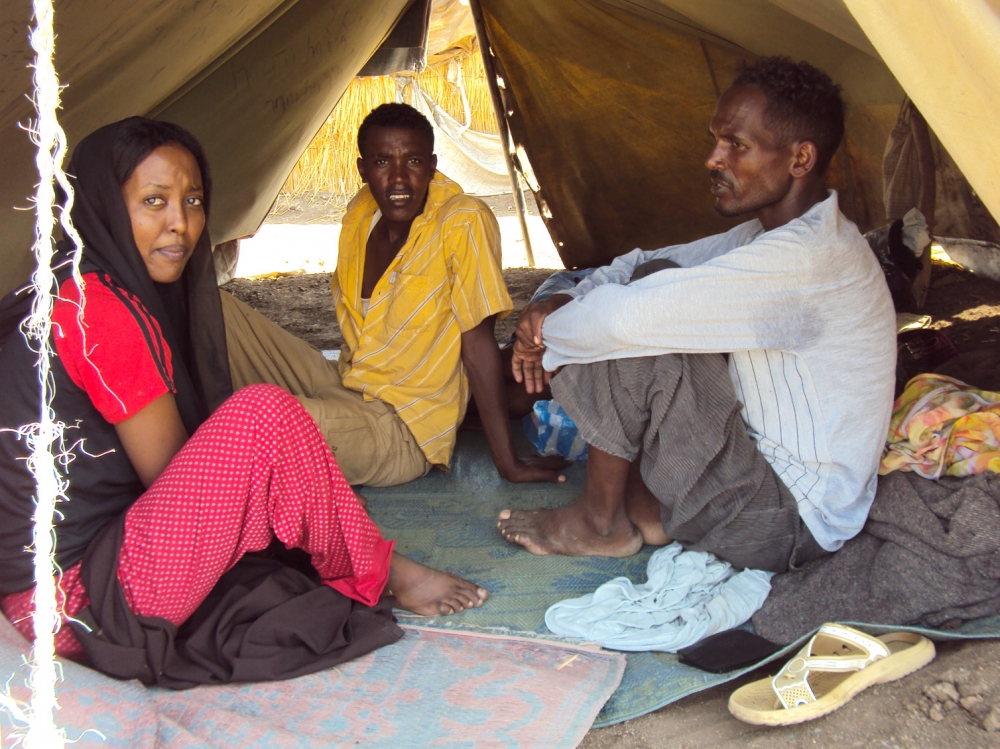 ADDIS ABABA (HAN) May 25.2016. Public Diplomacy & Regional Security News. Authorities in Sudan have launched a crackdown on Eritrean migrants – arresting those living in the capital, Khartoum, and intercepting hundreds travelling north through the country towards Libya, the launching point for smugglers’ boats heading for Europe.

Reports that 900 Eritreans were rounded up in Khartoum on Monday and that a further 400 arrested en route to Libya have been deported to Eritrea, come amid recent revelations in the British and German media that the EU is planning to deepen its cooperation with a number of African countries, including Sudan and Eritrea, to stem migration towards Europe.

Kibrom*, a 16-year-old Eritrean refugee who used the route through Sudan and Libya to reach Europe in 2015, told IRIN that his twin sister was among a group of 130 Eritreans captured by Sudanese soldiers in the town of Dongola, about halfway between Khartoum and the Libyan border, earlier this month.

Kibrom’s sister, along with the rest of the group, were taken to a prison in Khartoum where they spent three days. Kibron said he tried to alert the UN’s refugee agency, UNHCR, but failed to make contact.

“Only the Eritrean Embassy was informed. They took them in an open truck at night time to the Eritrean border,” he said. “From there they were taken to a prison located in my city – Teseney.”

Leaving Eritrea without permission is a criminal offense and Kibrom is extremely concerned about his sister, who was trying to evade military conscription, as well as his mother and two younger brothers who are still living in Teseney.

“My mother can’t even try to see my sister or she will be arrested as well,” he told IRIN over the phone from Sweden where he has applied for asylum. “I’m so worried what’s going to happen to them.”

A spokesperson with UNHCR’s office in Khartoum confirmed that a number of migrants, including Eritreans, had been intercepted in northern Sudan heading towards the Libyan border. Of those being held at the Aliens Detention Centre in Khartoum, UNHCR had only identified six individuals who had previously sought asylum and been recognized as refugees.

None of those six had been deported and the spokesperson did not comment on the other deportations but said: “If an individual does not apply for asylum through the channels provided and subsequently does not express a wish to seek asylum, Sudan may be within its legal right to pursue deportation of irregular migrants from its territory.

“For UNHCR, the principle prohibiting forcible returns or non-refoulement only takes centre stage when the affected individuals are persons of concern to UNHCR, which does not appear to be the case in this particular instance.”

It is unclear whether UNHCR had access to all of the Eritreans detained in Khartoum prior to their deportation. Meron Estefanos, an Eritrean activist based in Sweden who has been in touch with the relatives of some of the deportees, told IRIN that another group of around 300 Eritreans arrested while making their way to Libya were deported last Friday.

Sudan has a prior record of deporting Eritreans without allowing them access to asylum procedures, a practice that UNHCR has condemned in the past as amounting to refoulement.

In addition to the arrests of migrants in Sudan, Estefanos said there has also been a noticeable increase in controls on the Eritrean side of the Sudan-Eritrea border in the last two months. “Leaving Eritrea to Sudan is becoming hard now,” she told IRIN. “People are being intercepted and sent back.”

Last year, a UN inquiry found evidence that Eritrea is a totalitarian state responsible for “systemic, widespread and gross human rights violations” including a system of indefinite national service that amounts to forced labour.

Eritrean soldiers are instructed to shoot at anyone they discover trying to leave the country illegally, a policy that hasn’t prevented thousands from fleeing across the border every month. While the majority of Eritreans remain in camps in Sudan and Ethiopia, over 70,000 applied for asylum in Europe during 2014 and 2015, according to EuroStat figures.

Last week, Der Spiegel and the New Statesman reported on a leaked plan to increase cooperation with African countries of origin and transit for migrants. The articles alleged that the EU plans to use funding from the recently launched Emergency Trust Fund for Africa to send equipment and vehicles to help Sudan police its border with Eritrea and to assist with the construction of two closed reception centres in Gadaref and Kassala. Eritrea would be given assistance to develop or implement human trafficking regulations.

A spokesperson with the EU’s Office for International Cooperation and Development, said the reports were inaccurate and that there are currently no plans to provide equipment to the Sudanese government, or to help them build reception centres.

“Any decision to provide civilian equipment will be taken on the basis of a forthcoming appraisal mission to Sudan from the EU,” she said, adding that any future donation of equipment would comply with EU sanctions against Sudan, which include a ban on the provision of services related to military activities.

“The activities related to Sudan are part of a broader regional project in the Horn of Africa, worth EUR 40 million, financed under the EU Trust Fund for Africa and designed to improve migration management,” said the spokesperson, noting that the main objective was to cooperate on fighting trafficking and smuggling.

“No funding will be channelled through the beneficiary countries’ government structures.”

The EU has increasingly sought the cooperation of African states to control the flows of migrants headed for its shores by using the promise of aid and trade agreements. Critics argue that such policies have contributed to states viewing migrants as bargaining chips to be leveraged for maximum political capital with disastrous results for their safety and human rights.

Europe’s engagement with Sudan and Eritrea, and other countries along the Horn of Africa to Europe migration route, dates back to the Khartoum Process, launched in November 2014. The EU spokesperson said such initiatives were important for “keeping a dialogue going” with the otherwise isolated Eritrean regime.

But sceptics argue that the Khartoum process risks legitimizing the governments of Sudan and Eritrea by treating them as partners in tackling irregular migration, when in fact those countries’ own policies are a major factor in driving migration and fuelling migrant smuggling and trafficking. Sudanese officials have repeatedly been accused of colluding with or turning a blind eye to traffickers who kidnap Eritrean refugees and hold them for ransom.

A former journalist from Eritrea, who asked not to be named, said that Eritrea’s stepped up border controls were partly related to security concerns as it celebrates 25 years of independence, but that they were also about “trying to make themselves look like a good partner” to the EU.

“They’re helping the trafficking networks become smarter, because people will still look for a way out,” he told IRIN. “If these people stay in power, there’s no way to stop migration.”

*Not his real name