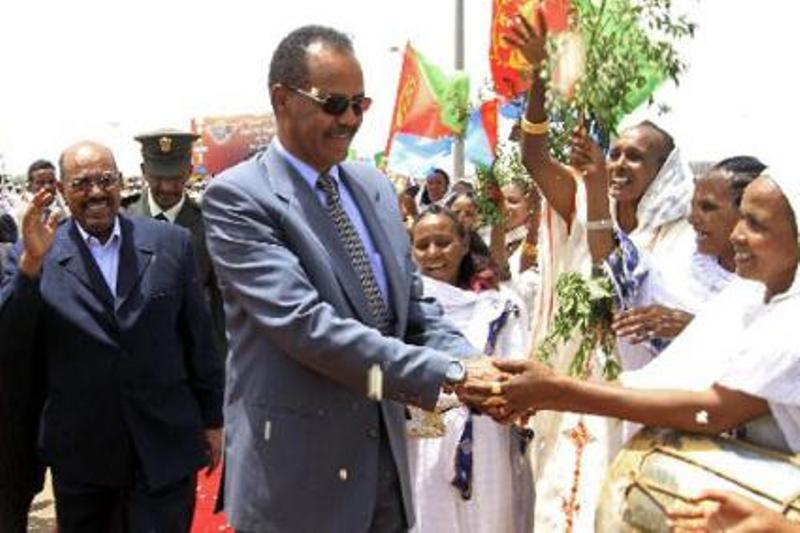 President Isaias Afwerki said that the Ethiopian propaganda against Eritrea had its roots in Washington’s “failed agendas in Eritrea” and “wrong calculations in Eritrea”.

Washington’s decision not to let President Isaias Afewerki join over forty other African heads of government for the US-Africa summit in D.C. early this month was a huge blow to the regime but a monumental victory for Eritreans fighting for freedom and democracy.

Like Isaias, Sudan’s Al-Bashir and Zimbabwe’s Mugabe were also uninvited for committing genocidal atrocities against their own people. The barely known interim leader of the war-torn Central African Republic Catherine Samba-Panza was also not invited. To be consistent, the US should also have excluded other repressive dictators, among them, Equatorial Guinea’s Nguema and Uganda’s Museveni.

Keeping aside its inconsistencies, the US saw no purpose in inviting Isaias who is widely seen as Africa’s worst violator of fundamental human and democratic rights. His government has not only been committing atrocities against Eritreans, but as the UN Somalia and Eritrea Monitoring Group has concluded, it has also supported international terrorism by aiding and abetting the deadly Al-Qaeda linked Al-Shabab group which has slaughtered thousands of civilians in Somalia and beyond.

It would have been a terrible setback for the exiled pro-democracy Eritrean movement had Isaias been invited as a guest in Washington, where he would be lecturing on his impractical “self-reliance” philosophy and where he would be denying that thousands have been sent  to jail for their political or religious convictions as reported by human rights agencies.

Then to add salt to injury, there are the misinformed worshipers of the president who would be welcoming and cheering him. Ironically, most of these misguided followers fled the homeland because they themselves were unsafe and impoverished under Isaias or Mengistu Hailemariam before him.

Obama says no person wants to live in a society where the rule of law gives way to the rule of brutality and corruption. Visiting Africa in 2009, he emphasized that “Africa did not need strong men, but strong institutions.”

He was referring to democratic institutions where there is no trace of them in Eritrea. By excluding the Eritrean leader from the august Washington summit, the US President was sending the message that there is no peace or prosperity without political participation of the people.

Eritrea has come a long way since Isaias staged a disturbing “coup” against the people on September 18, 2001 when the press and dissenting voices were buried alive. He ordered the imprisonment of almost all of government ministers including the vice president as well as almost all journalists with privately owned newspapers. They have been languishing in unknown prisons since.

For several years following this fateful event, it was hard for exiled Eritrean journalists and activists to get the attention and support from the West let alone from a US President who now tells the Eritrean leader that he is not qualified to take part in talks pertaining to Africa’s future unless he first respects the will of his own people.

There was yet another embarrassing moment for the Isaias regime when in 2009 the 54-member African Union unanimously adopted a resolution to ask the UN Security Council to slap the Eritrean government with sanctions for posing a threat to the peace and security of the East and Horn of Africa Region. Two years later, the Security Council imposed yet more stringent economic and military sanctions on the Asmara government for failing to abide by the 2009 sanction resolutions.

In mid-December last year, Isaias was in Nairobi along with most of East and Horn of African leaders who had in the past condemned his siding with the Islamist radicals in Somalia, who have been threatening the stability of the region. He was among 20 heads of state attending Kenya’s 50th independence anniversary. President Uhuru Kenyatta is an ICC suspect for crimes against humanity and he needs any UN member state on his side. Apart from the fact that both leaders are in trouble, Uhuru and Isaias have nothing in common.

Although hyped by Eri-TV as an important three day Kenya trip, there were no reports of Uhuru-Isaias meetings in the State House or on the sidelines of the celebrations to discuss any investment or trade deals. During the festivities Isaias was many times seen next to former Kenya President Mwai Kibaki who is most unhappy with the Eritrean leader for his reported support of Al-Shabab. In 2011, the then-President Kibaki dispatched thousands of troops to Somalia after Al-Shabab attacked tourist sites and hotels in Kenya. Isaias could not have been thrilled with having Kibaki’s company in the anniversary programs given the huge rift between the two.

Isaias however found consolation and relief when he was warmly welcomed in an event organized by the Eritrean Community of refugees and immigrants in Nairobi many of whom were in need of visas and passports from the government in exchange for payment of the notorious 2% “diaspora income tax” banned under UN sanctions.

The Eritrean government lost almost all of its friends in Africa because of its alleged destabilizing role in the region and partly because of its poor foreign policy, thus leading to most damaging sanctions unprecedented in recent African history. At the UN, it could not garner the support of Russia or China when sanctions were debated in 2009 and again in 2011. In any case China or Russia could not do much to help unless regional blocs like IGAD-East Africa or the African Union were willing to cooperate.

Isaias and his advisors have repeatedly squandered the good-will and trust of African and western governments, and above all that of his own people claiming that the country was facing “unique” survival problems. For many years after the 1998-2000 war with Ethiopia, many Eritreans, young and old, wanted to sacrifice individual interests for the sake of the nation.

Western establishments were ok with this even though Isaias was openly becoming a full-fledged authoritarian trampling on democratic and human rights and defying US and UN warnings against his government’s reported association with Al-Shabab.

Contrary to Washington’s strongly held position, former US Under-Secretary for African Affairs Herman Cohen says Eritrea has had no contacts with Al-Shabab since 2009 and stresses that “Eritrean leadership fears Islamic militancy as much as any other country in the Horn of Africa region”.

Cohen and some International Crisis Group experts believe that ending the UN sanctions on Eritrea and resolving its border conflict with Ethiopia would automatically bring about change in domestic policy. Vital as such achievements would be in themselves, they cannot guarantee establishment of rule of law, and respect for rights and freedoms of the people. The government itself says it is ruling without a constitution, elections and enforcing endless national services because of external pressures.

The situation calls for change and neither the sanctions nor the “Ethiopia threat” can prevent the government to end repression and allow freedom of speech and start working with the people in building a democratic, prosperous country.

The next step would be to reestablish friendly relations with neighbors, beginning with Ethiopia. The president has reportedly said that Eritrea’s future is tied to that of Ethiopia. And Premier Hailemariam Desalegn of Ethiopia says he is ready to go to Asmara if it meant normalizing relations with Eritrea.

Such a move is bound to encourage him to normalize relations with Ethiopia as the best strategy to get rid of the excruciating sanctions. The US will not vote to have these sanctions lifted without the agreement from Ethiopia and other concerned East African governments.

Michael Abraha is a veteran radio and TV journalist of Eritrean origin. He has interviewed leaders such as Robert Mugabe and the late Idi Amin for TV/Radio programs. He runs a newly formed Free Media Project that aims to build free and responsible media in the Horn of Africa. foreign policy journal