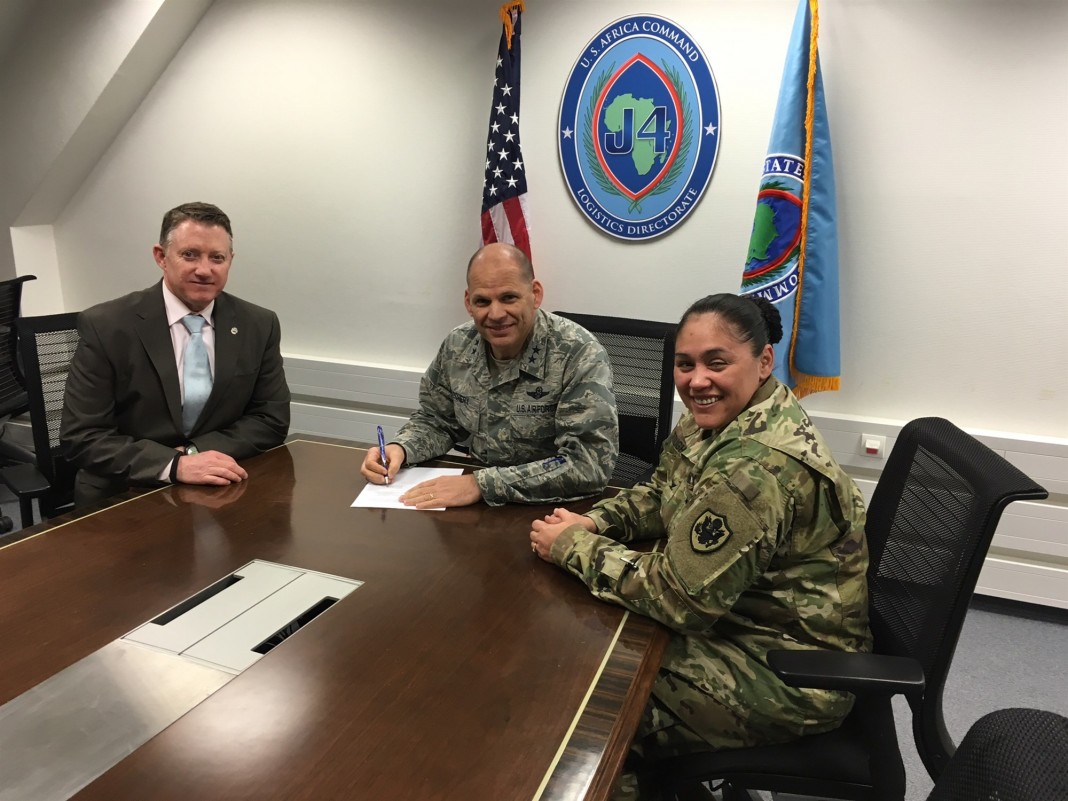 According to the agency’s website, DLA sources and provides nearly all of the consumable items the U.S. military needs – from food, fuel and energy to uniforms, medical supplies and construction material.

“DLA has really stepped up by giving us a full team of subject matter experts that will make an immediate difference when we have to react rapidly to a situation on the continent. We couldn’t do it without DLA,” said Paul Brown, AFRICOM deputy director for logistics.

Brown said the most prominent example of DLA’s support to AFRICOM was during Operation United Assistance – the U.S. military’s response to the 2014 Ebola outbreak in western Africa. He said the operation was a “huge logistics lift” involving moving thousands of troops and medical equipment in a matter of weeks.

“DLA headquarters was a tremendous help during that operation as a result of having the team embedded here,” Brown said.

DLA’s presence on the AFRICOM staff has expanded since then. Though the relationship between DLA and geographic combatant commands is outlined in several Department of Defense directives, this agreement outlines specifics, like how many DLA employees will work at AFRICOM’s headquarters in Stuttgart and what their roles will be.

“The agreement formalizes why an outside organization comes into AFRICOM, what we provide them and what they give us,” Brown said.

Currently, the agreement calls for 11 full-time employees to serve side-by-side with their counterparts in the AFRICOM J4 Directorate for Logistics and the AFRICOM Office of the Surgeon General. Individually their responsibilities vary, but collectively DLA employees provide AFRICOM with a direct connection to the agency responsible for providing the food, fuel, water, and supplies that U.S. service members need to perform their mission.

The agreement also states DLA representatives will be integrated into AFRICOM’s planning processes. At AFRICOM, planners prepare for everything from annual exercises like Flintlock 2016 to crisis operations like Operation United Assistance. Planners consider how, when and where to sustain forces and who provides that sustainment.

“Right now they’re embedded in all of our planning efforts and they are continuously communicating back to their headquarters,” Brown said. “DLA is already onboard, they’re already watching it, and they’re ready to respond.”

Leaders from AFRICOM and DLA will hold meetings semi-annually at a minimum to assess the agreement and make changes when necessary to better support AFRICOM’s mission.