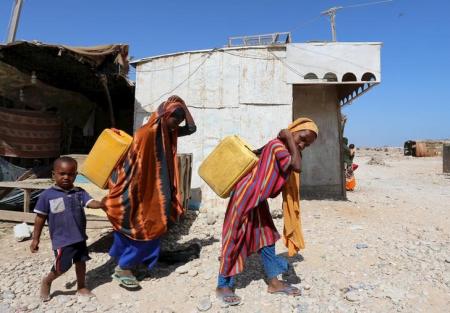 JOHANNESBURG October 17, 2015. Public Diplomacy and Regional Security Initiatives New.  The number of Africans trapped in poverty has surged by around 100 million over the past quarter century, the World Bank said on Friday, despite years of economic growth and multi-million dollar aid programmes. The report’s figures, described as “staggering” by the bank’s Africa head Makhtar Diop, showed widespread malnutrition, and rising violence against civilians, particularly in central regions and the Horn of Africa.

“It is projected that the world’s extreme poor will be increasingly concentrated in Africa,” Diop added in a foreword.

A surge in population meant the proportion of Africans in poverty had actually fallen since 1990, but the actual numbers were up.

In a major study of households taking stock of African economies and societies after two decades of relatively strong growth, the Bank said 388 million – 43 percent of the sub-Saharan region’s 900 million people – lived on less than $1.90 a day.

The findings present a mixed bag for countries that, on average, enjoyed economic growth of 4.5 percent over the last two decades, dubbed the era of ‘Africa Rising’ in contrast to the post-independence stagnation, war and decay that typified the 1970s and 1980s.

A child born in Africa now is likely to live more than six years longer than one born in 1995, the study found, while adult literacy rates over the same period have risen 4 percentage points.

However, the Bank defined Africa’s social achievements as “low in all domains” – for instance, tolerance of domestic violence in Africa is twice as high as other developing regions – and noted that the rates of improvement were levelling off.

“Despite the increase in school enrolment, today more than two out of five adults are unable to read or write,” the report said.

“Nearly two in five children are malnourished and one in eight women is underweight,” it continued. “At the other end of the spectrum, obesity is emerging as a new health concern.”

Perhaps most disturbingly, the study presented more evidence of the ‘resource curse’ that afflicts states endowed with plentiful reserves of hydrocarbons or minerals, often the source of internal or external conflict, or corruption and government ineptitude.

Citizens of resource-rich countries tended to be less literate, live 4.5 years less and have higher rates of malnutrition among women and children than other African states, the study found.

Although the number of full-scale wars afflicting the continent is down, the report also noted that outbreaks of violence against civilians were on the rise, especially in central Africa and the Horn of Africa.