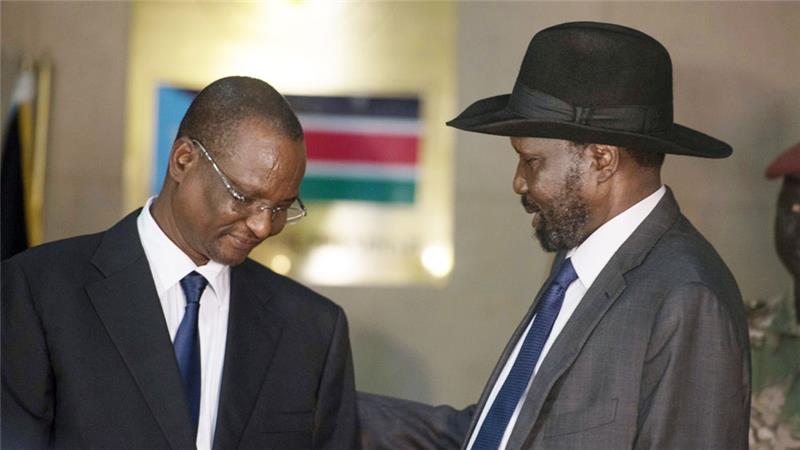 ADDIS ABABA (HAN) August 12.2016. Public Diplomacy & Regional Security News. The Peace and Security Council (PSC) of the African Union (AU) has echoed the call by IGAD for the newly appointed First Vice President of South Sudan, Taban Deng Gai, to step down so that Riek Machar, who held the position per the August 2015 until 24 July, be reinstated upon his return to the national capital, Juba.

The resolution passed at the 616th meeting of the AU’s PSC in Addis Ababa on Thursday also called for deployment of a third party protection force in Juba to take charge for the security in the capital.

It encourages both Machar to return to the peace process and for Gai to step down as he had assured the IGAD heads of state and government of doing.

“The decision encouraging Dr. Riek Machar to re-join the peace process and the commitment by General Taban Deng Gai to step down upon the return of Dr Machar with a view to returning to the status quo ante in line with the Agreement on the Resolution of the Conflict in the Republic of South Sudan (ARCSS),” partly reads the communiqué.

The PSC also recalled its previous communiqués and press statements on the situation in South Sudan, in particular, Communiqué [PSC/PR/1(DCXII)] adopted at its 611th meeting held on 11 July 2016, in Kigali, Rwanda, as well as the decision of the 27th Ordinary Session of the Assembly of the Union on the situation in South Sudan also held in Kigali, Rwanda on 18 July 2016.

The AU body expressed concern over the ongoing fighting around Juba and in other parts of the country which sparked on 7 July when rival soldiers fought on Gudele road followed by the palace clashes on 8 July.

“Once again, expresses serious concern over the outbreak of fighting that took place on 7 July 2016 in Juba, resulting in loss of lives, dire humanitarian crisis and other tragic consequences on civilians and strongly condemns human rights violations, including sexual violence against women and girls. Council calls for necessary investigations to be carried out, in order to bring the perpetrators to justice,” it said.

It commended the IGAD Plus for its continued leadership and unwavering commitment to the search for a sustainable resolution to the crisis in South Sudan.

It welcomed “the call for an urgent in-depth independent investigation by the AU on the fighting that took place in Juba and to identify those responsible with a view of ensuring that they are held accountable for their criminal acts.”

It requested the AU Commission, in consultation with the United Nations (UN), and building on existing regional and continental capabilities, to look into the best mechanisms for timely and effective action to address large scale mass atrocities in line with the relevant provisions of the Constitutive Act of the AU and the Protocol Establishing the Peace and Security Council of the African Union, and Chapter VIII of the UN Charter.

It supported the IGAD “call for the UN Security Council (UNSC) to extend the Mission of UNMISS with a revised mandate including the deployment of the Regional Protection Force.”

The statement called upon the parties to the August 2015 peace agreement to embrace mutual trust, put the interest of their country and its people above everything else and to scrupulously implement the accord. (ST)