Nairobi (HAN) April 29, 2014.  The Opinion of  Power & Influence page of  Geeska Afrika Online by Mohamed Olad Hassan. The story of a Somali-American teen stowaway who survived a freezing 5 1/2-hour flight from California to Hawaii while hidden in the wheel well of a jetliner has made news since shortly after his discovery April 20, 2014.  But for the Somali communities in the diaspora, the teen’s case is a reminder of huge challenges facing immigrant families ravaged by civil wars, poverty and unemployment. People in such situations are sometimes willing to take desperate, daring and calculated risks.

What led 15-year-old Yahya Abdi to jump a fence at San Jose International Airport and stow away on the jetliner bound for Maui?

According to unidentified law enforcement officials, the teen, who lived with his father, had argued with relatives and was trying to reach his mother in Somalia. In reality, she lives in an Ethiopian refugee camp that is home to about 10,200 displaced Somalis, a United Nations official told the Associated Press.

In two separate VOA Somali services interviews, both parents mentioned that extreme homesickness might have prompted Yahya to attempt the dangerous trip.

“He was always talking about Africa, where his grandparents still live,” Abdullahi said. “… We all wanted to go back, but due to the security and living conditions there we could not go back.”

Speaking to VOA Somalia Service from Sheed Dheer, the refugee camp, Ubah Mohamed Abdullahi said her son was homesick. She blamed the father for their son undertaking the dangerous journey.

As she talked, the mother expressed shock. She said she burst into tears when she heard the news of her son’s trip and miraculous survival.

“I felt bad that he risked his life,” she said. “I was told that he did this because of me.” 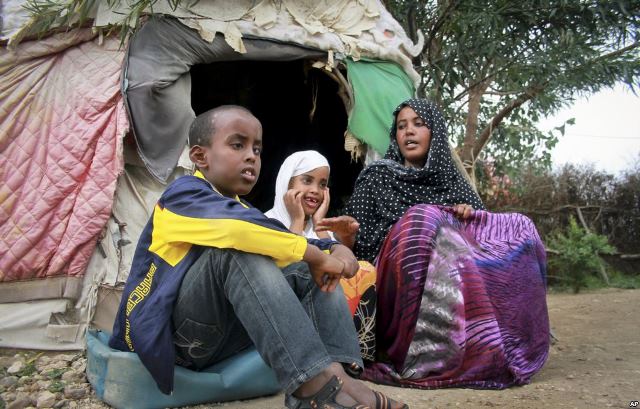 More than 21 years of lawlessness and civil war have forced thousands of Somalis to leave the country. Most of them say either they would have been caught in the cross fire or starve to death if they had stayed at home.

Abdinur Sheikh Mohamed, an education consultant with Ohio State University, said that the search for a better life abroad has disrupted some families.

“The family structure was broken in general by the process of looking for a second home,” he said. “Refuges in general go through these difficulties in bringing all these families together.

The U.S. has a reunification process for family members scattered across the world, but it takes a long time, he said.

Hashi Shafi, executive director of the Minneapolis-based Somali Action Alliance, said the California teen’s story is only one example of many fractured Somali families.

“I know a lot of  young kids in Minnesota who have been struggling with life lately,” Shafi said, “and when you talk to some of them, they tell you that they are missing their mother whom they haven’t seen for 10 to 16 years.”

Learning a new language and a new culture can be challenging.

Abdi Salan Sharif Adam, who teaches English as a second language for Minneapolis Public Schools, said academics are difficult for many Somali children.

“Some students will come to the school system having missed many years of schooling, and they start at an old age, a grade that is higher than their academic level,” he said. “There is always discrepancy between their educational ability and the levels they are placed.”

Abdi Salan blamed family disintegration for some problems within the Somali-American community.

“We do notice that many families do not have the entire family together,” Abdi Salan said.

Uncertain identity complicates things. Abdi Salan said students wonder, “Who am I? Am I Somali? Am I Muslim? Am I American? All These questions are not clear to many of the students and they guess and take different conflicting messages.”

Huge numbers of young African immigrants, among them significant portion of Somalis, risk their lives in search of a better life in Europe and U.S.
But for many of them, reality turned out to be far removed from their hopes.

Sa’id Gure took a long, perilous journey from Somalia through the Middle East, Eastern Europe and Mexico before reaching the United States. The 20-year-old said he misses his parents and siblings.

“I believe that one of life’s greatest risks is never daring to risk,” he said. “But when you constantly feel homesick and all your loved ones are not around you, I do not know how a young person can control his feelings. I think missing your family is a pain that can lead one to risk his life.”

VOA Reporter Olad’s Background:- Mohamed Olad Hassan: Somali journalist who has covered the people of his nation amid dangerous insurgency over the last decade, was awarded the Louis M. Lyons Award for Conscience and Integrity in Journalism at the Walter Lippmann House in Cambridge last night. Hassan, a senior correspondent and writer for BBC World Service and The Associated Press, has been called the “voice of the voiceless.”