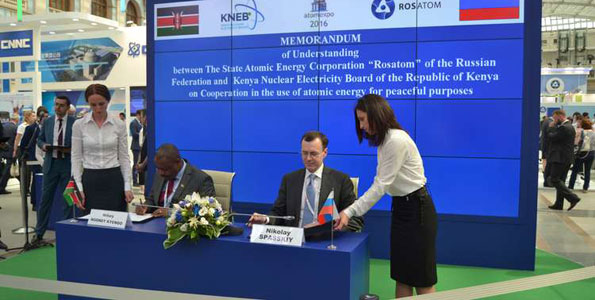 NAIROBI (HAN) June 4.2016. Public Diplomacy & Regional Security News. Africa is positioning itself as the next frontier for nuclear technology with several countries signing agreements to push ahead with programmes that are at various stages of development.

Kenya, Nigeria and Zambia signed separate deals with Rosatom, the Russian State Atomic Energy Corporation, at a three-day AtomExpo in Moscow, citing the need to diversify their energy sources and tap into the various uses of nuclear technology. Namibia, Egypt and Ghana also said they would continue with their plans.

The eighth edition of this annual event, considered the largest exhibition and business venue for meetings and negotiations on nuclear energy, which ended on June 1, attracted 4,500 delegates from at least 55 countries.

South Africa is the only country on
the continent that generates nuclear power, but has in the recent past faced opposition as it aims to boost its capacity.

On May 30, Kenya’s acting ambassador to Moscow Hillary Kyengo said he was confident the country was laying a firm foundation after signing a memorandum of understanding with Rosatom deputy director general Nokolay Spassky on the use of nuclear energy for peaceful purposes.

“In signing this MoU, we want our people to benefit by, for example, opening a window for students to be trained,” said Mr Kyengo.

Kenya Nuclear Energy Board (KNEB) acting CEO Collins Juma, who was part of a delegation of officials and Members of Parliament, told The EastAfrican that the agreement was important for capacity building and learning from Rosatom’s vast experience and good practices.

“I would not say we have reached a point where we have settled on the technology but when we do, safety will be the top priority whether we are talking of Russian, American, Chinese or French technology,” said Mr Juma, adding that there were still crucial issues like site selection and environmental concerns to be addressed.

Kenya has over the years indicated the need to diversify the energy sources from hydropower — whose capacity is strained by growing demand and unpredictable weather — by boosting renewable sources such as geothermal.

Last year, KNEB signed an agreement with China that broadly covered training and technical support, sparking speculation that Kenya would turn to the Chinese Hualong One technology for the building of its first nuclear reactor. There are also co-operation agreements with Slovakia and South Korea, but these are limited to training of students.

However, Mr Juma said the country was yet to settle on the technology to be used and the recent MoU with Rosatom would not affect previous agreements.

Mr Juma said that realistically the country expected to generate electricity from its first 1,000MW nuclear power plant between 2027 and 2030.

Another significant moment for Africa on the sidelines of the Moscow event was the signing of an inter-governmental agreement between Nigeria and Russia on co-operation in construction of the Centre for Nuclear Research and Technology.

The centre is meant to familiarise Africa’s biggest economy with nuclear technologies and their use in science, medicine and agriculture among other fields. There are also plans for the centre to manufacture isotopes for medical use.

On plans to generate nuclear power, the director general of the Nigeria Atomic Energy Commission, Dr Erepano Osaisai, said even though the country had huge reserves of oil and gas, the increasing population and growing demand meant there was need to diversify.

Zambia also signed an MoU with Russia on co-operation in the peaceful uses of nuclear energy, which includes training and the future development of facilities.

During a session on the “Future of nuclear power engineering: The New Players” at the AtomExpo, the Namibian delegation noted that even though the country was among the world’s top uranium producers, it still relied on South Africa for most of its power even though its giant neighbour was also grappling with a deficit. They gave strong indications that Namibia was going ahead with its nuclear energy plans.

Other countries that reaffirmed that their programmes were on course included Egypt and Ghana.

However, during the session, the new players acknowledged that even as they continued to plan to tap into nuclear energy, the huge cost of building the plants, safety and waste management were the key issues African countries wanted addressed.