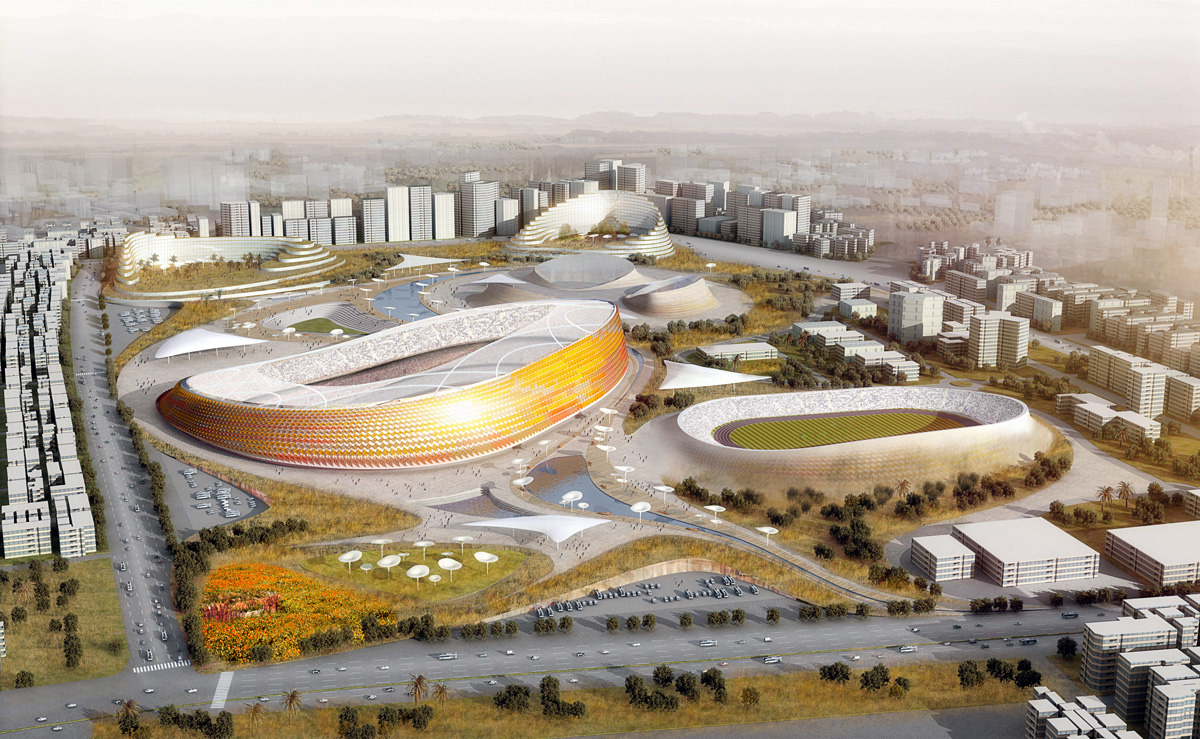 Four of the five are zonal stadiums which will be constructed in the districts of Yeka, Nifas Silk Lafto, Bole and Gullele . The zonal stadiums have a prototype design of 40,000sqm, 70,000sqm and 110,000sqm, in their order, whereas the plot for Gullele is not yet secured. Each of the stadiums has a carrying capacity of 30,000 people.

Despite the approach being taken by the Addis Abeba City Youth & Sport Bureau – fitting the zonal stadiums to space availed by the districts, a study done by Ministry of Urban Development & Housing, prescribes that a standard zonal stadium should rest on 113,080sqm, discounting additional space required for parking and other purposes.

Securing the land had been the priority of the Bureau since its establishment in 2015, following the federal restructuring of the new Ministry of Sport & Youth. In its six month life span, the new office has identified and agreed on the location of plots in the Bole, Yeka and Gullele districts.

The location in Bole will be situated next to Balderas, while the ones in Gullele and Yeka will be built on plots near Kechene Medhanealem and Ferensay Legasion around the French Embassy.

The process of securing the land is well-advanced; in Nifas Silk Lafto, it necessitated relocating 24 private houses and 54 government-owned entities. The site in Bole has already reached the stage where contractors have been invited to bid for the work and 20 companies have shown interest.

“We are pushing a project that has lagged for the past five years,” Asnake Muleta, deputy head of the Bureau told Fortune. “We’re undertaking the project on a fast track implementation system by escaping some bureaucratic procedures using shortcuts.” Going into construction without any feasibility study is one of the shortcuts considered.

There is a huge demand from the public, so we go for it, said Asenake. The design was, however, shelved until the new bureau decided to revamp it.

“The city’s Sport Commission then did not have the capacity to carry out such projects,” the deputy head said.

Sources close to the case, however, find the explanation for the delay in budget shortage and lack of feasibility studies carried out before design work proceeds. The deputy head of the bureau does not deny the situation.

“We tried to bridge the gap,” Asnake said. “The price quote for the study by Addis Abeba University was deemed too high so we dropped it.”

However, the eyes of experience can clearly see a failed project even before it starts.

“Whether it is solely for profit or social causes, a feasibility study is crucial in such cases,” said an expert in an investment consulting company who wished to remain unnamed. “Such acts always end in dismay as the sustainability of projects done without feasibility studies is compromised,” he added.

According to recent reports released by the association of contractors, the construction sector of the country has also identified lack of feasibility studies in the construction designing stage as a fertile ground for corruption and low quality outputs.

“We have only done one design,” Begziabher Alebel, (PhD), general manager of Ultimate Plan toldFortune. “The other three must have been adapted. Such projects must take into consideration profitability of the stadium for the sake of at least sustainability,” Begziabhe continued.

He was surprised that a one-size-fits-all approach was adopted despite the difference in size and population of the different districts.

Designed by Yohannes Abay consultancy, the fifth project, Akaki-Kality Stadium has a carrying capacity 60,000, double that of the zonal stadiums. If all goes as planned, the Akaki-Kality Stadium will be the biggest in the City. Currently, the largest and over seven decades old Yidnekachew Tessema Stadium a.k.a. Addis Abeba Stadium, has the capacity to accommodate 35,000 only.

The Akaki stadium is a project that has been dragging since 2013. Teklebirhan Ambaye Construction (TACON) was awarded construction work in the same year for 1.3 billion Br, only to stall before a significant chunk of the work had been done.

Now, once again the issue of finance is far from being resolved.

“Each of the four stadiums is estimated to cost between 300 million Br to half a billion Birr,” deputy head of the Bureau told Fortune.

However, an architect involved in the process told Fortune that the price for the zonal stadium is too exaggerated and it will probably cost 300 million Br each.

Only 230 million Br has been set aside for the Bureau’s overall capital projects for the current fiscal year.