Home Ethiopia A week in the Horn 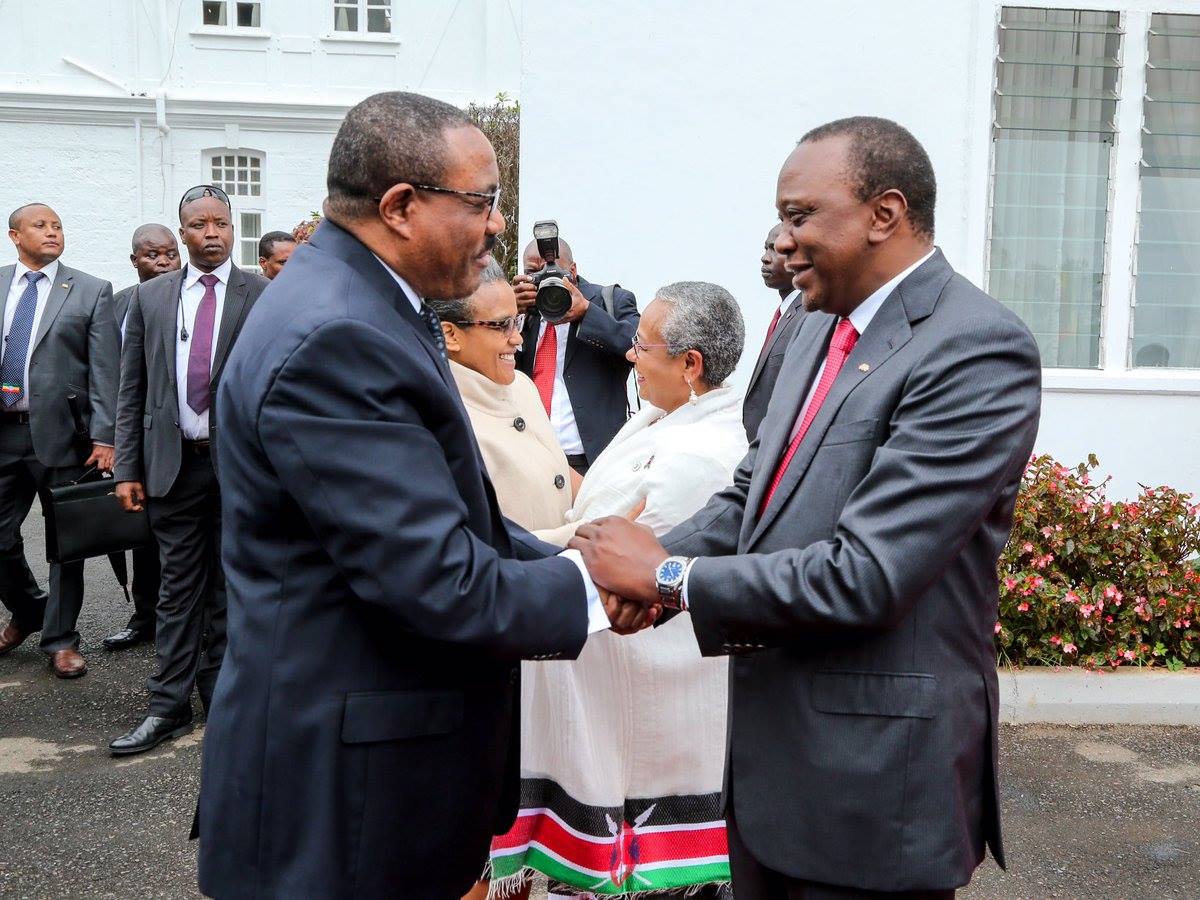 A two -day conference themed: ‘Global Education for Peace in Africa’ celebrating the 50th anniversary of the Africa Regional Conference and the Golden Jubilee of the establishment of the world-renowned University of Bradford of the United Kingdom opened on Friday (June 24). Opening the conference, Deputy Premier Demeke Mekonnen said that the issue of peace and education are pressing issues for the overall development of Africa and Ethiopia is working towards peace building at regional and international levels beyond the national priorities and endeavors in the area.

An AUC delegation led by the Deputy Chairperson Erastus Mwencha met with Huawei’s Senior Vice-President Dr. Gong Yuanxing in Beijing on (June 22) to exchange views on methodologies that would further strengthen Africa’s ICT development and industrialization strategy whilst concretizing Huawei’s investment within the Continent.

The Presiding Officer of the Economic, Social and Cultural Council (ECOSOCC) of the African Union (AU), Dr. Joseph Chilengi on (June 24) held a series of consultations with the Mandela – Washington fellows as part of the Africa Regional Conference of the Young African Leaders Initiative (YALI) which were held in West, South and East Africa.

Prime Minister Hailemariam Desalegn has been on a three-day visit to the Republic of Kenya this week (June 22-24) where he met Kenyan President Uhuru Kenyatta and discussed on ways of deepening the bilateral ties and expanding the level of cooperation between the two countries.  (See article)

Ethiopia and Kenya signed an agreement to start the construction of the Ethio-Kenya oil pipeline on Thursday (June 23). The signing of the agreements was witnessed by Prime Minister Hailemariam Desalegn and President Uhuru Kenyatta, wherein both leaders reiterated the importance of implementing the signed agreements.

Prime Minister Hailemariam on (June 22) met with a delegation from Chinese textile and light manufacturing associations. The Premier briefed the delegation on investment opportunities available in Ethiopia. He said his country is keen to do all it can to expand the bilateral investment ties. Head of the delegation, Ms. Helen Hai, noted that Ethiopia’s fast economic growth and government’s commitment has already begun to encourage investors.

The 35th Ethio-Kenya Joint Ministerial Commission (JMC) Meeting was held at Radisson Blue Hotel in Nairobi, Kenya this week (June 21). The JMC meeting was organized with the fundamental aspiration of reviewing progress on ongoing LAPSSET projects and other energy related projects and agreements, which seeks stronger cooperation on a range of matters, including border management and reducing human trafficking. (See article)

Foreign Minister Dr. Tedros received Managing Director of Tuia International Consulting, Mr. Timothy Gibson on Tuesday (June 21). Mr. Timothy mentioned how the opening of Ethiopia’s economy for potential investors had encouraged the company to pick the country as a prospective field of investment, particularly in dairy industries. The Foreign Minister gave his assurance that the government would provide his support for potential investors who would put-in their financial and technological assets not only in the livestock sector but also in other areas.

Ethiopia and the African Road Maintenance Fund Association (ARMFA) have signed (June 22) an agreement on the establishment of ARMFA’s regional office in Addis Ababa. The agreement was signed by Ambassador Taye Atske-Selassie, State Minister of Foreign Affairs of Ethiopia and Rashid Mohammed, Representative of the African Road Maintenance Fund Association.

Ethiopian Ambassador to Sudan Abadi Zemo and Foreign Minister of Sudan, Prof Ibrahim Ghandour on (June 22) discussed progress of the relations between the two countries and means of consolidating them further, particularly in the economic and trade fields.

Unilever, the London based company and the world’s second-biggest consumer-products maker, has opened its first factory in Ethiopia on Thursday (June 23). The factory was built in Dukem town, near the capital Addis Ababa. Unilever is one of the world’s leading manufacturers of several consumer products including; food stuffs, personal care and home products.

World Refuge Day this year was celebrated in Ethiopia at the National Cultural Center in Addis Ababa on June 17 and, on June 20, at the Tsore Refugee Camp in Benishangul Gumuz Regional State as well. (See article)

Thousands of Eritrean refugees staged a demonstration in Addis Ababa this week (June 23, 2016) in support of the recent report of the UN Commission of Inquiry, which states unequivocally that crimes against humanity have been committed in Eritrea over the past 25 years. “The findings of the commission have established what we, the victims, had already known and felt for years,” said Tewodros Aregay, vice president of Eritrean Refugees in Ethiopia. Demonstrators have urged the African Union to take action in light of the report of the UN Commission of Inquiry on Human Rights in Eritrea.

U.S. President Barack Obama spoke by telephone on Thursday (June 23) with Kenyan President Uhuru Kenyatta on the need for strong international support for refugees living in Kenya, the White House said. The statement added that Obama and Kenyatta “agreed that the United States and Kenya would work closely together on this issue, to better ensure that the needs of refugees and host communities are met.”

Kenya will begin closing the Dadaab refugee camp on July 1, an Interior Ministry official said on Thursday (June 23). Amos Gathecha, the ministry’s security and operations secretary at a meeting of stakeholders in Kenya’s tourism industry said, “We are aware of the international outcry regarding the closure; we are not going back on closing Daadab.”

Ethiopia and Kenya signed an agreement to start the construction of the Ethio-Kenya oil pipeline on Thursday (June 23).

The 35th Ethio-Kenya Joint Ministerial Commission (JMC) Meeting was held at Radisson Blue Hotel in Nairobi, Kenya this week (June 21). The JMC meeting was organized with the fundamental aspiration of reviewing progress on ongoing LAPSSET projects and other energy related projects and agreements, which seeks stronger cooperation on a range of matters, including border management and reducing human trafficking. (See article)

World Refugee Day was also celebrated in Kenya on Monday (June 20) as it has been every year since 2000. (See article)

In a report for World Refugee Day on Monday (June 20), the United Nations High Commission for refugees (UNHCR) said conflict in countries like South Sudan and Somalia had raised the total number of refugees and internally displaced persons in sub-Saharan Africa to 18.4 million in 2015. (See article)

Federal government and regional leaders arrived in Baidoa on Wednesday (June 22) to continue National Leaders’ Forum talks on the format of the elections. The meeting is expected to finalize the modalities for the August election for members of parliament but other issues on the agenda include national security, the status of the capital and cooperation between regional state leaders.

A delegation led by the IGAD’s envoy to Somalia, Ambassador Mohamed Abdi Affey, arrived in Beled Weyne this week to facilitate the inter-state formation of Hiiraan and Middle Shabelle. The delegation which included senior officials from the Ethiopian foreign ministry, met with Ugas Hassan and clan elders to discuss state formation.

The IGAD Political Affairs Program in collaboration with IGAD’s Somalia Facilitation Office has organized the visit of 16 Somali officials from the Ministry of Foreign Affairs, Puntland, Jubaland, SouthWest and Galmudug regions to Ethiopia this week to look at Federalism. The group is visiting the Ministry of Federal and Pastoralist Affairs, the House of Federations, the House of People’s Representatives, Oromia Regional State, the Forum of Federations Office and Ethiopia’s Somali Regional State.

The United Nations on Wednesday (June 22) said that it would send peacekeepers home over a “lack of responsiveness” during a bloody attack on a UN-run camp in South Sudan in February.

In a report for World Refugee Day on Monday (June 20), the United Nations High Commission for refugees (UNHCR) said conflict in countries like South Sudan and Somalia had raised the total number of refugees and internally displaced persons in sub-Saharan Africa to 18.4 million in 2015.(See article)

South Sudan’s deputy Central Bank governor, John Dor Majok on Thursday (June 23) said the country’s foreign currency reserve is likely to last for only a month. He reportedly said, “The reserves we have may cover only imports of only five weeks.”

The National Dialogue Coordination Committee (7+7) on Thursday (June 23) welcomed the ongoing regional and international efforts to persuade opposition forces and armed movements to sign an African Union brokered roadmap for peace in Sudan.

The Ministry of Guidance and Endowments on Monday (June 20) said it had signed a Memorandum of Understanding with the United Nations Development Program (UNDP) to coordinate efforts to fight against extremism and terrorism.