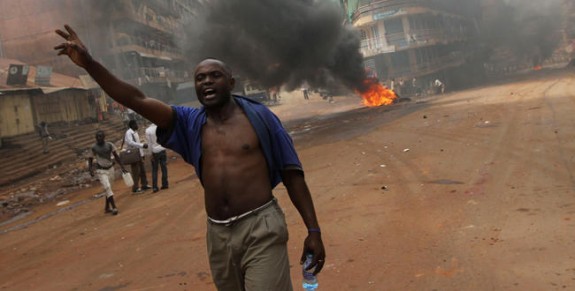 KAMPALA (HAN) June 13.2016. Public Diplomacy & Regional Security News. By MICHAEL MUTYABA. On a lunch break with a group of friends last month, our conversation was suddenly interrupted by the roar of a group of fighter jets flying over the hills of Kampala. The seemingly new Russia-made Sukhoi Su 30-MK2 war jets twisted and turned in the air, leaving the residents of Kampala musing at this unusual sight. That very afternoon, the Minister of Information, Jim Muhwezi, addressed a rushed press conference, announcing a government ban on any further media coverage of the newly-announced opposition-led “defiance” campaign. The police chief nodded. The message was clear.

The jets have since become a common sight. Meanwhile, since February, columns of between eight to 10 soldiers can often be seen strolling the streets of Kampala any time of the day. The now all-too-common police vehicles are strategically positioned around the city, well equipped with teargas, policemen and sometimes plain-clothed operatives. At the headquarters of the key opposition party, Forum for Democratic Change (FDC), garrisons of armed men daily stand still, their mean-looking faces sending a warning message to any potential protestor. Homes of key opposition politicians have routinely been placed under siege, and social media has been frequently switched off in recent weeks.

This has been the regime’s grim response to the defiance campaign, which calls for civil disobedience until the government cedes to an independent audit of the election results released in February, which gave the 72 year-old president Yoweri Museveni and his National Resistance Movement (NRM) party – in power since 1986 – a controversial victory, with 60% of the vote, and a fifth term in office.

So far, the regime’s response to the planned protests has revealed its deep-seated fears of a possible “Ugandan spring.” When, in 2011, demonstrations broke out in nearby Egypt, the media – especially social media – proved an indispensable tool to the thousands of youthful protestors in Tahrir Square. The protests spread like a wildfire. Mubarak fell. Soon after, inspired by the Tahrir protests, Kampala witnessed the first serious protest against NRM rule, constituted in the Walk-to-Work protests. They were eventually crushed, largely because the protestors framed their demands purely in economic terms, focusing merely on the escalating prices of oil and foodstuffs. Nevertheless, the protests left an indelible mark on Ugandans’ political psyche.

The recent defiance campaign in Kampala, coming five years later, is a reincarnation of the Walk-to-Work protests, albeit bolder in its objectives. Unlike its predecessor, the defiance campaign is unapologetically political in its demands, challenging the very legitimacy of the Museveni regime, and thus approaching the Egyptian revolution, at least in purpose. That the regime has in no way missed the real message behind the demand for a special audit of election results is evident in the harsher response the campaign has so far received. This, however, has made the future of the planned protests very uncertain, and many Ugandans have been hesitant to identify with them for fear of retribution.

The regime’s message has been clear: the government will take no chances. Any protest movement will be nipped in the bud before it crystallizes. The strategy has paid off – at least for now. The streets have been largely clear. Yet, the recent narrowing of political space, far from containing popular dissent, has made it even more likely that any popular demands in future will have to find expression outside the formal mechanisms of the political system. With faith in the electoral system significantly eroded, popular protests outlawed and the media banned from covering opposition activities, it might only be a matter of time before popular energy erupts in a new movement, one perhaps even more dramatic than that in Tahrir. After all, the North African protests were driven not by the media per se, as NRM logic has it, but by the politics of repression.

The future of the current defiance campaign might be bleak, but the radical nature of its demands, compared to its predecessor, calls for deeper reflection on an important contemporary lesson: the more political space shrinks, the more likely it is that popular discontent will seek for alternative channels through which to articulate itself, sometimes even at the risk of violence.