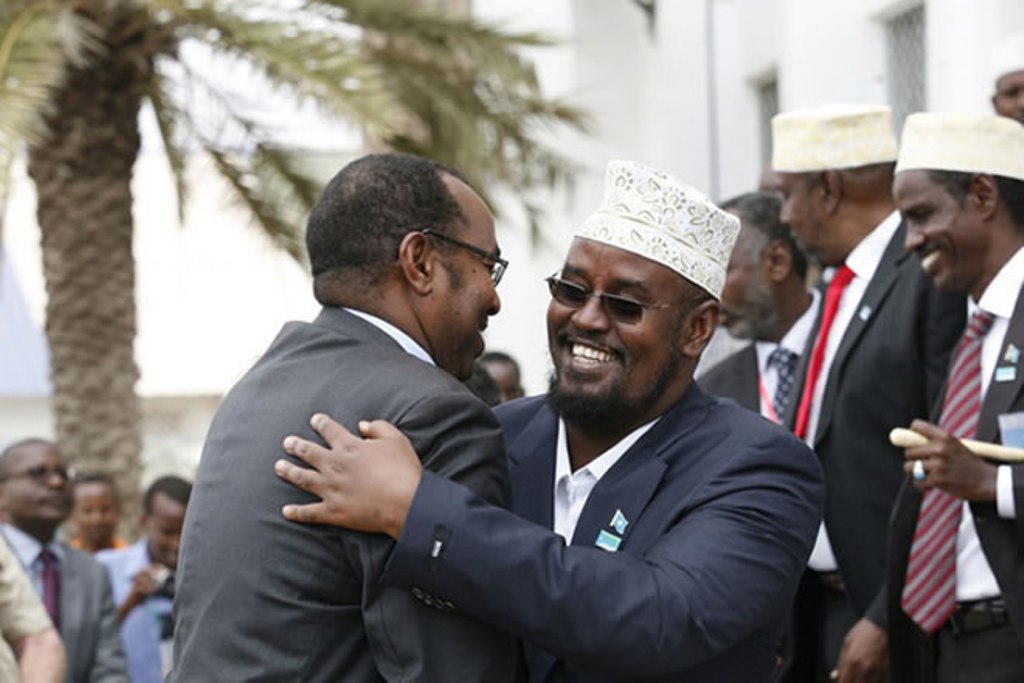 Nairobi (HAN) September 20, 2014 – Public Diplomacy and Regional security News. The Geeska Afrika Online strategic investigator learned the real issues, which is the Norwegian companies awarded exploration rights in the contested area is one of the most important issues arising from the inability of Kenya and Somalia to come to an agreement on their maritime boundary, is that their legal claims to sell exploration blocks and collect revenue from any subsequent discoveries, are at risk.

According to ADOW JUBAT statement, the Intergovernmental Authority on Development Special envoy to Somalia Ambassador Mohammed Abdi Affey has dismissed claims that Kenya is keen on creating Jubbaland in Somalia as a buffer state against the AL-Shabaab militants. The former Wajir South MP said the claims are misconceptions and ignorance fronted by persons who don’t wish for peace in war scarred Somalia. Speaking to the Standard after attending the opening of a reconciliation conference for the communities in the Gedo, Middle Jubba and Lower Jubba regions in Kismayo, Affey said Jubbaland is just of the many federal states being created in Somalia.

“It is the people of Jubbaland that want to create a state and as IGAD we congratulate the people for embracing peace and solidifying Jubbaland”, he said.

Ambassador Affey said IGAD participated in convincing the militia leader Bare Adam Shire Hirale to lay down weapons and participate in the reconciliation meeting, that will end unnecessary bloodletting of innocent Somalis. Hirale has on previous occasions declined to attend peace processes and took the route of fighting to show his disapproval of the existence of Jubbaland state. See also: UN-funded African troops raped vulnerable Somalis Somalia’s president Hassan Sheikh Mohamud attended the opening of the reconciliation conference in Kismayo on Tuesday. Affey said that the president’s presence is a testament that he is supporting the initiative to create Jubbaland state.

Ambassador Affey said the creation of a successful Jubbaland state will be a model for other states proposed to be formed. He said the 21 day reconciliation meeting in Kismayo will seek to bring together all clans and sub-clans so that the clans in Somalia can talk and resolve their issues on negotiations table and desist from use of violence as way of express dissenting opinions. He said militias in the Jubbaland have significantly been degraded and that IGAD will help the militias integrate with the Somali national forces. He at the same time said Jubbaland requires massive investment.

The Roots of the Dispute: Kenya’s Petroleum Energy Commissioner, Martin Heya, has previously confirmed that companies awarded exploration rights in the contested area, will be unable to begin exploration/drilling until the boundary dispute is settled, as it is unclear which country will receive the revenue from any subsequent resource discoveries.

The ongoing dispute over the boundary has the potential to deter interest in the offshore blocks. This comes at an unfortunate time, because the wider East Africa region has attracted considerable international interest and most importantly, promises of investment, following large discoveries of oil and natural gas. Gas discoveries have been made off the coasts of Mozambique and Tanzania; while Kenya has had onshore oil discoveries.

To resolve the issue, both governments need to sign a UN approved agreement, or alternatively, have the issue settled in the International Court of Justice (ICJ). If the case goes to the ICJ, it could take several years before the outcome is known. During that time, exploration would be affected. Neither of these options is likely to occur, however, until the situation in Somalia stabilises and there is a permanent and stable government there. Consequently, it is unlikely that the dispute will be settled in the short-term.