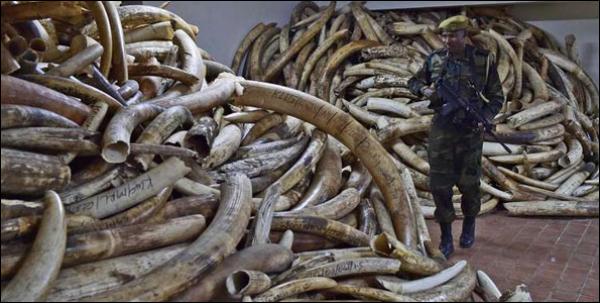 NAIROBI (HAN) April 30. 2016. Public Diplomacy & Regional Security News. Thousands of elephant tusks are being piled high into pyres as Kenya prepares to torch its vast ivory stockpile hoping to stop trafficking and prevent extinction of elephants in the wild.

Time is running out: At current rates of elephant killing, conservationists warn large herds of elephants will be wiped out within decades from all but the most protected of parks.

Following a regional summit on Friday to boost awareness of the threat of poaching and push efforts to end trafficking of ivory entirely, Kenya will take the symbolic step of torching almost the entirety of its stores, seven times the size of any stockpile destroyed so far.

The mass burning on Saturday will see Kenyan President Uhuru Kenyatta destroying 105 tonnes of ivory, representing over 6,700 elephants — or some five per cent of global stores.

Another 1.35 tonnes of rhino horn will also be burned.

But Kenya dismisses any suggestion that the tusks have value — apart from for the elephants.

Only valuable on elephants

“We don’t believe there is any intrinsic value in ivory, and therefore we’re going to burn all our stockpiles and demonstrate to the world that ivory is only valuable on elephants,” said Kitili Mbathi, director general of the Kenya Wildlife Service (KWS).

Kenya Wildlife Service Director-General Kitili Mbathi, right, and his deputy Patrick Omondi lead a team in moving elephant tusks from the headquarters’ strong room as Kenya prepares to torch its vast ivory stockpile hoping to stop trafficking and prevent extinction of elephants in the wild on April 4, 2016. PHOTO | MARTIN MUKANGU

On Friday, Kenyatta will host a summit meeting of African heads of state and conservationists in the central town of Nanyuki.

Among those expected to attend are President Yoweri Museveni from neighbouring Uganda, as well as President Ali Bongo from the west African nation of Gabon, which is home to half of Africa’s 80,000 forest elephants.

On the frontline of the war against poachers, in which armed guards battle gangs armed with assault rifles, Kenya has seen improvements: a total of 93 elephants were killed in 2015, compared with 164 in 2014, government figures show.

The other battle is to stamp out the trade itself, and send a message to those who still want to buy ivory.

Malaysia burned almost 10 tonnes of ivory seized from smugglers earlier this month, in an unprecedented and symbolic move. In west Africa, Cameroon followed days later by torching six tonnes of ivory, a first for the country.

The Convention on International Trade in Endangered Species of Wild Fauna and Flora (CITES) banned the ivory trade in 1989, and activists say destroying the stocks will help put anti-trafficking efforts at the top of the agenda at the next CITES conference in September.

“Ivory is worthless… on every metric — culturally, ecologically and economically — and in all cultures living elephants are valued over their dead teeth,” said Alex Rhodes, who heads the Stop Ivory group.

“This is reflected in the extraordinary common action to address a shared problem by putting ivory beyond economic use and closing markets.”

China, which has tightened its laws on ivory imports, allows the resale of ivory bought before the 1989 ban, but activists say the trade in legal ivory acts as a cover for illegal imports and call for a complete ban on sales.

A Kenya Wildlife Services ranger walks through a secure ivory stock room in Nairobi on March 21, 2016. Thousands of elephant tusks are being piled high into pyres as Kenya prepares to torch its vast ivory stockpile hoping to stop trafficking and prevent extinction of elephants in the wild. AFP PHOTO | CARL DE SOUZA

Conservationists argue fiercely that the value of an elephant alive, in terms of the income it brings in through tourism, is worth far more.

“And, in the long term, elephants are worth significantly more roaming the world’s savannahs and forests than with their tusks sitting on a mantlepiece or adorning someone’s wrist,” he said.

The trust suggest a single elephant alive could be worth as much as $1.6 million in terms of tourism revenues it brings in.

“Elephant conservation is a far more viable economic proposition than the ivory trade.”