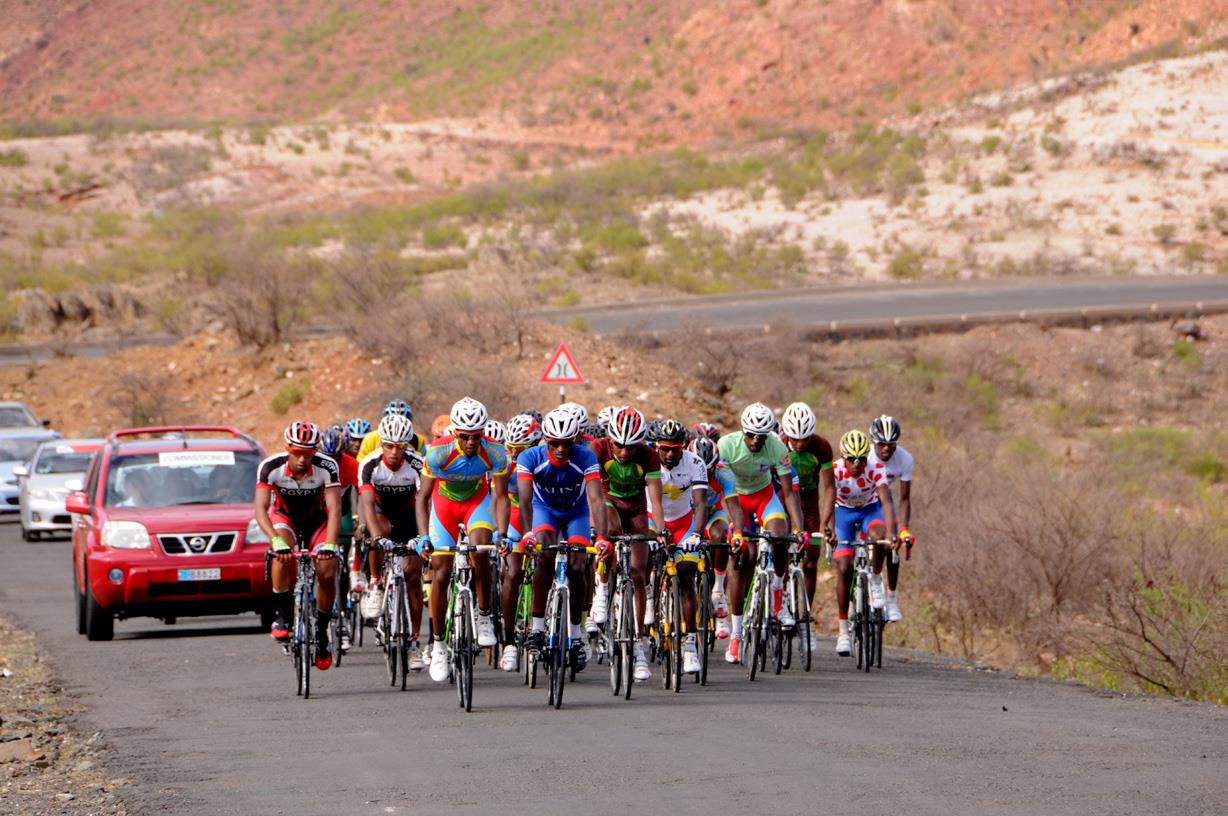 At 08: 10: 00 local time, the race commenced in the start line in Mendefera. As the race started once again similar to the previous days of the tour; riders kept a stable speed traveling in one big group. However as the category 3 of Menguda climb approached, riders started ascending at haste, with Kibrom Mahari (Tsinaat) and Hanibal Tesfay (Salina) making the cut.

They were shortly joined by the rest of the group. As the trail got clustered the raiders started speeding up, travelling at more than 50 km per hour. And even at such speed a leading trail was formed again by: Million Amanuel (Eritrea), Mehari Tesfatsion (Eritrea), Elyas Afewerki (Eritrea), Hanibal Tefay (Salina) and Kibrom Mahari (Tsinaat). They were soon joined by more Eritrean riders of team Eritrea, Salina, Tsinaat and Bike Aid.

With 54 km covered while 118 km remaining, there was Intermediate Sprint of Asmara in the ‘Blocco Godaif area’. Fast moving riders extended, headed for the sprint. The sprit’s points went to Tesfay Mehretab of Salina attaining 5 points, followed by Meron Amanuel of Bike Aid, Aron Debretsion and Million Amaunuel of team Eritrea. In Asmara, cyclist were met by countless avid Asmarino fans spread out in sidewalks of Godaif until the peripheries of the city. The sport is indeed a treasure of Asmarinos; an unavoidable event in Sunday schedules!

Riders dashed through the streets of Asmara towards the margins of Asmara directed to the road of Massawa. The downhill incline of the route Asmara –Massawa starts more or less around the ‘Bet Gerghish’ area; it was overpowering swiftness from then on words.  And as the roller-coaster of the Asmara –Massawa route went on riders started falling apart: a clash of immediate and leisureliest.

The leading group was still the same, composed by Eritrean Riders, up until when Eugenio Bani (Amore Vita) joined the leading trail at around Dongolo area. In Gahtelay the leading trail traveled together at a time difference of 00: 02: 00 minutes ahead of the, somewhat, small peloton and the tailing groups. The last intermediate sprint of the day was in Mai Atal 142 km away from the start. Meron Teshome (Bike Aid) in first place was trailed by Mehari Tesfatsion (Eritrea), Aklilu Gebrehiwot (Tsinaat) and Hanibal Tesfay (Salina) in fourth place with 1 point.

The nature of the race maintained its format until the finishing line in Massawa, with more speed of the front runners and more riders falling apart when the heat of the plains of Massawa appeared coupled amid typical hot weather. 04: 05: 08 of pedalling got Elyas Afewerki (Eritrea) in first place, 02 seconds later in Meron Amanuel (Bike Aid) arrived second and in third Meron Abraham (Salina) 05 seconds behind first place.

The top ten riders who reached the finishing line were all Eritrean riders with only one non- Eritrean rider in seventh place: Eugenio Bani (Amore Vita). He arrived 05 seconds behind first place, he keeps repudiating to stay behind Eritrean colleagues, accustomed with the Eritrean geographic composition.

Eugenio Bani (Amore Vita) got the blue jersey for the second time in Massawa for best foreign rider, the yellow jersey is with Merhawi Goitom (Tsinaat) for the second day he also has the white for U23; Green for Meron Amanuel(Bike Aid) for attaining most points while the polka dot is with best climber Hanibal Tesfay (Salina).

The last stage of the 2.2 UCI category will be carried out tomorrow April 23, with an uphill route from Massawa to Asmara.