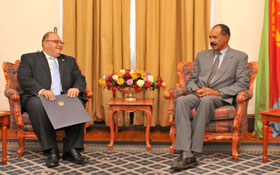 At a meeting conducted with each Ambassador, President Isaias Afwerki explained on the current situation and the ongoing national development programmes as well as on the relevant regional and international issues.    President Isaias further asserted Eritrea’s readiness to consolidate ties of bilateral cooperation with partners on the basis of mutual interest and respect.

In separate interviews conducted with ERINA, the Ambassadors expressed the prevailing desire in their respective home countries to strengthen existing ties with Eritrea and invariably spoke of the peace and stability that prevails in the country.

Foreign Minister Osman Saleh and other senior government officials were present at the ceremonies. 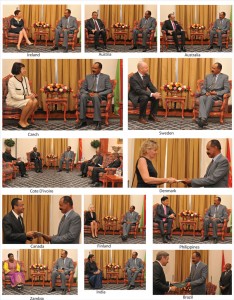