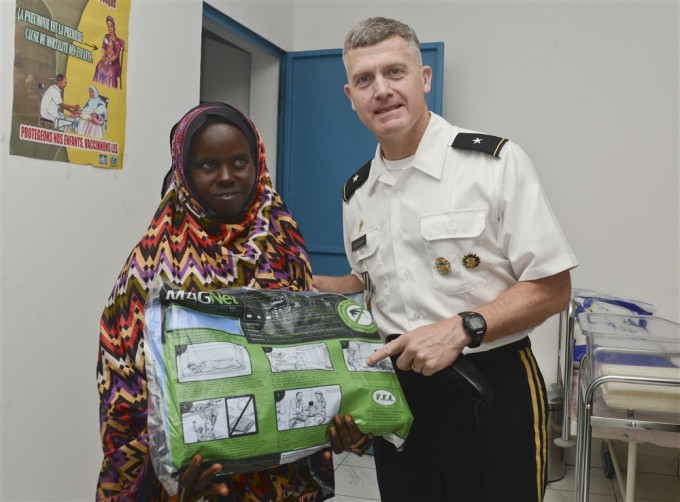 The Djibouti Defense Minister, the U.S. Ambassador to Djibouti and many senior leaders from the Djibouti Armed Forces arrived at Camp Lemonnier to attend the Djiboutian Soldier Recognition Ceremony on the morning of March 25, 2014. It was standing room only when the ceremony started, as hundreds of members of CJTF-HOA and Camp Lemonnier attended to show support for the Djiboutian soldiers, as well as Craig, Ruppert and Thompson.

Brig. Gen. Wayne Grigsby Jr., CJTF-HOA commanding general, made the opening remarks and said words like integrity, honor, dignity and respect are woven into the fabric of the military profession. It is this set of values, service to our nation and each other that sets the military apart.

“It has been said that these common values are perhaps not so common at all, but they are common here today among the Djiboutian Armed Forces and the men and women of Combined Joint Task Force–Horn of Africa,” Grigsby said. “They serve as the very foundation of friendship, shared understanding and trust between our two strong and great nations.”

After opening remarks and a review of the troops, Younis, Hoch, Youssouf and Mohamed were asked to come to the front, where they received a standing ovation. Each soldier was presented with the Civilian Award for Humanitarian Service.

Both the U.S. Ambassador to Djibouti Geeta Pasi and the Djibouti Defense Minister Hassan Darar Houffaneh had appreciative words to say about the ceremony, the soldiers, and the pilots.

“I wanted to express my sincere thanks especially to Major Heath Ruppert and Susan Craig who came especially from United States, a long distance, in order to thank our soldiers who helped them eight years before,” Hassan said. “I was very impressed and I wanted to tell them thank you very much … long live the cooperation between Djibouti and the United States and between the two armies. Thank you very much.”

The reunion and recognition ceremony provided a small sense of closure for the soldiers, the surviving pilots and Thompson and serve as an example that through shared values and common effort, soldiers from different nations can overcome almost any obstacle.

“I’m forever grateful, they are mine and my family’s heroes and we are very appreciative that Susan and I had the opportunity to be here to see these men,” Ruppert said.