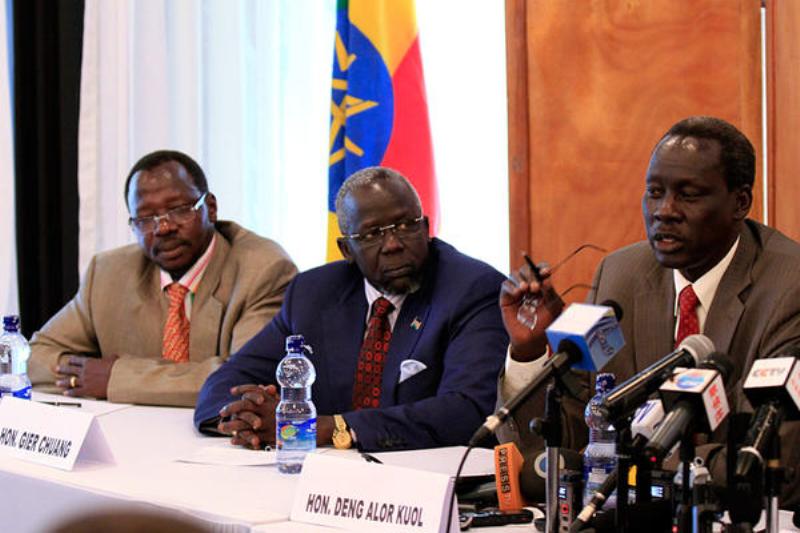 Nairobi (HAN) April 7, 2014 – Warring factions from South Sudan’s ruling elite are in negotiations aimed at finding a long-term solution to a crisis that has displaced almost a million people and killed thousands.
The former cabinet minister of South Sudan, Deng Alor Kuol said “South Sudan should join the rest of the world in making sure that South Sudan’s people have enough to eat. It would be unspeakably tragic if they gained their independence only to starve to death at the hands of their leaders.”

Deng, a former cabinet affairs minister in Salva’s government, is now playing a key role in trying to deal with the political disputes that sparked the fighting. Deng’s group wants an interim government headed by an independent politician who would then prepare fresh and credible elections. There must be a new political dispensation that will be able to reconcile our people and chart the future.

Deng insists there must be wholesale reform of the governing Sudan People’s Liberation army and Movement.

“The crisis that we are facing now originated within the SPLM leadership political bureau over issues of reform, transparency and democracy,” insists Deng.
“We wanted reforms, we wanted democratic changes, and [Salva] and a group of other members in the leadership didn’t like that.”

After pressure from regional IGAD leaders meeting in Addis Ababa for the African Union (AU) summit, Salva released seven of the 11 detainees including Deng into Kenyan custody. Now they are in Addis Ababa arguing for an interim government led by neither Salva nor Riek.

“There must be a new political dispensation that will be able to reconcile our people and chart the future,” Deng insists.
He says this interim government should review the constitution and investigate human rights violations since 15 December, 2013.
He refers to an AU commission of inquiry, but there is no agreement yet on its terms of reference and what judicial powers it might have.
Deng says he is saddened by the schism with Salva, whose “leadership style is not as democratic as I thought.”

The former cabinet minister of South Sudan, Deng is hopeful they can break the impasse in South Sudan: “It’s very difficult for any party to win this war and impose a solution. The only way is a political solution. I don’t think the parties that are fighting
can sustain this war.”

The former cabinet minister of South Sudan gives a rueful smile and concludes: “Our people have gone though this fighting for a very long time. We don’t think we should take them back to the same misery and the same suffering.”  Read the original article on The africareport and the HAN Regional Security Reporters in Addis Ababa.

(in Picture) – Standing Six foot ten inches tall, welcoming hand outstretched and softly spoken but with a beaming smile, Deng Alor Kuol does not come across as the coup-plotter type. Yet it was his arrest with 10 others on 16 december 2013 in Juba on this very charge that triggered the implosion of the South Sudan government and weeks of murderous fighting.

Three of the released political detainees from South Sudan (l.-r.) Cirino Hiteng, former Minister of Youth and Sport, Gier Chuang, and Deng Alor Kuol, former minister of cabinet affairs, address a news conference in Ethiopia’s capital Addis Ababa February 13, 2014.
===
Have you been affected by this story? You can share your views and experiences with us, Send your pictures and comments to  han@geeskaafrika.com
HAN & Geeska Afrika Online (1985-2014), the oldest free independent Free Press in the region, brings together top journalists from across the Horn of Africa. Including Ethiopia, Somalia, Eritrea, Sudan, Djibouti, South Sudan, Uganda, Kenya, Oromo, Amhara, Somali, Afar and Harari. Plus, we have daily translations from 150 major news organizations in the Middle East and East African regions. Contact at news@geeskaafrika.com