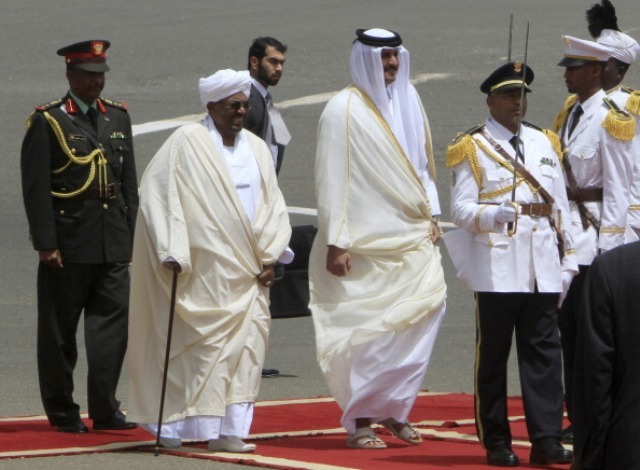 Djibouti (HAN) April 4, 2014: -By Nigel Wilson, Sudan has announced that Qatar will deposit $1bn at its central bank as part of an aid package. Qatar’s emir held talks in Sudan on Wednesday at a time of strained ties with his country’s Gulf neighbors over its perceived support for the Egypt-based Muslim Brotherhood. Sudanese Finance Minister Badr El-Din Mahmoud made the announcement following a state visit to Khartoum by Qatari Emir Sheikh Tamim bin Hamad al-Thani.

Mahmoud also said that Qatar had planned to invest in large agricultural and energy projects in Sudan in the future. He added that the deposit was the second part of an aid package from Doha, but didn’t reveal what constituted the first part. Sheikh Tamim released a written statement that said the visit confirms “the two countries desire for continued dialogue and coordination on issues of mutual interest.”

Not only do Egypt and Sudan share a border, but Sudan is upstream from Egypt on the river Nile, which is an important source of energy, agriculture and tourism for Cairo. Egypt remains engaged in a diplomatic stand-off with Doha, which Cairo accuses of backing the Muslim Brotherhood and meddling in its internal affairs.

The Brotherhood were listed as a terrorist organisation and banned by the Egyptian interim government last year, following the ousting of Mohamed Morsi by the head of the army, Abdel Fattah al-Sisi.

Sisi announced he will be running for the Egyptian presidency in May and he’s widely expected to win the vote. A number of journalists from the Qatari-owned broadcaster Al Jazeera are currently on trial in Egypt, accused of threatening national security in their reporting.