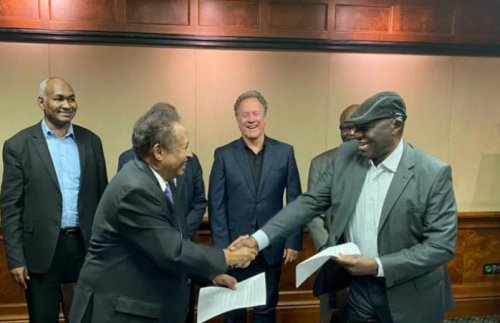 KHARTOUM (HAN) September 15. 2020. Public Diplomacy and Regional Stability Initiatives News. Monitoring Regional Issues.The Sudanese government announced its readiness to send a negotiating team to Juba to resume talks with the SPLM-North under the approach agreed on 3 September by the Prime Minister and the leader of the SPLM-N al-Hilu.

Hamdok-al-Hilu agreement on how to include the relation between the state and religion in the peace talks was discussed Monday in a meeting of the Supreme Peace Council chaired by the head of the Sovereign Council Abdel Fattah al-Burhan, with the participation of the prime minister and the transitional authority top officials.

“The Council appreciated the courageous initiative of the Prime Minister to break the deadlock which for a long time stalled negotiations with the SPLM-N under al-Hilu leadership,” reads a statement released after the meeting.

“The Council declared its support for the Joint Agreement and expressed transitional government’s willingness to send the negotiation delegation directly to the South Sudanese capital, Juba, to resume negotiations () on the contentious issues in the declaration of principles in accordance with the approach agreed upon in the Joint Agreement”.

Abdallah Hamok and Abdel Aziz held a four-day meeting in Addis Ababa from 2 to 5 September upon the request of the latter to discuss how they can include the separation between religion and politics in the peace process, in a way to satisfy the positions of the two sides.

According to the deal struck in Addis Ababa, the issue will be discussed in the peace talks as requested by the rebel group, but such negotiations will intervene after informal meetings including the several parties as well as the SPLM-N.

These informal negotiations would determine the contours of the separation between the state and religion. Initially, the government said the issue of religion will be discussed in the constitutional conference after the peace process.

Recently, there were reports speaking about the rejection of the outcome of Hamdok Hilu meeting by the military component of the transitional authority.

The Supreme Peace Council also declared the government readiness to implement the peace agreement negotiated with the armed groups in Juba.

The meeting also discussed arrangements for receiving the advance delegation of the Sudanese Revolutionary Front which will arrive in Khartoum on Tuesday and Thursday.