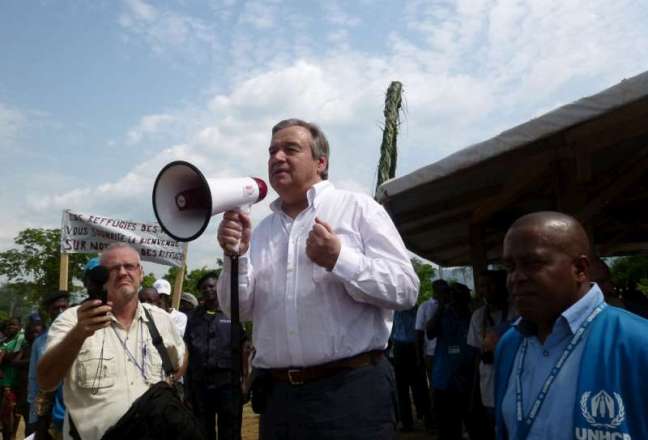 Djibouti (HAN) March 31, 2014 –As the exodus continues of South Sudan into the Kenya and Maban region of South Sudan, the leaders of the UN refugee agency and the World Food Programme paid tribute to the Ethiopian government in Addis Ababa.  There are 122000 Sudanese refugees residing in four refugees camps of Kaya, Yousif Batil, Doro and Gindrassa in Maban area, Upper Nile state, since the start of a rebellion in the Blue Nile in September 2011. The humanitarian official said that Sudanese refugees cannot remain in the camps without assistance or return to their home country and face ” insecurity and daily aerial bombardments from government forces where already half a million IDPs are living with little food and water and no shelter”.

Despite the strain of accommodating such a large number, the regional IGAD countries have opened their border and offered land to accommodate refugees in camps.

Earlier this month, resident ambassadors and UN officials visited the two new camps in Gambella and reported their observations on the situation there to their respective governments.
Last week, the UNHCR appealed for $371 million in immediate relief for refugees who have fled war-torn South Sudan.
South Sudan has been shaken by violence since last December, when President Salva Kiir accused his sacked vice president, Riek Machar, of attempting to overthrow his regime.
The conflict has already claimed more than 10,000 lives, with the UN estimating that some 3.7 million people in South Sudan are now “severely food insecure” while around one million have been displaced by the violence.
Of the latter, over 81,000 have crossed the border into next-door Ethiopia.

-UNHCR, The UN refugee agency, is mandated to lead and co-ordinate international action to protect refugees and resolve refugee problems worldwide. Its primary purpose is to safeguard the rights and well-being of refugees. It strives to ensure that everyone can exercise the right to seek asylum and find safe refuge in another State, with the option to return home voluntarily, integrate locally or to resettle in a third country. It also has a mandate to help stateless people. In more than six decades, the agency has helped tens of millions of people restart their lives.
UNHCR runs a major operation in Democratic Republic of the Congo. Aside from the internally displaced people, it also monitors tens of thousands of refugees from other African countries. It has also helped repatriate refugees from Republic of Congo, Angola, Rwanda and Burundi.
-High Commissioner António Guterres (Photo) addressing refugees from Central African Republic in Worobe camp, Equateur province, Democratic Republic of the Congo.