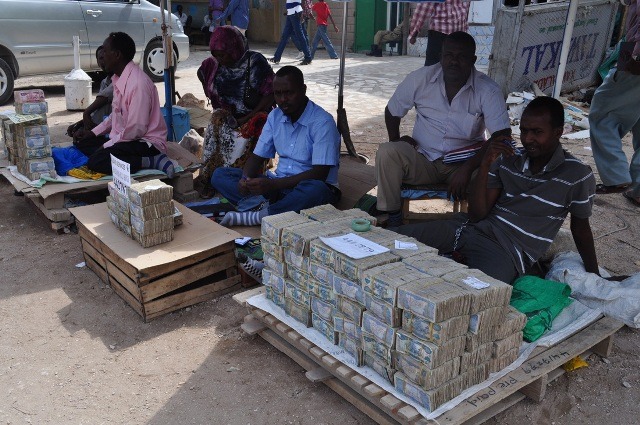 The Somali shilling, Somalia’s official currency, has overcome such disadvantages to appreciate against the US dollar by just under 60 per cent since March last year, becoming the strongest among global 175 currencies tracked by Bloomberg. Its surge has been so pronounced that the second most robust currency over the same period – the Icelandic Krona – could only manage a measly 10.2 per cent rise.

Factors that contributed are:

Donors have pledged billions of dollars to help secure and rebuild Somalia at recent conferences in the hope that it can make good on recent military gains against the militants.
The inflows and modest levels of foreign investment have been largely responsible for the appreciation of the Somali shilling, Payton said.

As a result, the supply of US dollars in relation to the Somali shilling has increased. With shillings in comparatively short supply, the value of the currency has appreciated.
The shilling’s story stands in sharp contrast to the weakness of many other emerging market currencies hit by the US Federal Reserve’s unwinding of monetary stimulus since the start of this year.

Although the functions of the Central Bank were restored in April 2011, the institution has not resumed its monetary policy activities. The Central Bank is awaiting the institution of the Board and of the different committees. Up until 2012, the government had practiced imprudent fiscal policies: large fiscal deficits were financed through money printing and inflation rates skyrocketed. Between 1993 and 1995, inflation averaged 331.2% and in 2010, it was estimated at 300%. This record of high inflation rates, in addition of the instability of the Somalia shilling are amongst the many challenges faced by the Central Bank of Somalia.