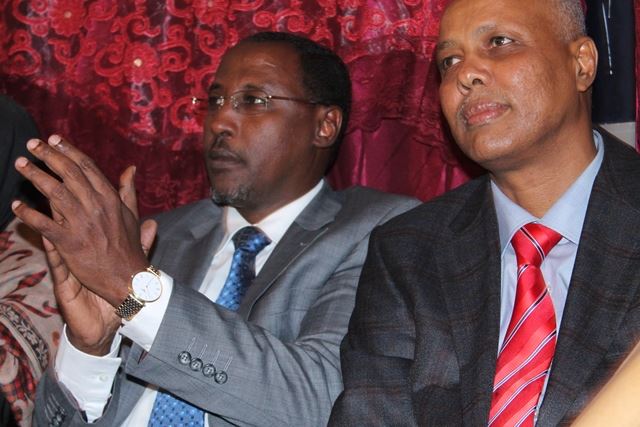 Mogadishu (HAN) April 2nd, 2014 – According to the Office of the Ambassador and Special Delegate of the Italian Government to the Somali Republic , a significant military aid package of Italy, consisting of 28 vehicles to be donated to the Somali police as well as in uniforms and equipment for the Somali Federal Forces arrived with a Hercules C130. The donation was delivered in Mogadishu during an official ceremony. The event took place in Mogadishu in the presence of the Prime Minister of the Federal Government of Somalia, Mr. Abdiweli Sheikh Ahmed, the Italian Ambassador Mr. Andrea Mazzella, the Brig. Gen. Massimo Mingiardi, Mission Commander of the EUTM, and the Col. Bernardo Mencaraglia, Commandant of the National Unit support, the Chief of Staff of Army and Aviation, representative of the federal Government, Ministry of Defense, Foreign Affairs and National Security together with a number of authorities and representative of the local press.
The military and diplomatic ceremony was held at the premises of the Mogadishu International Airport perimeters where both the Italian Contingent of “Brigata Folgore”, operating as ‘quick reaction team’ inside the EUTM mission and led by Gen. Mingiardi, and the Italian diplomatic offices are based and operative since January, 2012.
The Italian military Aid, for a total amount of over one Million of Euro, will strengthen the Somali capacity in fighting the terrorism of ‘Al Shabaab’ matrix and ensure the control over the national territory. Among the equipment handed over to the Federal Somali Institutions, satellite antennas, generators and security systems for the functioning of the Somali Ministry of Foreign Affairs. The armaments are not included in the Italian contribution due to the partial embargo still active in Somalia following the decision of the United Nations Security Council.
“We deeply thank Italy and the Italian people for their continuous support”, Somali PM has declared. By underlying the importance of the commitment of the Italian Government, Mr. Abdiweli pointed out that “Italy is the country that knows us better because of our traditional friendship and solidarity as well as the historical heritage that link our nations together. We look toward Italy in our way to peace and stability”.
The Italian Ambassador Mazzella added that “those donations are the results of a general and renewed commitment of the Italian Government in Somalia at all levels, especially in the last years following the opening of the Italian diplomatic offices. In addition to this, Italy has taken charge of the EUTM mission through the appointment of the Gen. Brig. Massimo Mingiardi as EUTM Mission Commander in January as well as signed cooperation agreements in the field of security with the aim to support the FF.AA. Federal and the Somali. With this regard, the Italian Carabinieri is organizing in the coming months the second edition of training course for two hundred units at the Police Academy in Gibuti.
The Regional Banadir police chief General Mohamed Omar Madaale has commented the military aid and said the vehicles will make a big difference in security.

Italian government last year assisted Puntland with economic infrastructure improvements such as renovating Bosaso port, Bosaso airport, the airports of Garowe and Galkayo, a fishing company that will be established in Ayl, and hospitals,” President of Puntland Prof. Gaas Told HAN & Geeska Afrika Online Reporter.
Italy is also active in the humanitarian and infrastructure sector with aid addressed to the Somali population. The Italian government’s funds allowed the rehabilitation of the “De Martino” Hospital in Mogadiscio and the reconstruction of a medical presidium in Eyl, a village in Puntland that used to be an old pirate base, while works are in progress for the renovation of the Bossaso aeroport landing field, where finally international cargo aircrafts will be enable to bring humanitarian aid to the population.
The Ambassador and Special Delegate of the Italian Government to the Somali Republic, Mr. Andrea Mazzella, welcomes the inauguration of the training course for robust police carried out by the Italian Carabinieri for 200 Somali Police men and women.

The Italian Carabinieri, supported by a team of AMISOM (Pro-Somalia Training Mission) in quality of observer, have inaugurated a training course at the Academy of Djibouti, in order to train Somali Police Forces.
In this framework, the Italian commitment in Somalia, with its increased presence through diplomatic offices and the deployment of qualified official of the Army, should culminate with the reopening of the Italian Embassy in Mogadiscio within the next summer.